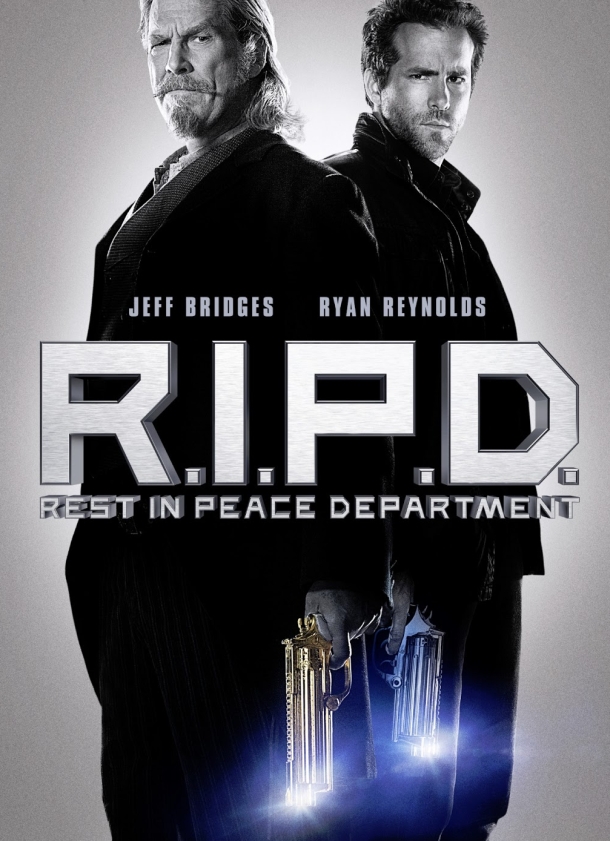 What happens if you moosh Ghostbusters with Men In Black and sprinkle on some Dead Like Me?

You make a monster. Duh! Has Science Fiction taught you NOTHING?!

RIPD Best Mash Up Ever?

This movie has only just been released in Australia.  That’s cool, Hollywood, we gave you Hugh Jackman and Jacki Weaver, but it’s cool….-bottles rage, saves it for later-. I am not going to take my bitterness out on this movie. Well, I might, I’m a terrible person.

If the storyline seems a little familiar, it’s because it’s all been done before. The ‘best of the best of the best’ style rookie cop teams up with a grizzly partner (every cop story ever?) to fight supernatural beings (Men In Black). The supernatural beings are Deados and the Deados are trying to open a sky portal to bring the big bad! (Ghostbusters). Here’s the twist, the people in charge of saving the living? Don’t look like they used to (Dead Like Me).

The other reason it might all seem REALLY familiar, is because it was a comic book before it was a movie. It’s a Dark Horse title.

So, it’s far from original. In fact, if this were an essay, you’d get a big F and sent to the Dean’s office for ‘extensively lifting’ from other’s work. That means, it’s already an up hill battle for the movie and everyone involved.

But, you know what? It wasn’t horrible.

There are some needlessly slow moments that were made all the more needless in hindsight. For example, when Nick (Ryan Reynolds) is drawn towards the light and the explanation that follows, could have been sped up a little. Then there would have been more time to find out about the R.I.P.D universe.

And what a universe!

While I suspect it’s only a small look into the universe created for the R.I.P.D comics, it was an intriguing one. But then, I’m biased, I love cumin. (You’ll get that joke once you see the movie/read the comics). There were also a number of ‘small detail’ moments. A billboard behind a main character, a shot of a banana, these things weren’t needed but having them there made it all the more enjoyable as an experience.

The directing was quite good too. Maybe that’s what made the slow parts seem so gut-achingly slow! The action was fast-paced and the camera angles for the first gun fight alone were really quite spectacular. Not unexpected though, given that it’s Robert Schwentke directing the movie (Remember how good Red was? Yeah, same dude). He also makes his ‘songwriters’ debut in the film with a song called ‘Better Man’. Not quite the same as Robbie Williams or Pearl Jam, but I think you might enjoy it in context of the film.

The acting was great. But what can you expect, when the film’s actor credits look like a combination of all the people you want in films anyway? Geoff Bridges, Ryan Reynolds, Kevin Bacon, Mary-Louise Parker, James Hong and Stephanie Szostak are all pretty impressive names to have show up when the credits roll. But in the same credit list, makes it a nice little treat.

Plus, there’s a few faces you’ll recognise from Entourage, Jim and Glee/My Name Is Earl.

It’s a fun movie. It’s not laugh-out-loud funny (though the guy behind me would disagree, seriously, he laughed at every new scene. Didn’t have to be anything happen, just an establishing shot and he would burst out laughing. I didn’t think it was THAT good). I don’t think you need to see it in 3D. But, it’s a good film and not deserving of some of the harsh criticisms it’s gotten.

Also, Ryan Reynolds is in it and I’ve had a crush on him since he was in Two Guys, A Girl and A Pizza Place. So, I’m going to subtract half a point because he keeps marrying people who aren’t me.