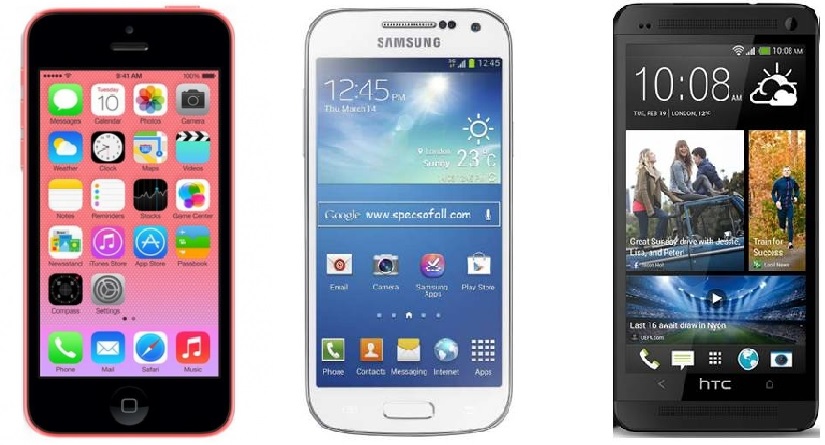 The iPhone 5C was expected to be the budget-version of Apple’s premium smartphone. However, all the phone seems to have lost is a premium build. Powered by an A6 chip that can still hold its own against the best phones out there right now, the iPhone 5C even has a better front camera than the iPhone 5.

Face Off: iPhone 5c Vs One Mini Vs Galaxy S4 Mini

Android manufacturers have adopted a similar practice. The ‘mini’ versions to their flagship smartphones – such as the Galaxy S4 Mini or the One mini, are basically the same flagships phones with a 720p screen and a dual-core processor. And they’re sure as hell not ‘mini’ priced. This kind of puts the iPhone 5C and these ‘mini’ phones in the same category. So how does it hold up against its Android competitors? Let’s find out:

As you may see, there are very interesting differences between the 3 devices. While the iPhone 5C has the smaller screen at 4 inches, it is the only device offering a 32 GB storage option. The Samsung Galaxy S4 Mini however, has an edge in this department – with its expansion option up to 64 GB. HTC One Mini loses out – having 16 GB with no expansion potential.

All the 3 handsets run on 1 GB of RAM, on very capable processors. The Apple iPhone 5C and HTC One Mini have superior display resolutions – having 326 ppi and 342 ppi respectively. The Galaxy S4 Mini, in comparison, is well behind at just 256 ppi. The Super AMOLED screen may attract some people, nevertheless.

The Samsung Galaxy S4 Mini and the iPhone 5C have 8 megapixel shooters, while the camera on the HTC One Mini is 4 megapixels. However, it’s an UltraPixel camera – HTC’s attempt to improve low light photography without sacrificing on quality. The UltraPixel camera may be great for night time imagery, but it has received its share of criticism for losing sharpness on regular images.

Botht the HTC One Mini and the iPhone 5C are available at $99 for the regular 2 year contract. The choice between the two therefore, only depends on your battery life expectations, and of course, your choice of platform – iOS or Android.

If you’re buying unlocked, the Galaxy S4 Mini comes into the picture. While it features an inferior display – there’s more RAM, more battery, and the best front camera among all the 3. It also has the maximum storage option. But at $580, it ends up on the expensive side.

R.I.P.D the ‘Down Under’ review