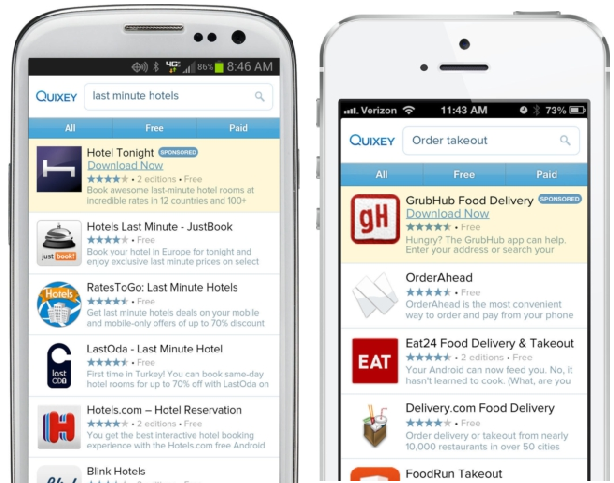 How about having a search engine dedicated to apps? Consider this: you want to buy movie tickets for your favorite theater chain. You search with that brand’s name, and instead of having to go to its website, you’re offered a link to download its App, for your platform – Android, iOS, Windows Phone, anything. Next time you want to book tickets, you won’t be searching again, would you?

Today there is an app for almost every single task or job that you may want to pull off. Thousands of apps are added to different OS ecosystems every day. While using an app can make life a lot easier for you, it is also hard for developers to promote their apps in order to gain maximum reach. With the Sponsored Apps program, developers will not only get their apps promoted, but will also be able to tweak their promotion strategies based on data analysis from the search.

The millions of apps already in the ecosystem continue to multiply across platforms, and as they do, the clutter also intensifies. With in-app ad spend poised to reach 7 billion dollars by 2015, Quixey aims to help the developer, the advertiser and the user – traditional in-app advertising models which often display distracting banner ads don’t accomplish that. Successful app discovery tailored to intent is the critical solution. – Richard Gregory, EVP – Revenue, Quixey.

The service is currently in Beta, and there is no word on when it’ll be launched publicly.

Quixey is a search engine for apps located in Mountain View, California. It is the company behind ‘Functional Search’, which provides app search results by that gathering app information from review sites, blogs, social media sites, and other sources. Quixey partners with Microsoft, Sprint, Ask.com and other firms and powers their searches, numbering more than 100 million a month.

Age of Empires Coming To Android and iOS