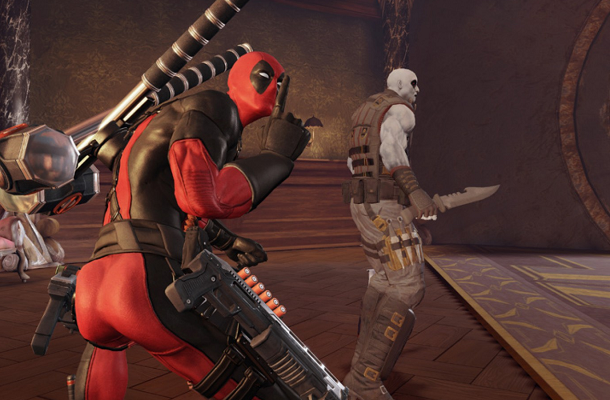 Comic fans have been waiting patiently for the arrival of Activision’s Deadpool later this year. Luckily for me, I was able to have a go on the first public demo of Deadpool for Xbox 360 at MCM London Comic Con. Marvel’s merc-with-a-mouth may have only had a brief appearance outside of his comics in X-Men Origins: Wolverine, but Deadpool’s popularity has grown rapidly in recent years, so the announcement of a Deadpool video game was a welcome surprise. But does developer High Moon Studios have what it takes to do Deadpool justice? Find out in Geek Insider’s preview of Deadpool! 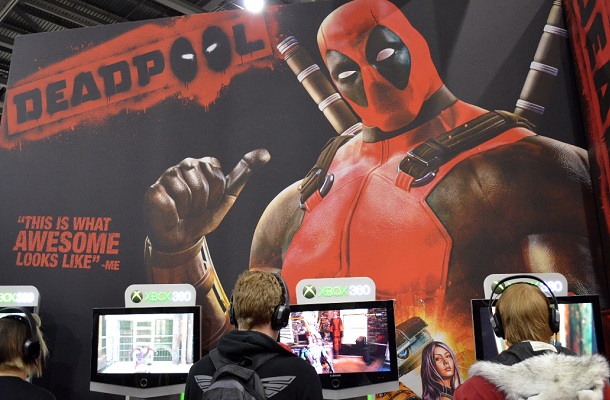 Deadpool: Three Characters in One!

For those who are not familiar with this particularly peculiar Marvel character, Deadpool is a mentally unstable mercenary with super-human agility and strength, as well as proficiency with various weapons. Deadpool also has an extremely potent healing factor that even allows for him to reattach his own severed head, rendering him essentially invincible.

But Deadpool’s defining characteristic isn’t his super-powers, but his knowledge of being a comic book character and the numerous alternate personalities that inhabit his warped mind. As such, Deadpool is constantly breaking the forth wall and using the comic book itself to his advantage. In fact, in our review of Deadpool Killustrated #4 we explain how Deadpool even jumped into other classic works of fiction to assassinate their heroes!

Deadpool’s Combat is Shallow Yet Functional

The Deadpool demo at MCM London Comic Con contained two levels. The first level took place in Deadpool’s dilapidated home and acted as a comedic introduction to the character while the second level focused on gameplay rather than narrative. Seeing as the associated staff imposed a strict 10 minute time limit, I decided to play the second level in order to get to grips with Deadpool‘s controls and gameplay.

The controls are simple: Press X for light attacks and Y for heavy attacks on the ground or in the air. Pressing X repeatedly results in Deadpool performing a combo which can then be ended with a more powerful version of Y’s heavy attack.

Those who played Platinum Games’ Metal Gear Rising: Revengeance or Anarchy Reigns will instantly recognise the type of simple yet effective combat present in Deadpool. Unlike those two games however, Deadpool‘s combat lacked fluidity and at times felt a little clunky. Additionally, it didn’t feel as though Deadpool’s attacks were doing much damage. Although most enemies could be hacked to bits after just one simple combo, Deadpool’s swords and other bladed weapons felt like they were going straight through them as if they were made of butter.

Deadpool also has the ability to teleport by pressing the B button, which allows for quick escapes or ambushes. The move is also used to continue a combo started on one enemy, on another nearby enemy, by teleporting directly to them. Although I desperately tried to nail down the use of the teleport during combat, it almost always resulted in Deadpool teleporting off to some undesired location. It’s an interesting idea and will hopefully be tweaked before the game’s release.

It’s definitely a functional and easy to grasp combat system, and it certainly doesn’t have any major issues, but the game itself didn’t seem to give much feedback when attacks connected with enemies; aside from the comical splattering of blood and the intentionally cheesy “squelchy” sounds.

Deadpool is on Form Thanks to Nolan North and Daniel Way

While bringing Deadpool the super-human into the world of video games seems like a relatively simple task, bringing over Deadpool the wise-cracking comedian is slightly more tricky. Fortunately developer High Moon Studios have jumped this hurdle by directly involving Deadpool comic book writer Daniel Way in the creation of the game’s narrative and script. Many players may be sick and tired of hearing Nolan North’s voice pop up in so many games this generation, but the famed voice actor does a genuinely good job with Deadpool and his other two distinct personalities.

Deadpool’s own persona, and the character that we play as, is a hyperactive adult that enjoys toilet humour and telling himself silly jokes. Deadpool’s own thoughts are constantly being interrupted and added to by a hormone fuelled, child-like voice and the voice of an older, wiser, yet nonetheless insane war veteran.

Yep, Deadpool is As Funny As You Hoped He’d Be

It’s thanks to these two extra voices that the comedy in Deadpool really shines through the somewhat mediocre gameplay. Many comedy-driven video games rely on the main character randomly spewing out one liners Duke Nukem style. Because he has three personalities, Deadpool can tell himself jokes that the other personalities will find funny, stupid or downright offensive as well as telling fourth-wall breaking jokes to the player. 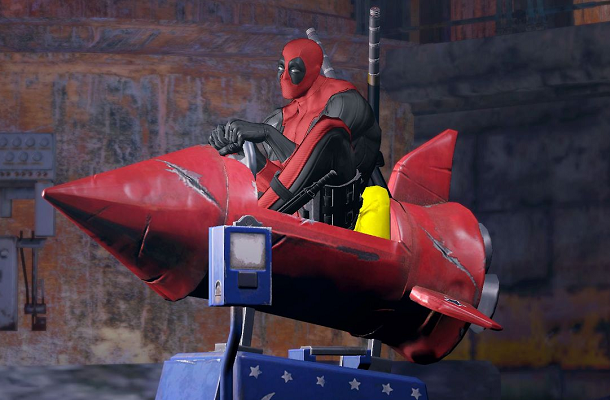 The other hilarious aspect of the game is that Deadpool is essentially making up the game as he goes along and commenting on video game staples as necessities that he would otherwise not need. For example, after slashing up the first bout of bad guys, Deadpool explains to us that enemies “Deadpool Points” which can be be spent on extra weapons and extra moves to make Deadpool more badass.

“Buts that’s impossible!” squeals the kid-like voice, to which Deadpool responds “I know, but it’s ‘Game Progression’!”. Even the on-screen prompts come straight out of Deadpol’s mind such as the tutorial message that states “Just do whatever High Moon tell you.”.

Deadpool went far beyond my expectations. In all honesty I had thought that Deadpool would be comprised lame jokes backed up by mediocre gameplay, but the demo at MCM London Comic Con proved me wrong. It was a shame that my time with the demo was limited, and I wasn’t able to fight any enemies other than basic grunts, but I liked what I played.

It’s fast, it’s funny, it’s original and it’s out on June 25th for Xbox 360, PlayStation 3 and Microsoft Windows. Deadpool is definitely a game that Marvel comic book fans should keep an eye out for!

The 5 Most Expensive Watches in the World