Play NES and SNES Games Anywhere with the RetroDuo 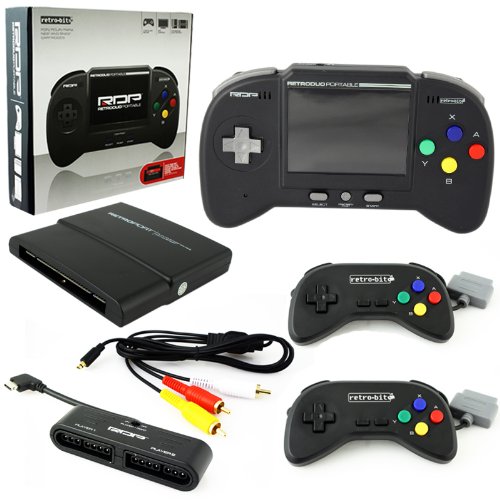 Both Nintendo and Sega have been large components of the portable gaming industry, during at least one point in time. Sega had the Game Gear, which is now a part of history, while Nintendo continues to follow the success of the Game Boy with the DS. In some ways, the Game Gear mimicked the experience of the Sega Genesis, with similar graphics and game play, while Nintendo focused more on creating a new gaming experience. Regardless, what these systems were never able to do was to give consumers the ability to play classic console games exactly how they were. Wouldn’t it be awesome to be able to play NES, SNES and Sega Genesis games on a portable system?

I saw this concept a while back on a blog post found through StumbleUpon. It was a step-by-step guide on how to make a portable Nintendo system using an old controller. It was a great guide, but in order to follow it you had to obtain a small monitor and other electronic parts that are not easy to find. Now the concept is open to consumers, fully assembled. The RetroDuo can play all of your old-school Nintendo games just by sliding the cartridge in and turning the power on: the beauty of simplicity. Although the standard port fits Nintendo cartridges only, the included RetroPort adapter allows you to play Super Nintendo games as well. You can also purchase the RetroGen adapter to play Sega Genesis games on the device.

The built-in rechargeable battery will give you up to 8 hours of gaming time. Along with playing it on the go, you can take the RetroDuo to the big screen by using the AV cable. You can then plug in the Dual Controller Port Adapter and play using the included controllers or your own. It also comes with a stand up dock, so the system rests securely on a flat surface and keeps the cartridge in place.

Heists And Other Updates Coming to GTA Online