Phil Fish has made a statement confirming that not only is his unique puzzle plat-former Fez, due to be ported to other platforms sometime in 2013, but that future games are on the way. The announcement was made via a post on the Canadian developer’s company website, Polytron Corporation, in which the somewhat infamous indie developer reflected on the events of the following year.

“We experienced abyssal lows, but also life-affirming highs. Life-changing highs.Really, really high highs. It took everything but we shipped the f***ing thing (Fez). And it was a success.

It didn’t break any records, but it made more than enough to let me keep doing what I do. So I’m afraid you’re stuck with me for a little while longer.”

Although originally being announced in 2007, it was over four years until Fez was released exclusively on Microsoft’s Xbox Live Arcade service in April 2012. During that time the game suffered from several lengthy delays caused by a lack of funding, legal issues from Fish’s ex-business partner Jason DeGroot, as well as family problems; a series of events that were well chronicled in the suburb feature length documentary Indie Game: The Movie.

Despite its bloated development cycle, Fez was met with unanimous praise from the gaming press for its unique take on 2D plat-forming that allowed for the game’s perspective to be shifted 90 degrees left or right at any time. Unfortunately for Phil Fish, Fez’s release was the beginning of further troubles.

“Between the game and the documentary, too much happened. Too much to process. I feel like I learned something, but I don’t know exactly what it is yet. Keep your mouth shut maybe?” 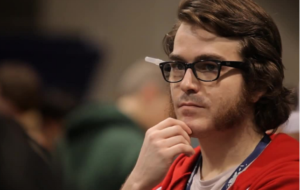 Fish is of course referring to his comment made at 2012’s Game Developers Conference. Fish, who sat on a panel promoting the aforementioned Indie Game: The Movie, was asked by Japanese developer Makoto Goto for his thoughts on modern Japanese games to which Fish replied “Your games just suck,” Matters were made worse by what many consider an irresponsible follow up comment made via Twitter.

“I’m sorry japanese guy! I was a bit rough, but your country’s games are f***ing terrible nowadays.”

Even if Phil Fish himself is unlikable, the appeal of Fez is undeniable and the idea of it being made more accessible by porting it to several other, although at this point undisclosed, platforms will be a great stride for indie game development. As for future games and the future of Polytron itself, Phil Fish couldn’t have put it any better.

I hope you’re excited too!”