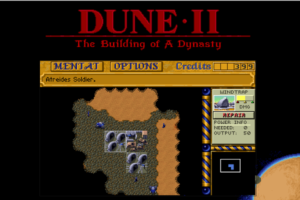 Establish base, gather resources, build army, crush opponent. This simple series of events is the backbone of any real time strategy game (RTS) old or new and will be familiar to fans of StarCraft II back through to the original Command & Conquer. The progenitor of this template, Dune II, was developed and released back in 1992 for MS-DOS and has since then been widely regarded as one of the most influential strategy games of all time. It’s only fitting then that over 20 years later, the game has been faithfully recreated as a HTML5 port, allowing this landmark title to be played for free through essentially any modern browser.

This humbling tribute to Dune II was created by Russian developer Aleksander Guryanov who based his version off a separate project titled OpenDune, which is itself an attempt to create a fully open source version of Dune II for other developers to build on. This project is similar in nature to Aditya Ravi Shankar’s extremely impressive HTML5 version of Command & Conquer and is another great example of HTML5’s potential to offer console-type gaming experiences via a simple web browser.

The original version of Dune II was published by Virgin Interactive and developed by now defunct Westwood Studios for MS-DOS, with subsequent ports being released for the Amiga, RISC OS and the Sega Genesis/ Mega Drive. While being based on a combination of Frank Herbert’s Dune novels and David Lynch’s 1984 Dune film, the game introduced its own non-canonical story-line which saw the campaign split between House Atreides, Harkonnen and new House Ordos; as they battle over the governorship of planet Arrakis and the precious drug ‘spice melange’ that is found there. 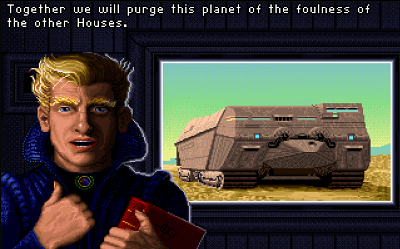 This HTML5 port runs absolutely fine from within common desktop browsers such as Google Chrome, Microsoft’s Internet Explorer, Apple’s Safari and more; taking mere seconds to download on most broadband connections, with each of the three campaigns being roughly 6mb each in size. Dune II may look a little worse for wear 20 years on, it is still fully playable with fans of the game being able to use the same keyboard hot keys,  present in the original version.

So if you’re a slightly older gamer, who has fond memories of gaming’s first foray into the world of real time strategy, or if you’re a youngster unable to scratch that retro gaming itch, head over to Play-Dune.com and squeeze, squeeze, squeeze for that precious spice!