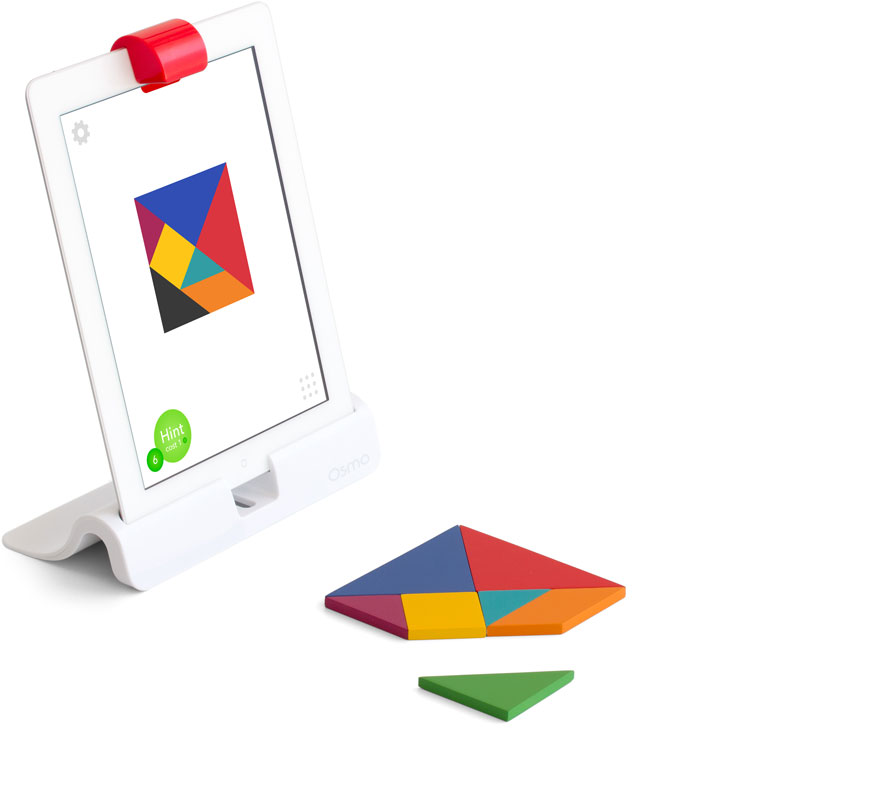 A new app called Osmo is solving a childcare problem with a simple compromise. Anyone that’s ever taken care of kids knows that all they want to do is watch TV or play games on consoles or tablets. While Osmo games use technology to keep kids interested, its game play is grounded in real world objects. Players use puzzle pieces, game tiles, pen and paper drawings, and literally any of their own favorite toys to complete to game objectives. Kids can now play word games, complete puzzles, and win simple strategy games while playing both in the real world, and through technology.

Osmo is, in practice, an extremely simple gaming app designed for kids ages 6 through 12. The concept of the app is more complicated. The tablet is set up in a stand, and a mirror is clipped over the camera, which angles it downward. Once the downloaded software is open, it senses the physical objects that lie in front of it. When the game pieces are moved, the interaction is shown on the upright screen. When the player succeeds in the analogue portion of the game, the digital portion makes the experiencing of solving a puzzle more rewarding by flashing and making sounds.

Osmo was created by a company called Tangible Play, which is made of up a number of ex-Google employees. One such developer is Pramod Sharma, who has witnessed the interaction between physical objects and digital displays when he working on Google’s book scanning device. Sharma was inspired to create Osmo by his own experiences as a parent, saying that his daughter “could literally spend hours just looking at a screen, and doing nothing else. And as a parent, this is obviously concerning.” Now, with Osmo, children can not only employ their imagination with the physical pieces, but can also play together, and interact with each other in an inspiring game that is both high tech and extremely simple.

Oh, The Games You Could Play!

Osmo has three complete games that come with the starter pack. The first is Tangram, which is a set of colorful blocks that can be arranged into different shapes, such as animals. The screen follows the movements of the blocks, and informs the player when they’ve connected two pieces properly. The second game is called Words, and is an educational, hangman-esque team game, where players race to use the letters in the featured words. Their last game is called Newton, which may be the most exciting and creative of the three. The objective is to cause the falling balls to touch the targets. Players can do this through any means, by drawing lines on a paper, or by placing other objects to make the balls bounce.

At the moment, the planned retail cost for the Osmo game kit is $99, but for a limited time their website is allowing a half price presale, in order to raise production costs.