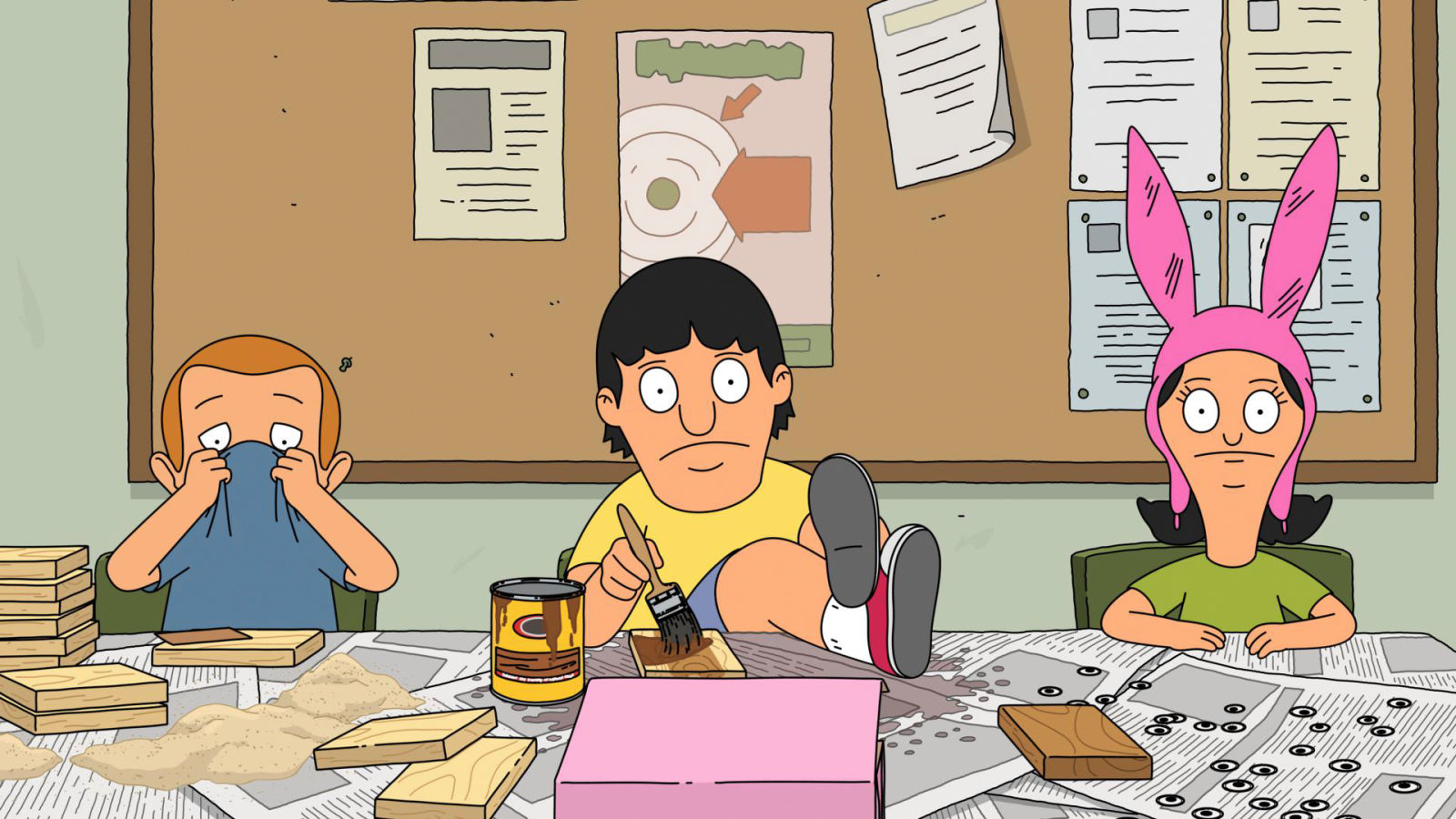 Remember how I said a couple of weeks ago that Bob’s Burgers was different from the other Fox Sunday animated shows because it avoided politics and controversial topics and just gave us fun stuff to watch? Well, that was mostly true. But on the rare occasions when the show does venture into the realm of social commentary, it’s handled very well. “Tweentrepreneurs” is a hilarious takedown of corporate America in general and the cellular phone industry in particular, and it’s a thing of beauty.

For small business class credit, several of the Wagstaff kids form a business to produce and sell the Wood Chuck, a Jimmy Jr. original creation that’s basically just a block of wood with googly eyes and a drawn-on smile. The Belcher kids and Rudy (the regular-sized one) are the manufacturing team while the other kids handle sales and other management responsibilities (which mostly consist of eating snacks and drinking soda). Of course, just like in the real world, the laborers start to feel taken advantage of (understandably, in this case), and the sales and management kids don’t understand why the laborers can’t just work harder. Management’s solution? Hire Tina as the liaison between the two groups, which just alienates her from the labor force and makes things worse.

Anyone who’s worked for a company of just about any size can relate to this, especially if you’ve been a worker bee and felt like those in Sales, Marketing, and/or Management had little to no appreciation for your contribution to the company’s success. And then, to make matters worse, they just want you to produce more units in less time, which invariably leads to sub-par products and/or unsafe working conditions. Ultimately, that leads to fewer sales, which gets everyone’s attention.

So what does the Wood Chuck company do? It does what just about every tech company (especially the cell phone companies) has been doing for years—it introduces a new version of its product that may or may not be better than the old one (in this case, it’s definitely not), but it’s different, and it’s new. Tina sums up the thought process of many tech executives when she says, “I believe people will buy anything with a higher number than the model that came before it.”

But tech consumers are generally savvy, and bad products don’t last very long. Wood Chuck 2 is just awful, and it causes splinters, and so it doesn’t sell. It’s not until Tina convinces everyone to treat each other as equals that they come up with the idea to sell the Could Chuck, which is just a pair of googly eyes that you can do just about anything with. It gets them out of debt with Edith and Harold and saves their grade—instead of an F, they actually get a B minus (which is a Belcher A!). And maybe they also learn some valuable lessons about how to run a business one day.

Speaking of running a business, Bob and Linda will never be that good at it. When the same customer (voiced by Thomas Lennon of Reno 911! fame) pulls a dine-and-dash on you twice, then uses a combination I-have-an-evil-twin/you-gave-me-the-wrong-change ploy to steal a third meal, you should probably rethink your entire business model. But, as Tina says, Bob’s a good bad businessperson, and maybe that’s what counts. He’ll never be rich, but he’s an honest guy who makes a really good burger. That has to count for something.