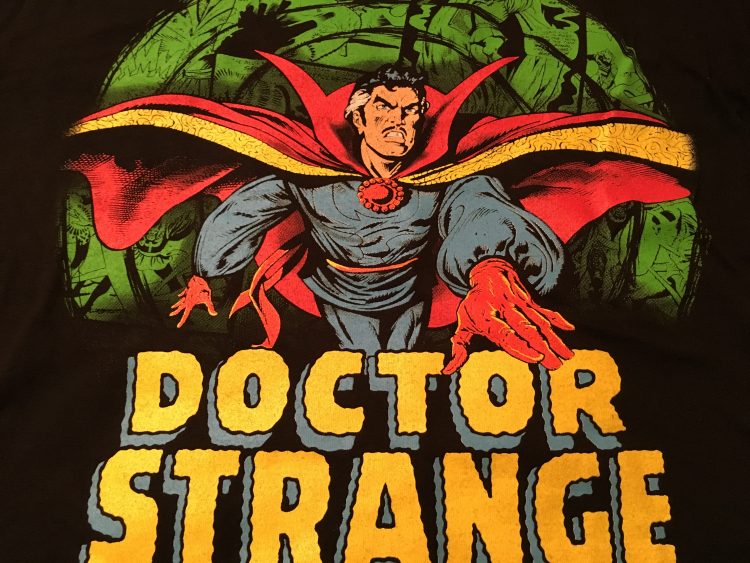 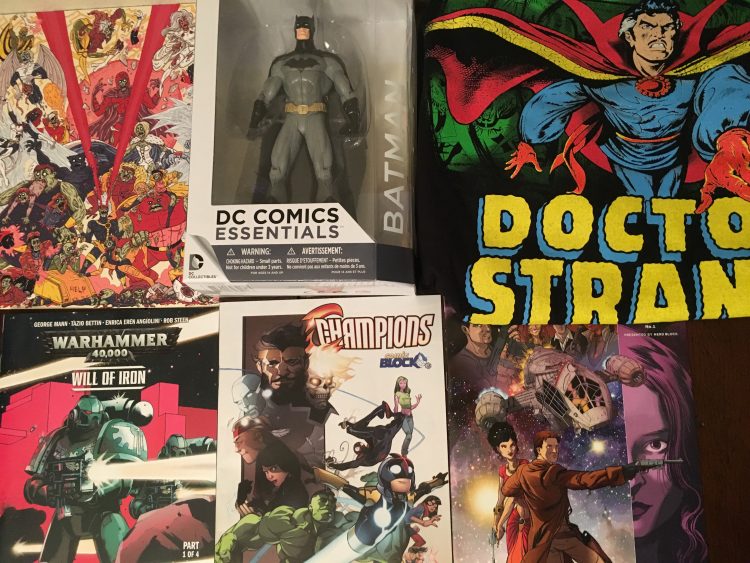 In what will be my last review of Comic Block’s monthly subscription, this particular box is reminiscent of the spookiest season of the year while preparing the subscriber for a certain strange debut in November. It’s a box which celebrates our favorite dark themed and alternative storylines. Fellow geeks, behold the contents from the latest box from Comic Block.

Celebrate the Surreal with this Dr. Strange Tee

One of Comic Block’s monthly promises is a one of a kind tee from their exclusive catalogue and this month’s featured selection does not disappoint. In honor of Dr. Strange’s debut movie this month, Comic Block supplies the subscriber with a shirt inspired by the art of Steve Ditko. Dr. Strange is seen emerging from a green glyph of retro comic panels featuring the Sorcerer Supreme. The splash of greens, yellows, blues, and reds make for an evening under a black light even more fun; that is if you have one next to your “incense.” If psychedelic evenings discussing philosophy and space exploration aren’t your style, then this tee should at least accompany you as you watch Dr. Strange in 3D. If there was any movie made for this medium, it would be Dr. Strange.

The Batman Collectible and Marvel Zombies

Again, somewhat treading along the lines in relation to October and the mystic arts of Dr. Strange, is a DC Comics Essentials Batman figure. With detailed work showcasing that this is a far step away from your 90’s area figures with cloth capes and basic color swaps, this figure is somewhat of an updated look to Frank Miller’s short eared Batman. The variant editions are Wonder Woman and Aquaman, but I was fortunate enough to get something that tied the whole box together; not too sure if either of those two would have.

Remember a few years ago when Marvel jumped on the zombie band wagon and even did a mashup with Ash from Evil Dead? A few storylines continued and from that Marvel writers and artists seemed to have fun with the bizarre, humorous, and gruesome tones. It was a storyline that didn’t care too much for continuity as readers just had fun with the series. Well now all the brain eating adventures are complete on this Marvel X-Men Zombies 8×10 poster. 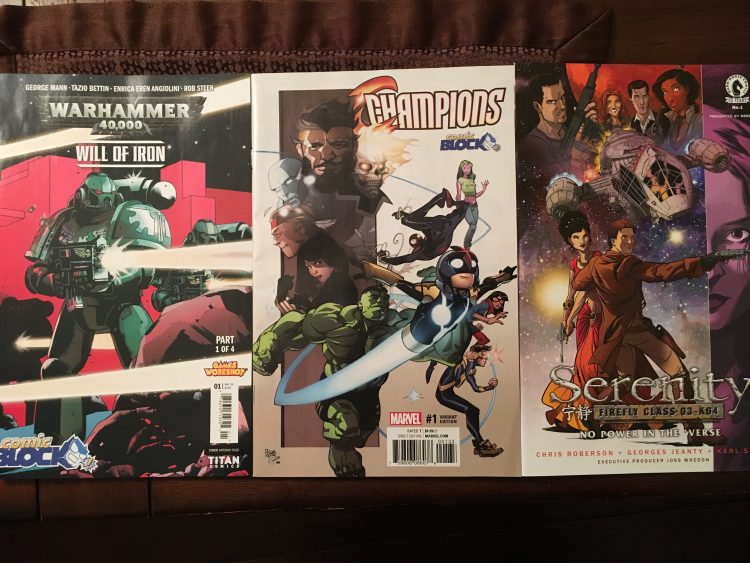 Not referring to any problems with the box, but rather than the accompanying issues that bear the Comic Block exclusive variant covers. For the strong following of Firefly, Comic Block offers a brief glimpse of the ongoing sci-fi series in this number 1 issue by Chris Roberson (script) and Georges Jeanty (art). While I will admit that I haven’t been one to follow the TV series or movie, but do know the names and significance, I can honestly say that this issue was enjoyable. Though I am clueless to the whole who’s who importance, the story does do a good job in creating moments of suspense. It sounds like a great start to a promising series. Warhammer 40,000 first issue was also included in this box, and again maybe this is something that has a huge following. I, on the other hand, read it for what it was, and it’s a nice mix of fantasy, sci-fi, and historical inspired themes. Though something like that may seem a bit hard to juggle, Warhammer’s writer and artist does succeed marrying all the concepts.

And alas, the other issue is the 1st variant edition of Champions, the debut story of how the new wave of young and multicultural Avengers are finding a way to rebrand themselves outside of being Avengers. With the new characters’ overwhelming sense of duty and defiance to killing, this new series will work wonders with an emerging young Marvel fan base. With words by Mark Waid and work by the legendary Humberto Ramos, this series is bound to entertain all.

Comic Block and their relative Block editions (Nerd, Horror, Arcade, and Sci-Fi) are filled with exclusives and limited edition pieces that is sure to entice the inner geek in us all. With the upcoming holiday season around the corner these Blocks will offer the needed stocking stuffers and gift ideas for your circle of geeks or the office weirdos. Until next time, cheers!

The iTunes 99 Cent Movie of the Week: ‘Eye In The Sky’

‘Fantastic Beasts’ Inspired Clothes and Where to Find Them