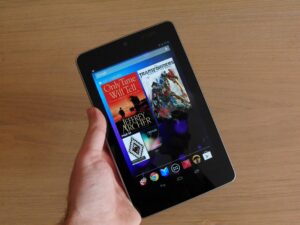 June 28th I purchased the first version of the Google Nexus 7, 16 GB.  It cost me $249, and I honestly haven’t regretted it.  While sitting around a table with friends or coworkers they constantly ask me, “Why didn’t you buy the iPad?  Or the iPad Mini?  Why a Nexus 7?”

Well, here you go everyone, this is why.

Secondary reasons I jumped for the Nexus 7 were; cost, OS, speed, integration, resolution, etc.  Each was only slightly less important than the size, and influenced my decision significantly themselves.  Excluding the iPad (at the time), since I was thinking extreme portability, there were still a host of phones and other tablets to choose from.  I still chose the Nexus 7 for the reasons below:

Those are the big reasons.  However, there are some downsides either I or my friends have noticed.

At the end of the day, I haven’t regretted buying the Nexus 7 when I needed it back in June.  I haven’t regretted not waiting for the iPad Mini launch, or the revamped 2nd gen model, nor the host of other comparable devices on the market.  My Nexus 7 works great, and it’s convinced me to buy a Nexus 4 too.

Do you own a Nexus 7? What do you like or dislike about it? Let me know in the comments below.