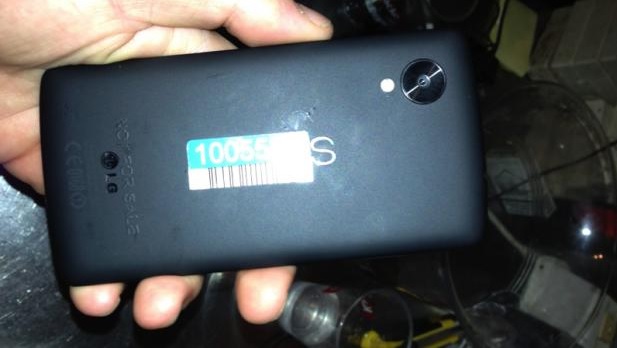 A Google employee walks in to a bar. What next? He leaves his yet-to-be-released Nexus 5 right there! Videos have emerged of a Nexus 5 that was reportedly forgotten there by a Google employee.

Bars and smartphones seem to have an inseparable relationship. Many bars have been involved in high profile leaks of upcoming smartphones. Gizmodo’s infamous iPhone 4 leak (which was left at a bar by an Apple engineer), or the case of the Nexus 4 (left at another bar, covered by Wired) are some of the famous cases. This time again, we’re seeing a Nexus 5 left at another bar.

A bar employee picked up the abandoned Nexus 5 and managed to record very brief videos. There isn’t much to them as the phone is locked by a PIN. The videos were released on 9to5Google.

In other news – Google’s Nexus 4 has been sold out in the US. Google will not be shipping more units, quite obviously to make way for the Nexus 5.

This isn’t the first leak of the Nexus 5. Google itself accidently let it loose on the promotional video for Android 4.4 KitKat. The video was taken down immediately after the news broke out.

There’s been more. It has recently passed through the FCC, and subsequently had its its specifications leaked.

According to FCC documents, the 5 is expected to ship with a quad-core Qualcomm Snapdragon 800 processor clocked at 2.3 Ghz alongside 2 GB, or possibly even 3 GB of RAM. It should feature a bigger screen than its predecessor – 5 inches of full HD display.

it will run on Android’s upcoming update – 4.4 KitKat. The cameras on the device are expected to be capable of 13 megapixel images on the back and 2 megapixels on the front. All of this should be powered by a 2700 mAh battery.

As for connectivity – the phone will have the usual Wi-Fi a/b/g/n support, Bluetooth 4.0 Low Energy (supported on Android 4.3 and upwards), and NFC. Unlike its predecessor, the Nexus 5 will support 4G LTE connectivity. The phone will also include Qi Wireless charging support.

The phone is codenamed D820, and has been manufactured by LG, contrary to what the company’s executive had reportedly said back in May this year:

“The Nexus 4 was a great succes, even with the supply issues and we have a great relationship with Google. But we won’t make the Nexus 5.” – Kim Wong, Vice President, LG Europe – May 2013

The Nexus 5 is expected to launch sometime in October this year, at Nexus 4 pricing.