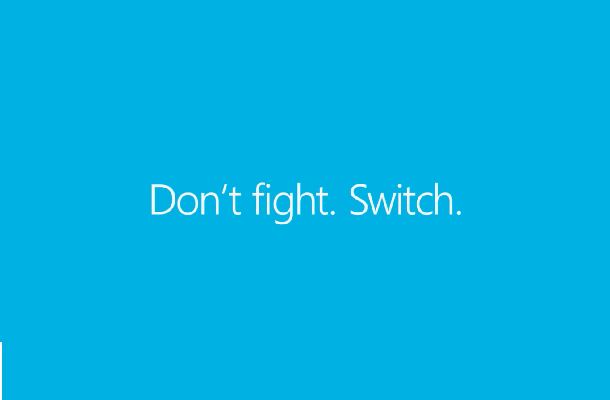 As part of Microsoft’s “switch” campaign, with the ailing company always pointing out exaggerated flaws in iOS and Android, and urging users to “switch to Windows Phone”, Microsoft has released yet another advert that features guests fighting over their devices at a wedding.

The advert depicts a wedding, where a guest seems to be using a Samsung phone to click photos of the couple. He is interrupted by another guess who taunts – “Excuse me, would you mind removing your enourmous phone?”

The Samsung guest goes on to show off his phone’s NFC capabilities, and shouts back “Aren’t you too young to have an iPhone?” to another woman. Mayhem ensues, with guests – all of them owning either an iPhone or a Samsung Galaxy, fighting with each other over their phones.

The advert takes a shot at many of the popular shortcomings users of the two phones throw at each other – like when a guest is sent flying across the floor when hit by a big Galaxy phone, or when people trade insults, calling each other “iSheep” or “copybox”.

Nearing its end, two servers are shown discussing whether the guests would’ve fought if they had been using a Nokia Lumia – clearly an attempt to highlight Windows Phone as a better alternative to both phones. It’s a light attempt at convincing users to switch – but Microsoft’s consistent attitude – that of attempting to demean the two platforms instead of working on Windows Phone’s own shortcomings – is pretty clear.

The attitude isn’t restricted to the smartphone market – the company has also received criticism for its controversial “Scroogled” campaign – targeted at Google’s privacy policies. Last month, Microsoft also release an Android app – “Switch to Windows Phone” to make it easier for users to switch from Android to Windows Phone. In November last year, Microsoft had also launched an ad campaign convincing users to ditch their iPhones for Windows Phones. Basically, company seems to be doing everything except for working on the shortcomings of its own platform.

Whether this attempt works or not is debatable. Nokia managed to sell a record 5.6 million Lumia handsets in the first quarter of 2013 – but also faced a significant sales decline of 33% in the North American market – managing to sell just 400,000 units. 19.9 million Lumia devices have been sold in almost 1.5 years between November 2011 and March 2013. To catch up on the high-end of the market, Nokia might be launching the first quad-core Windows Phone handset – the Nokia EOS soon.

Windows Phone’s US market share has now risen to 4.1% for the last quarter – still dwarfed by both Android and iOS.