Just when I thought the internet wasn’t funny anymore, I read something that completely changed my mind. It didn’t just change my mind, it actually blew my mind as well. So, I’ll warn you before going any further, what you’re going to read could prove to be very funny and highly stupid at the same time. We’re definitely not responsible if you fall off your chair laughing and break something in that “fit” body of yours. According to Batman’s loyal butler, Alfred, some people just want to watch the world burn and Henry Gribbohm is just one of them. 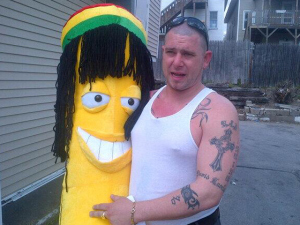 Man With a Stuffed Banana

As we all know that Microsoft’s motion sensing wonder, Kinect costs nearly $100 and you could even score one for a much lesser price if you scour the internet like a deal hunter. Although, Henry Gribbohm just found that out the hard way. He went to a carnival and gambled away $2,600, just to win a $100 Kinect for a kid. Yeah, that’s true! he smoked away all that money just to get a Kinect. He could have bought more than 25 Kinects with that money, but no he just wanted to “Win” it. In the end, all he got for his efforts at the carnival was a Man-size Stuffed Banana with Dreadlocks and a “F*** you” smile.

You’re expecting the kids to win a few things, let the kids have a good time. It just didn’t turn out that way. – Said Gribbohm to CBS Boston.

According to the guy with a stuffed banana, he just went to a Manchester carnival to have a good time where he played a betting game called Tubs of Fun (Lots of fun). He said that during practice he played the game like a champ and mastered it, but while playing for the prize everything went downhill for the poor guy. According to Gribbohm, the game was changed when he started playing for the prize, it was rigged. So, in the end he lost a total of $300. However, things didn’t end there. Gribbohm was determined to win the Kinect sensor, so instead of quitting and going back home, actually he did go back home, but just to come back with an extra $2,300 cold hard cash and spent it all in an infinite number of failed attempts. Now, the guy’s totally pissed and is suing the whole carnival for it, he claims that the game was rigged to rip off great players like him.

I feel pretty sad for the guy but lets be honest, his skills at throwing balls are as bad as his know-how of Kinect.

For once in my life I happened to become that sucker. It was foolish for putting up my life savings. – He adds.

Life Savings for a Kinect; Not a bad deal

Wait, did you read that? “Life savings”, so the guy actually gambled away his life savings just in order to buy a $100 Kinect and to be honest, Kinect isn’t even worth the $100.

What are your thoughts about the guy’s utter persistence? Do you feel sad or happy for his loss? Well, at least he learned his lesson.