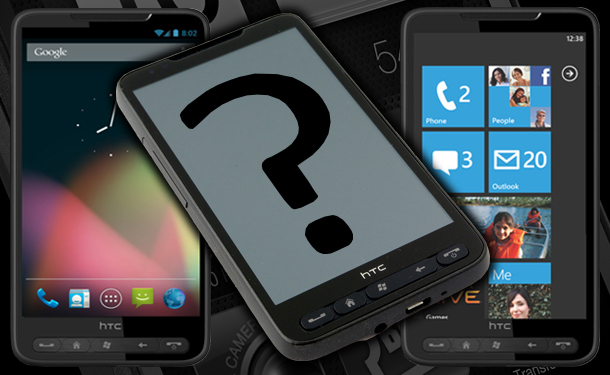 It’s only been just over four years since HTC shipped the HD2, their new Windows Mobile flagship. It was received as a behemoth at the time, a great big tank of a phone ready to conquer the world and revive the fortunes of the struggling Windows Mobile platform. As such, it was desperately unfortunate for HTC that WinMo (as it was known, though not with much affection), already on life support, was so soon relieved of its misery by plainly superior upstarts. With it went the HD2, sinking into obscurity from which it would never esc— wait, what’s that? Active development? Not slowing down? That just doesn’t seem right. Time to put on my investigating gloves, my detective work hat, and my astute observation necktie, and figure out how the HD2 became the cockroach of the phone family.

That tells you a lot about how the original state of the HD2 stacked up even a short time after it was released. Hinting at the shape of things to come, HTC customized the interface, adding a relatively touch-friendly front end to compensate for Windows Mobile’s stylus-slanted structure. Though it worked well enough for the most part—displaying unread emails, weather information, and other such sundries—it stood no chance of overcoming the significant handicap that waited beneath it. Three generations of iPhone had already been produced, and people had been conditioned to demand more intuitive navigation.

That’s not to say that it tanked, though. It offered what was at the time an unmatched specification, meaning tech enthusiasts would probably still have purchased it had it been running Windows 3.1, or maybe even DOS. As such, it was fairly popular, and sold very well initially. While it’s tough to find overall sales figures for it, suggesting that the heavy demand waned fairly rapidly, it never really lost its appeal in the way that most handsets do. It had some tricks hidden up its plastic sleeve, you see. Let’s get to them.

Imagine that we have gathered all the HD2 users in a conference room for an informal poll, and asked who still uses the original Windows Mobile OS. There is a smattering of raised hands from crusty business types clinging desperately to horrendously antiquated systems because they understand nothing else, or perhaps can never bring themselves to let go of some obsolete file formats. Everyone else just sits there, eyebrows raised skeptically. Why, they might well be asking, would we still be using that, given the choices available to us?

The question is so ridiculous because the HD2 is seriously versatile. Android was ported to it very early, and the progress never stopped. There are 4.4 ROMs available for it already. Microsoft opted against putting together an update to their vastly improved Windows Phone OS, but it made no difference, the work got done for them in due course (demonstrated here). It will run a version of desktop Ubuntu, and pretty smoothly too. Some intrepid individual even configured Firefox OS for it, if only because they could. The basic WinMo support adds legacy support, which I mock but admittedly has some value. Anyone who feels like dabbling in ROM development can work with an HD2 and be pretty confident that they’ll get somewhere with it eventually.

The Shape of Things to Come

With its 4.3” screen, rugged build and strong complement of detectors, sensors and other such things, the HD2 was ahead of its time when it came to form and design. It still holds up very well, not looking too out of place next to the best and brightest phones we have now. It was always a big lump of carbon, ready to be crushed into a sparkling diamond. Actually, forget that metaphor. It was more like an athletic 6’4 teenager unaware of the existence of any sport other than chess, or maybe golf. It needed to be introduced to a talent scout, put through its paces, and informed of its great destiny, so far beyond that which had been offered by its manufacturer.

The parallels between this phone and Batman in ‘The Dark Knight’ are so spooky, so eerily numerous, that I’d be remiss not to point them out. HTC’s HD2 is the jack-of-all-trades phone the tech community deserves, just not the one most people need right now… so developers will port to it, because it can take it. It’s not the hero it set out to be, but it is an ever-present guardian. Is it being ludicrously hyperbolic to talk of it this way? Yes. It really is. But hell, the HD2 is a great survivor. It deserves a compelling tribute.