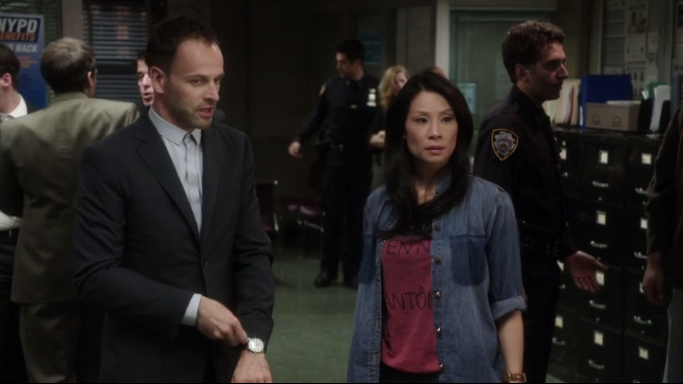 Warning, contains spoilers for previous episodes in seasons one and two.

We open at the precinct as a young man calling himself The Knight walks in to confess a murder to “Lord” Gregson. Apparently he murdered his Queen with a shotgun that he willingly brought to the department. All of the officers reasonably flip out because gun! but Sherlock manages to distract the kid long enough for Bell to tackle him. Good old Bell! If there’s any one in the department you can trust to be on the ball, it’s him. Only, wait; apparently this is a flashback, Sherlock is actually describing a past murder in an administrative hearing for his misconduct on a case where– wait, Bell got shot? Who’s James Dylan? Sherlock could get sacked? Bell got shot?

Couched in the framing device of the hearing, Holmes defends his actions on the case of the murder of Radha Halingsworth, which he says is “inextricably linked” to understanding how Bell came to be shot by James Dylan. It’s a shake-up from the regular procedural-style episode Elementary usually follows, and builds on the tensions between Holmes and the NYPD that began to be explored last episode. The last recap pointed out the several moments of empathy Sherlock truly has been able to show to Joan, Gregson– of special note, Bell– and others throughout the series, and expressed doubt over whether Detective Unprofessional and his lot were more than reasonably upset with Holmes’ bluntness. By changing the structure of this episode and using the testimonies during the trial to shed different perspectives on the murder investigation, and Sherlock’s behavior therein, the show reveals how Sherlock comes across to others outside of Joan, Gregson, and the viewers.

For example, the episode points out how conditioned viewers have become to accept it when Joan and Sherlock use illegal means to obtain evidence. True, they are not part of the NYPD but as consultants they are held to the same level of procedure. Sherlock’s obvious irritation with having his methods questioned grows to the point of flippancy bordering insult. He calls the presiding judge at his hearing not a “real” judge, “technically,” and claims that he had probable cause for entering many of the places of residence he and Joan have broken into, citing “crying puppies” and “a surprising number of open doors.” Furthermore, he corners Joan into lying on the stand in order to support his story. At times it is easy to see Sherlock the way the NYPD must see him– arrogant, patronizing, and unconcerned with the consequences of his (illegal) methods.

And yet there are moments where Sherlock’s empathy shines through. Despite Holmes’ actions in the courtroom, his leading of Joan’s testimony and ultimate assertion that what should matter is the results of his and Watson’s work and not the method of it, it is obvious that he is struggling with guilt. Last episode there was no quarter in his statement that he was “not a nice person.” This week, there is hesitance in the way that he states that the good he does “has to matter– to all of us,” as if one of the people he is trying to reassure is himself.

It was, after all, his methods that led to Bell being shot. If he hadn’t illegally obtained James Dylan’s phone and deduced Dylan’s past criminal record and then loudly used that information to strong-arm him into an interrogation, Dylan wouldn’t have lost his job or been discovered violating his parole. It’s true that that interrogation helped lead them to Radha’s true killer, but it also caused Dylan to attempt to shoot Holmes,and for Bell, a man Holmes respects, to become hospitalized. For the entirety of the episode, Holmes seems to cling to the distinction that it was only his indirect actions that got Bell shot and not his direct ones– he did not pull the trigger. His direct actions only caused the crime to be solved, kept an innocent man out of jail, and put a guilty one behind bars.

It’s clear that might not be enough of a comfort, though. Sure, in the end Joan and Sherlock get to stay on with the department, likely once again because of Bell’s input and loyalty. Nothing has really changed– there are no hard consequences for Sherlock’s actions. The show won’t have to change its procedural structure and, as always, by the episode’s end, status quo is restored. Only not completely; Bell’s complications in recovery may mean he can’t continue to be a detective. Bell may have been able to forgive Holmes professionally, if he truly did recommend to keep Joan and Sherlock with the NYPD, but personally? He makes it clear that he’s unwilling to accept any help from Holmes, and that all is not forgiven.

What do you think about the darker tone of these recent episodes? Might any of this dovetail with Mycroft’s attempts to get Sherlock back to London? How big was your smile when you saw Clyde the turtle’s cameo this episode? Let us know what you think in the comments!