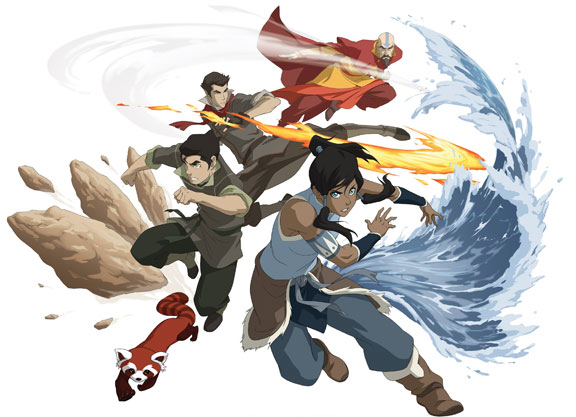 The Legend of Korra is a hard show to love.  Not because the show is bad.  Far from it. Korra is incredibly fun to watch with its fast-paced action, gorgeous animation, engrossing world, and huge cast of fun characters.  Korra is hard to love because it’s so misguided.  You can see the creators going down a path, trying to improve, but the inherent flaws of the show are only getting worse as the show moves into its third book: Change.   The recently released trailer for the third season is full of tiny tidbits and nods to the original series.  It promises the same high-octane action as before.  It even shows intriguing new characters waiting to be explored.  Yet it seems to foreshadow more of the same issues that plagued the first two seasons.  But before I get into the finer details of the trailer, I should explain what I mean by inherent flaws.

Korra suffers from acute sequelitis.  That is to say its problems come from the fact that it was expected to follow one of the greatest cartoons Nickelodeon ever produced.  Avatar: The Last Airbender was a brilliantly paced and executed show.  Its characters all had struggles that made them truly memorable.  Its world was expansive but simple.  Its story used the classic heroes journey to its advantage, creating a cohesive narrative that spanned three seasons.  Korra suffers from trying to copy these strengths without understanding why they were so strong in the first place

First, the characters are all attempted resurrections of the original cast.  Bolin is a prime example as he takes on Sokka’s role as comic relief but loses his intelligence and sarcastic wit.  This leaves him as little more than a catch-phrase machine to shout “Team Avatar!” whenever the brooding leads are feeling down.  Speaking of brooding, Mako is a clear attempt to recreate Zuko without the moral ambiguity.  His tragic childhood makes him grim and humorless like Zuko, but instead of enriching his character with inner turmoil, Mako comes across as having almost no character whatsoever.  Asami is by far the blandest, though.  She is little more than eye candy and had almost nothing to do in book two.

The world of Avatar was also changed greatly in legend of Korra.  In some ways the world felt much smaller.  Each season took place predominantly in one city, losing the grand scope of Aang’s journey.  Additionally, the world was much more complicated.  While the Last Airbender wasn’t afraid to show a bit of political intrigue, Legend of Korra is dominated by it.  Instead of a world of four easy to understand nations, we now have independent city-states of confusing authority with armies to utilize.  While the steampunk style is interesting, Korra’s world falls short in scope and simplicity.

The weakest aspect of Korra as compared to Last Airbender, however, is the pacing of the story.  Aang’s quest was simple: master all the elements and defeat the fire lord before Sozin’s comet arrives.  Korra on the other hand faces a new villain each season who must be introduced, given a backstory, and then defeated.  Additionally the adult characters have their own plots and issues happening simultaneously.  Book two suffered even more as they split up the main characters so that Mako, Bolin, and Asami each had their own individual plots completely separate from Korra’s quest.  There were simply too many plot threads to deal with in fourteen episodes.  It might have even been bearable if characters were able to have their own episodes, but instead a given episode has four plots going at once.  They all interrupt each other so at the end it feels as if no progress was made whatsoever.  To make matters worse, the story is obsessed with the past.  Great chunks of both books are told in flashback.  Which wouldn’t be a problem if the flashbacks developed the characters in the present like they did in the Last Airbender.  In Korra, the flashbacks do little more than provide back-story to the already convoluted plot.  By the end of the season, Korra always feels rushed, compressed, and unfinished.

One would hope that these problems would be fixed as we move into book three.  Unfortunately, the trailer provides little comfort.  On the character front, it seems that a handful of new characters need to be introduced, given back-stories, and developed.  These range from new airbenders, to another waterbending villain, to some sort of combustion girl.  The main characters were also featured very little, suggesting that their development will once again take a backseat to an increasingly convoluted story and expansive supporting cast.  It has long since been announced that Lin Beifong’s back-story will be a focus of this season. And while she is one of the most interesting characters in the show, it can only hurt the main cast to spend another season in flashback.  Fire Lord Zuko also plays a role in this showing the lack of interest in the younger characters.

The world seems to be developing more as well, with huge lotus-shaped cities forming throughout the countryside.  This is the most interesting part of the trailer as it alludes to the lotus society of the original show while expanding it into a global scale.  There also seems to be a great deal more locations in this season, showcasing the depths of Ba Sing Se, the volcanic islands of the Fire Nation, and even an Air Temple or two.  It’s good to know that we will actually get to see the full extent of this new world instead of just bits and pieces.

The story is less comforting.  We left off at the end of book two with Korra leaving open the portals to the spirit world.  Even if she was right to do so, the results of her actions should have very real consequences, as conflict should arise between humans and spirits almost immediately.  The trailer only shows one shot of a spirit, and only a passive whale spirit at that.  So, it’s not likely that the focus of Change will be the changes of introducing spirits back into the human world.  Instead, Change seems to refer to the new benders popping up such as Bumi inexplicably being given airbending.

This does not bode well.  The main characters are still not being developed, the focus of the show is the older characters’ back-stories as told through flashback, and the plot is still a mish-mash of random villains and plotlines loosely tied together.  The Legend of Korra is still beautiful and the trailer exhibits the brilliant animation and design that team avatar is known for.  Just don’t be expecting a lot of substance to go with that surplus of style.