6 Video Game Themed Restaurants That Will Blow Your Mind

There are video arcades, there are amusement parks, and then there are Japanese video game themed restaurants that create a paradise on Earth for gamers.

A Little Elixer Pick Me Up. 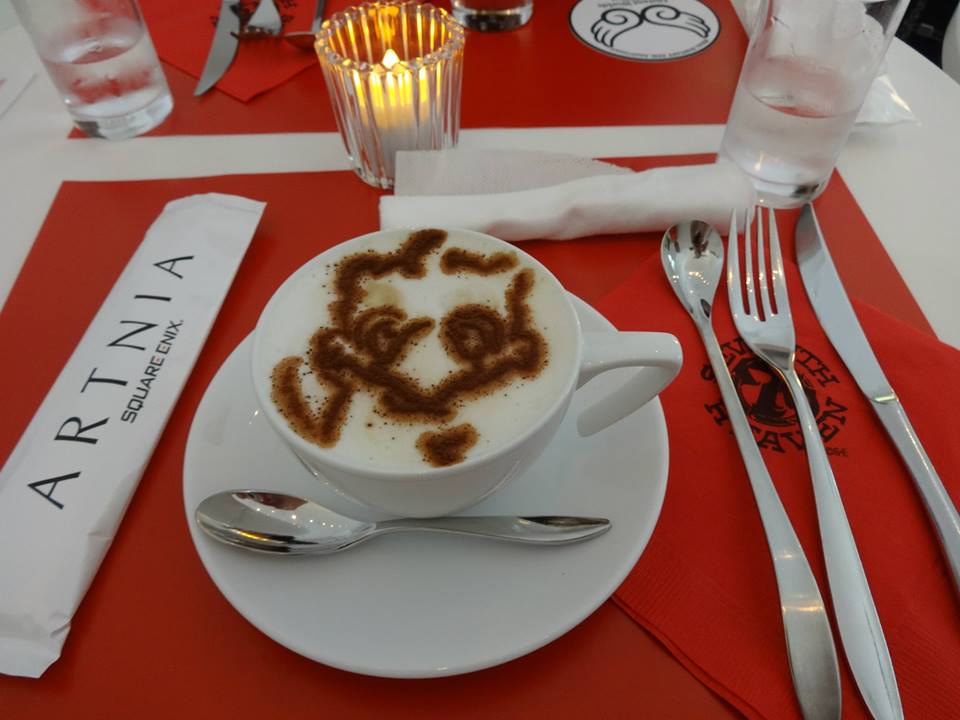 Need a little Final Fantasy in your belly? Then Artnia, the Square Enix café, is the place for you. You can chose from a variety of drinks, like the Shiva and Blue Materia cocktail or a nice hot latte with a Chocobo design in the foam. However, it’s not recommended to go there on an empty stomach since their food options are limited, small, and a little expensive. Most of the basic food items have no theme, though the desserts (parfaits and cakes) do include little garnishes such as mini chocolate buster swords.  However, they have a special in store shop with items that are exclusive to the location, which is worth checking out. 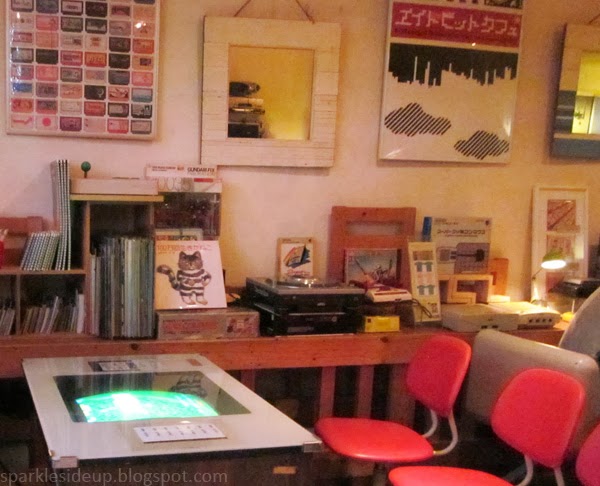 The largest of all the retro gaming bars in Japan, the 8 Bit Café pays homage to all your favorite 80’s games by acting as a giant alter. Not only can you drink specialty game themed cocktails like the Doctor Mario and the Princess Peach Temptation, browse through dozens of old strategy guides, play with all the gaming merchandise on the shelves, but you can also play on one of the many consoles, which include Nintendo Famicoms, Super Famicoms, and Sega Mega Drives. The one down side is that the atmosphere is more of a cafeteria than a bar. 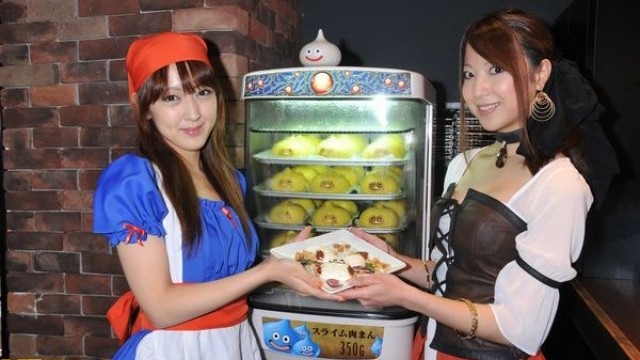 At this themed bar called Luida’s Bar: Dragon Quest, you can expect to see Maya, Erinn, and Luida serving themed drinks and food. Make sure you get a reservation since this bar can only have twenty patrons at a time and visits are restricted to 75 minutes before you’re ushered out a back door. To add to your experience, they only play music from DQIZ Town and Quester’s Rest. Of course, all the drinks are named after items in the game, such as the Yggdrasil Dew, and there are nikuman (Chinese steamed buns filled with meat) shaped like Slimes, or you could satisfy your sweet tooth with a tiramisu Sanguini. 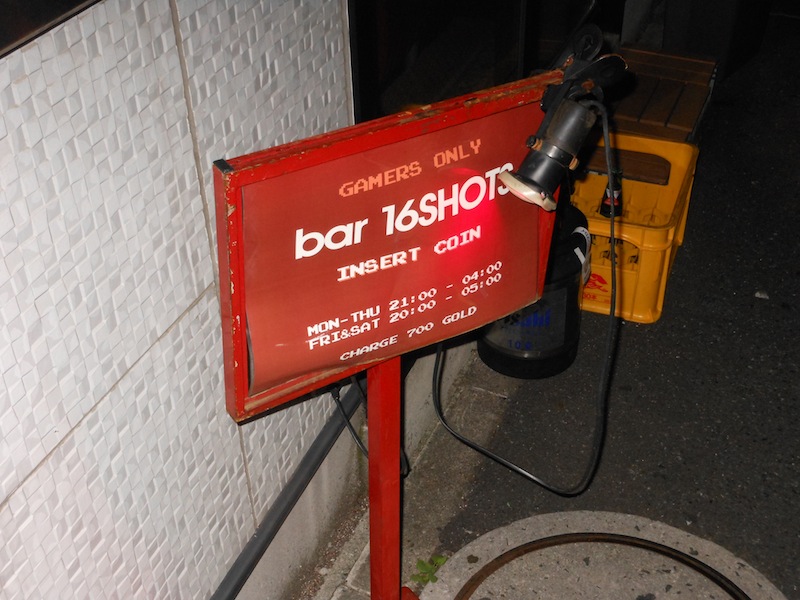 16 Shots is very special but also very tiny. The size of a large closet, it can sit nine people comfortably. But if you can speak Japanese and want the opportunity to meet game designers that have worked for companies such as Square Enix, Capcom, or Namco then this is the place to go. The ambiance is supplemented with video game theme remixes and a large projector displaying game videos on the wall. Occasionally, the projector is set up so you can play games on it as well. However, on nights when this isn’t happening, there are always the “cocktail machines”, tables that have a arcade machine built in so you can play while you drink.

Tyrants, Nemeses, and Zombies, oh my! 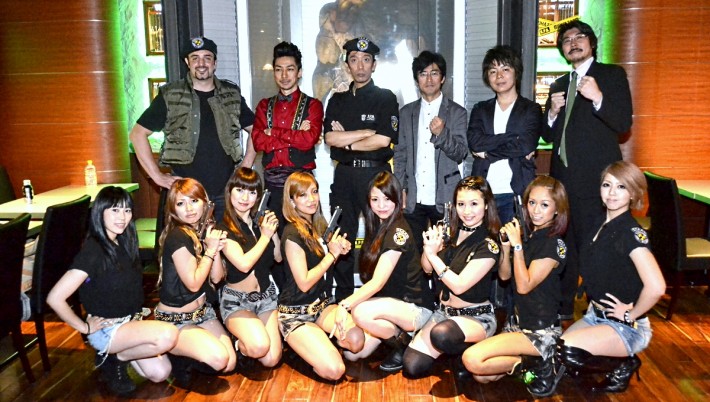 Located in the busy Shibuya district of Tokyo, there is a little restaurant tucked away where the members of S.T.A.R.S are there to take your order and protect you from any zombies that should appear. This is the Resident Evil restaurant, or as it’s known in Japan; the Biohazard Café and Grill. The café was only expected to last a year but became so popular that they moved to the permanent location in Shibuya. The menu includes themed items such as the Revelation’s Eye entrée, a Jill Valentine cocktail, Tyrant rib steak, and a Green Herb salad. Of course, all this comes with a show you won’t forget! Dancing, singing, and a biohazard outbreak. 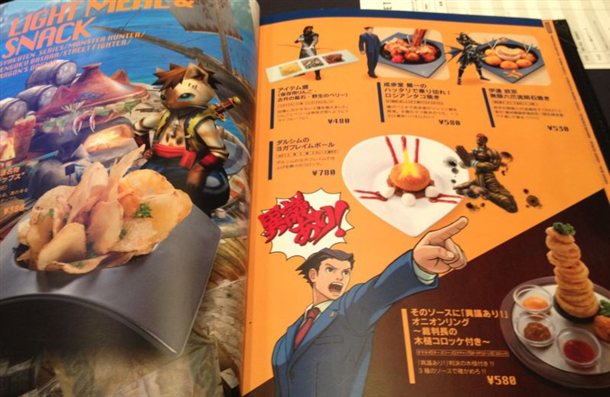 If you’re looking for all your favorite Megaman, Monster Hunter, Phoenix Wright, and Devil May Cry games rolled into one fantastic location, the Capcom restaurant in Shinjuku is the place to go. With large screen TVs, merchandise, gaming kiosks, and specialty events, this is the place to go to experience surround sound gaming heaven. Its permanent menu features dozens of themed food and drink. If you’re a Phoenix Wright fan, there’s an onion ring tower made to look like a judge’s gavel or if you’re brave, there’s the Russian Roulette takoyaki set designed to look like Wright’s hair. Careful though, one packs a serious habanero punch. For Monster Hunters, there are dragon blood cocktails to go with your “Well Done Steak”. For newly released games, the Capcom restaurant throws special events where you can win merchandise as well as try limited edition food made just for the occasion. One thing that helps this restaurant stand out from the rest is the value for money. While other themed restaurant rely on gimmicks, here the food is reasonably priced and more importantly, very delicious!