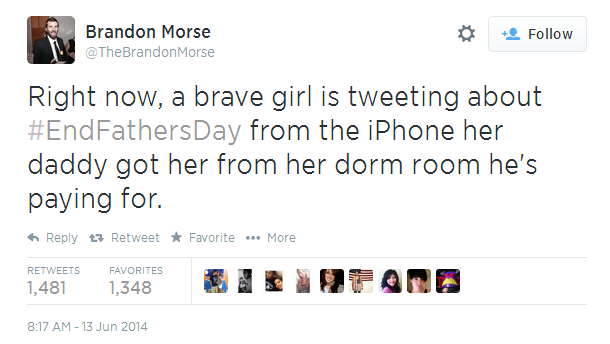 Another hashtag hoax overtook Twitter this morning, shooting up the trending tags list and sparking mass digital outrage. Initial tweets containing the hashtag called for an end to Father’s Day with claims that the holiday promoted patriarchy and rape culture. The twitter account @TashaPolwright, which has since been deleted, appears to be Patient Zero. The #EndFathersDay hashtag has been widely recognized as another 4CHan creation, unsurprising from their history of other Twitter hashtag hoaxes like #BaldForBieber and the appalling #CutForBieber which both rapidly went viral. Luckily, it seems the teen girls 4Chan was targeting in their Bieber hoaxes didn’t fall for them, or at least not so completely that they shaved their own heads or hurt themselves. Others believed the more gruesome of the two to be genuine for a time, but the truth was quickly discovered and Twitter easily believed it had been a ruse. However, in the case of #EndFathersDay, Twitter is proving extremely reluctant to acknowledge the hashtag as fake, continuing to express outrage even as more and more tweets and blog posts join the fray explaining that it’s neither genuine nor supported by actual feminists. Antifeminists and Men’s Right’s Activists (or MRAs) over at pickup-artist-inspired forum Roosh V are rejoicing the hashtag, both for its ability to fool so many people and it’s damage to feminism’s credibility in an age that seems eager to discredit the movement. Indeed, Twitter users who were already misguided on feminism drank up the hashtag and eagerly used it as supposed proof of feminist extremism:

Feminists starting #EndFathersDay imagine the backlash of #EndMothersDay like jesus go by another flannel and watch another Jane Lynch show. — Sam (@Sam_Wasson44) June 13, 2014

The revelation that #EndFathersDay was a hoax doesn’t seem to have stopped people from believing it to be genuine to some capacity, perpetuating the notion that feminism is a fad full of fanatics. 4Chan, unfortunately, seems to have accomplished its goal.