The new trailer released for Kingdom Hearts III contained two words fans of the series have been waiting for: “Coming 2018.” It’s been 12 long years since the release of the second game, and it’s nice to know we’ve got about a year, give or take, until we finally get the next installment. That’s assuming there’s no delay, of course.

The trailer also reveals a Toy Story world that will appear in the game alongside the ones featuring Tangled and Big Hero 6. There are lots of good clips of fighting gameplay, and you’ll notice that Buzz and Woody are fighting alongside Donald and Goofy rather than replacing them. This already beats out the maximum of three characters allowed in the previous games and will certainly come in handy for keeping a well-rounded team. As a bonus, it’s kind of interesting to hear Buzz and Woody voiced in Japanese. 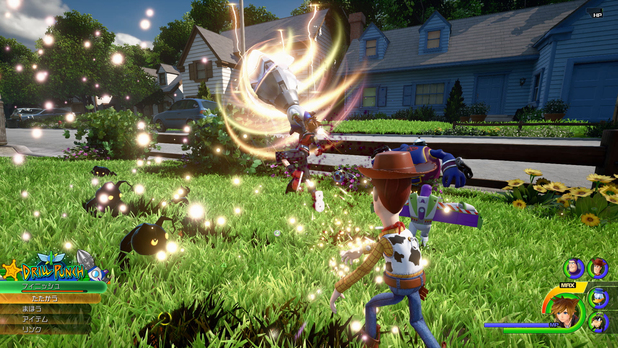 The returning Mount Olympus is the only other world known at this time that will be in Kingdom Hearts III, but Game Informer did get some good information on what else can be expected. In an interview with video game director Tetsuya Nomura, it is suggested that there will be fewer worlds than in previous Kingdom Hearts installments, but they will be more elaborate. Nomura had this to say:

“Rather than having multiple different little worlds, we wanted to make sure we’re providing rich gameplay in an individual world, so we put in a lot of effort and allocated a lot of resources to create these worlds…”

Kingdom Hearts III will be released on the Xbox One as well as the PlayStation 4. Fingers crossed it will happen in 2018. The Kingdom Hearts games that have been tiding us over since the release of the second games have been great, but I think we’re all ready to see that “III” in the title…

Check out the trailer below if you haven’t seen it.