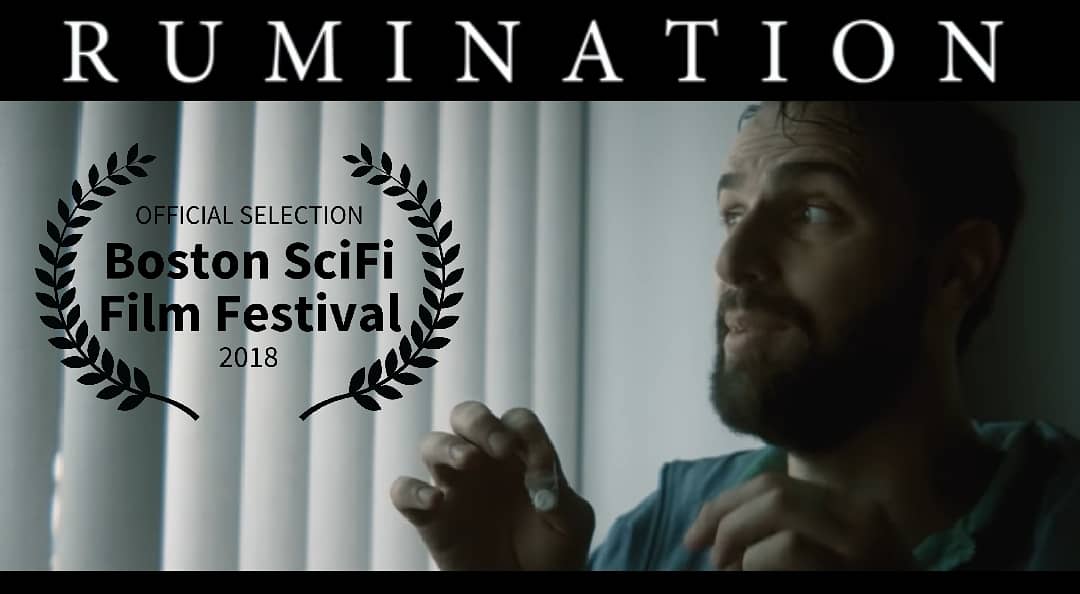 Boston’s Sci-Fi Film Festival is just around the corner. This year audiences will have the chance to see an upcoming and award-winning film by DC filmmaker Chad Eric Smith.

Chad Eric Smith’s short film, Rumination is one of many films that will be shown to audiences at 2018’s Boston Sci-Fi Film Festival. The film just won the Rosebud Film Festival’s “Best DMV Film” award and has started gaining recognition in the DC area and beyond. I had a chance to chat with the filmmaker who is also an award-winning actor, musician and activist, Mr. Smith’s latest film is his third to date and is currently drawing praise as it hits film festival screens nationwide.

Rumination is a short tale that follows the efforts of a young man who is attempting to mend a broken relationship by any means necessary. The film follows Elliott, a man desperate and grieving when he meets a neuroscientist who has developed a drug that enables time travel. The film then details Elliott’s plight as he tries to use the drug to go back in time to keep from losing his relationship.

The film’s three actors, Angus Whinfield, Kelvin Drama, and Danny Gavigan portray their characters well. Gavigan stands out as the neuroscientist who has developed the top-secret drug, and could easily pass for the guy in college who studied chemistry just so that he could make his own batch of LSD. Whinfield and Drama are convincing in their roles as lovers. Drama’s delivery of the lovesick emotion and desire is certain to resonate with anyone who wishes he or she hadn’t said the things they said and did the things they did that caused them to lose the affection of their former lover.

The production quality of Rumination’s is top-notch, so it is no wonder that the film has just won a Rosebud Film Festival award and it’s likely that more accolades are to follow. Smith had a few things to say about the message and theme delivered in his film, “As a director, I was influenced by the look and feel of the series Black Mirror and the Christopher Nolan movies like Inception.” Smith says he gained that type of feel by using natural lighting and a musical score created by his father who was the film’s composer and who used isochronic tones and binaural beats that are characteristic of meditation music. Smith said that since he was “telling a story that involved the topic of consciousness (he) thought it would be cool to have a score that included subtle auditory illusions” and also that he “wanted to subtly play with the audience’s eyes, ears and everything in between” in order for viewers to be brought into Elliot’s world. The slow R&B type rhythms do just that in the film’s earlier scenes before Elliott attempts to regain his lover’s affection.

Smith says that the script is partially inspired by a personal experience and the grief he endured after a break up. The director hopes that audiences will be both entertained and inspired by his latest film which he says was “a constructive example of how one can cathartically turn pain into art.” Smith says the filmmaking process has allowed him to heal his own wounds by exposing them and creating art that entertains audiences and resonates with others who have had similar experiences.

Rumination will screen at the Boston Sci-Fi Film Festival on February 10 in Boston’s Somerville Theatre.
The full lineup and schedule will be posted on the festival’s website as opening day nears. The Boston Film Festival is the oldest genre fest in the country and consists of features, shorts, webisodes, workshops, parties and films, some of which are Hollywood productions. Ticket options include a festival pass which allows festival goers access to all events (with minor exceptions) and marathon tickets which includes two days of non-stop movie watching on February 18th and 19th. Individual movie tickets will also be available.

How Wrong Are We About the Gaming Gender Divide?

Fan Fiction: The Madness That Binds Us — Chapter Four