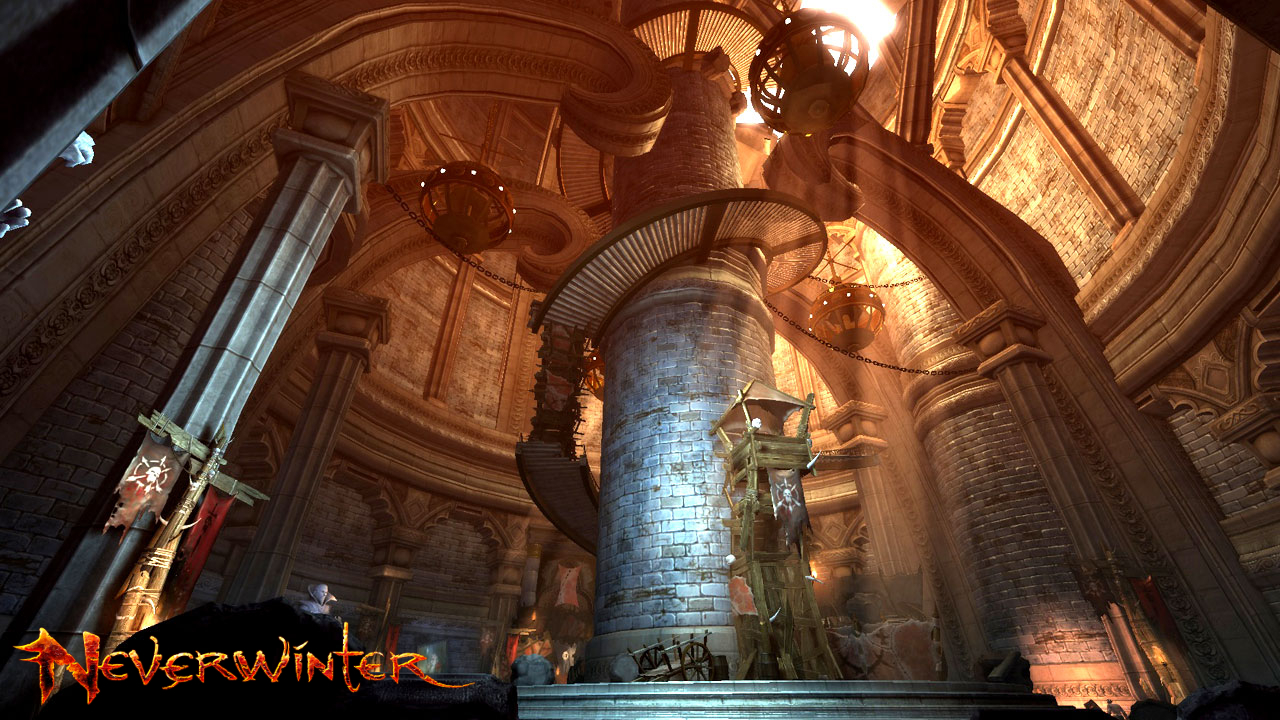 The experience of playing Dungeons & Dragons is a unique one, in no small part due to the sheer volume of fictional history, culture, and lore its players can access. While the game is designed to let each group of players invent their own story, some official settings still fill gamers with awe and inspiration: Baldur’s Gate, Waterdeep and, of course, Neverwinter. Inspired by this lore, Cryptic Games released their MMORPG Neverwinter in 2013, hoping to bring fans of D&D a new way to enjoy classic worlds and characters. Geek Insider sat down with the game’s Senior Content Designer, Randy Moziondz, to discuss building the story of Neverwinter and the game’s current and future collaborations with Wizard of the Coast. 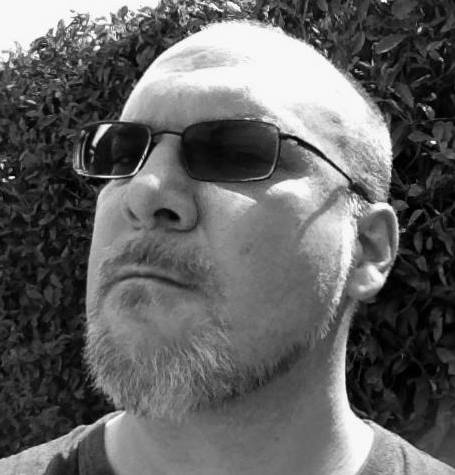 GI:  Thank you so much for your time and the opportunity to speak with you about your work as senior content designer on Neverwinter.

Randy: Happy to take the time to do so!

GI: So, let’s dive in. In what ways do Neverwinter’s “Tyranny of Dragons” and upcoming “Rise of Tiamat” campaigns interact with or build upon their pen-and-paper counterparts? Are they purely parallel or do they share characters, events, or other elements?

Randy:  To give you a bit more background of development, “Tyranny of Dragons”, like other upcoming D&D storylines, work with a background story bible that outlines certain large scale, world-affecting events. From those major plot points come a number of adventure seeds that result in pen-and-paper modules, D&D Adventurer’s League events, and our modules and events online in Neverwinter. This creates a wide variety of stories that can be told in the campaign setting. Personally, I’m running a D&D 5e Tyranny of Dragons tabletop campaign for my content team every week at work, playing in some Tyranny of Dragons adventures set in the Phlan area of the Realms in the local D&D Adventurer’s League, and helping build the upcoming module to culminate the Tyranny of Dragons storyline for Neverwinter. It’s a great time to be a D&D Realms fan!

In terms of shared and parallel content, we’ve got a mix of cross-over and distinct elements between the pen-and-paper and online versions of “Tyranny of Dragons”.  For example, some the key characters such as Severin of the Cult of the Dragon and Rath Modar of the Red Wizards of Thay who show up and play important roles in both versions. Likewise, there are background stories alluded to in both the tabletop and online versions, some of which culminate in certain special events that you only see in the online game.  For example, we recently had the “Siege of Neverwinter” event in Neverwinter where dragons attack the city in force and adventurers must help drive them back.

GI: As part of the current Wizards of the Coast Adventurer’s League storyline, “Tyranny of Dragons” offers players a chance to bring their tabletop experience into Neverwinter by earning equipment and other boons (such as the rare Tear of Bahamut potion) during tabletop play, which they are able to use with their Neverwinter In what other ways are Perfect World and Wizards of the Coast working together to encourage crossover between the Dungeons & Dragons tabletop experience and the experience of Neverwinter?

Randy: The “Tear or Bahamut” promotion was very popular, and we are definitely planning to do more of these in the future. We’re still discussing other possible promotions between the tabletop and online games, but nothing that we can reveal yet.

Randy: Right from the start, our discussions with Wizards of the Coast were about developing a good D&D experience set in the Forgotten Realms. This doesn’t mean a direct translation of the D&D rules, but a fun online multiplayer game experience that embraced the lore of the Realms. We ended up with an action-MMORPG style of gameplay which is really fun and engaging, but doesn’t necessarily lend itself to a narrative-heavy style. At one point we actually had more conversation trees and decision branches, but we found that was at odds with the action gameplay and social interaction of the multiplayer environment.

That being said, I think we did a good job of delivering the lore to the player base. We kept the quest text short and distinct, and pushed off a lot of the deeper lore to side conversation trees and lore triggers and objects found in the world as you explored. By simply wandering around the world, you can passively collect many pieces of lore that have short write-ups on fly-ups, and deeper lore that goes into your player journal for later reading. The more you adventure through the Realms, the more lore you accumulate. Even if you don’t read much quest text, we have a lot of supporting audio and ambient encounters that reinforce the story of the adventuring area and the Realms itself. 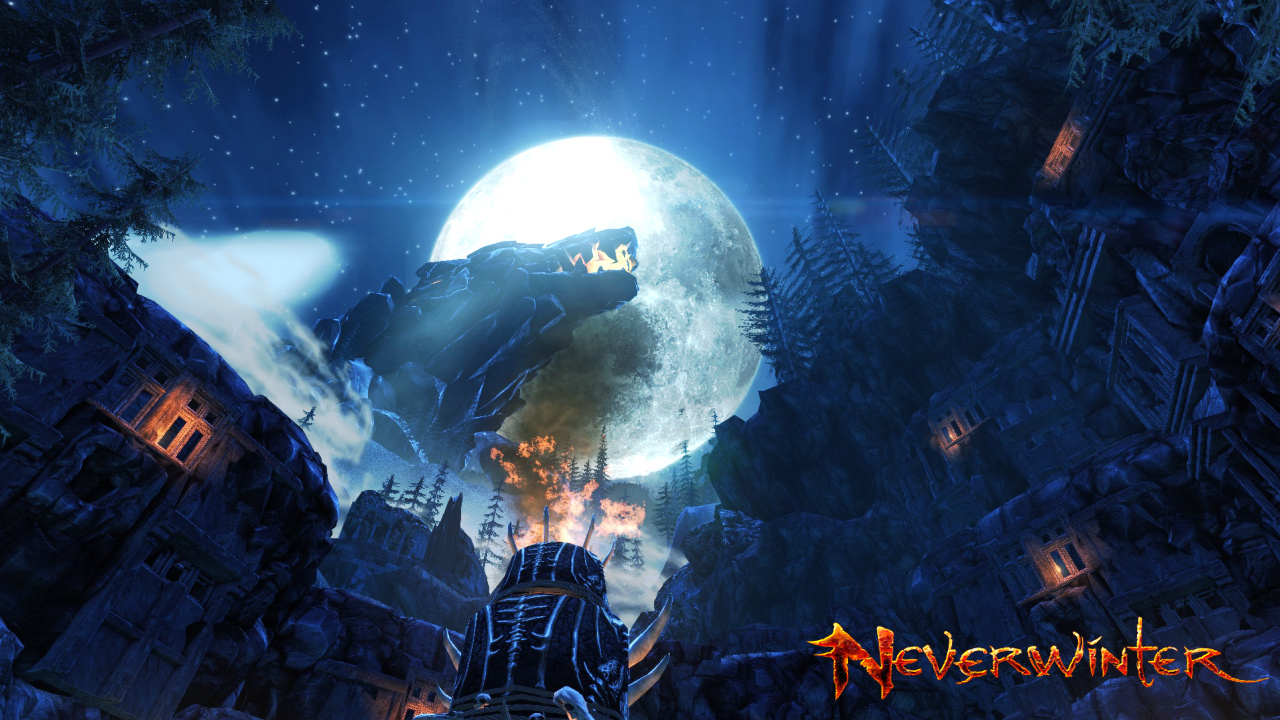 GI: Neverwinter is built not only on the wide and voluminous lore of the Forgotten Realms campaigns and books, but also on the legacy of its predecessor MMO, Neverwinter Nights. Do you feel the game holds its own against the expectations such a well-loved game has left behind?

Randy: It’s difficult to draw a direct comparison between the two, simply because the styles of the game differ so much. Neverwinter Nights is tailored for a single-player game experience with a deeper narrative and tactical turn-based combat, while in Neverwinter you’ve got a massive multiplayer world with action combat. I remember playing and enjoying Neverwinter Nights back in the day, but I think Neverwinter holds its own on delivering an expansive, immersive, and memorable world set in the Realms. We put more focus on accessibility for an action multiplayer environment, but there’s still plenty of Realms lore to draw from and enjoy.

GI: What makes the story and setting of Neverwinter stand out against the other stories and settings of the Forgotten Realms?

Randy: While Neverwinter Nights introduced the city of Neverwinter, in the last few years it has become the center point of many key events in the Realms. One of the major pen-and-paper releases for D&D 4e Forgotten Realms was the Neverwinter Campaign Setting.  We drew a lot of inspiration for Neverwinter from that book, building many adventure zones based on the material presented there. The stories there were fairly epic: the lich Valindra (as the right hand of Szass Tam of Thay) lairing in the ruins of Castle Never, the Many-Arrows Tribe of orcs trying to claim part of the city for themselves, the roiling pit of Spellplague energy in the Chasm area of the city, the search for lost Gauntlgrym – it all combines together into a very rich tapestry for players to explore. It’s a great setting to work with, and we’ve got plenty of ideas to draw upon for years to come.

GI: How familiar with the (incredibly vast) lore surrounding Faerûn and the Sword Coast were you when you began designing Neverwinter?

Randy: I am a long-time D&D fan, having gotten the original red box in the 80’s. I remember eyeing the original Forgotten Realms Campaign Setting boxed set at the local game store, and eventually reading The Crystal Shard, one of the first books to include the now-famous Drizzt Do’Urden. I didn’t get around to actually playing and running Forgotten Realms campaigns until 3rd edition came out in 2000, but I’ve been a fan of the lore and setting since. 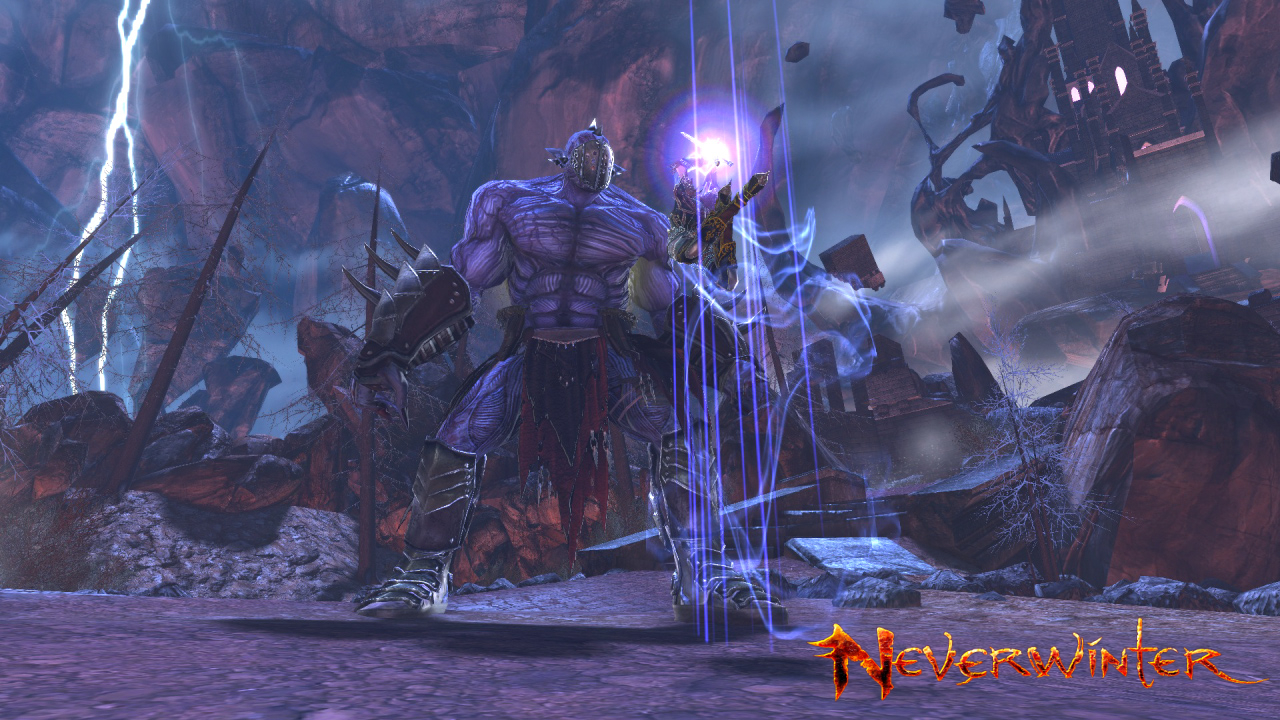 GI: How accessible do you feel Neverwinter is to players who may be familiar with typical MMOs but not the Forgotten Realms or D&D? What are ways the game might immerse these players into the lore and history of Neverwinter?

Randy: Neverwinter is extremely accessible to new players. One of the things we were careful to do is not have the players require a lot of pre-knowledge of the world to get immersed in the setting.  Storylines are self-contained to adventure zones and story arcs, so players aren’t overwhelmed.  As mentioned before, passively exploring the game will earn new players lore collectibles they can review in their player journal, so they don’t have to spend a lot of time reading through a lot of dense text just so they can start enjoying the game. There’s some depth to the lore, but we don’t force it on players – they can dip their toe in the lore pond at their leisure!

GI: What part of Neverwinter’s story has been your favorite part to work on so far?

Randy: I’ve been really enjoying the “Tyranny of Dragons” development recently. It’s an epic storyline about the rise of one of the most iconic evils in D&D history, and a heroic last-ditch effort to stop it from happening. If you’re any kind of D&D fan, how can you not totally geek out about the coolness of that storyline?

GI: Without giving too much away, what are some things players should look forward to for the upcoming “Rise of Tiamat” campaign?

Randy: This is going to be challenge to players unlike anything they’ve experienced before in Neverwinter. It’s going to take multiple teams of players to face this threat, so players had best start preparing now!

GI:  Is there anything else you’d like to tell current or potential Neverwinter players as the senior game designer?

Randy: There are many people on the team who are long-time fans of Dungeons & Dragons and the Forgotten Realms. Working on Neverwinter is a labor of love for us, and we hope to bring you a heroic experience for your adventurers. Come explore the Realms with us and let us know what you think!

Are you a long-time Dungeons & Dragons fan, or a newcomer to RPGs? Do you prefer tabletop or MMO games? Let us know what you think about Neverwinter and its upcoming campaigns in the comments!

The Harry Potter Video Game Series: The Good, The Bad and The Irritating