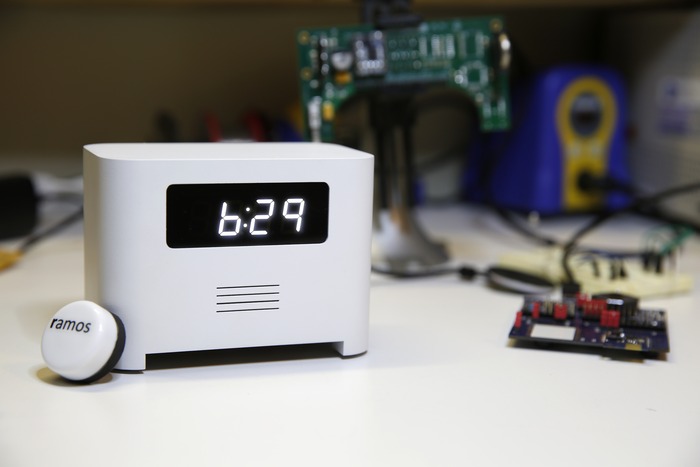 Enter Ramos, an alarm clock that you literally cannot sleep through. With many exciting new features, Ramos gives 21st century life to a traditional household product.

Ramos’ calling card is its ability to make its owner wake up when their alarm says so. Everyone has struggled with alarm clock failures; you forget to set your phone alarm, snooze too many times, or simply turn off the alarm all together. Next thing you know, you’re getting another nasty email form your boss about your punctuality. With Ramos, there are several features to prevent this all too common mishap:

Ramos connects to your internet and comes with a wireless beacon that is the key to turning your alarm off. You can set this beacon anywhere; your bathroom sink, your coffee machine, next to your milk and cereal, etc. Ramos will not stop its alarm until you reach the beacon and perform a task. This can be as simple as touching your phone to the beacon, doing jumping jacks, or typing in a code. Sure, it seems like a lot of work, but you will most definitely wake up if your beacon is placed in just the right spot.

But What If I Turn the Alarm Off Before It Sounds?

The answer is simple: Without beacon deactivation you cannot. Ramos has a lock-down mode in which it will not let you turn off the alarm before it sounds. Don’t even try to unplug it- reserve battery power keeps Ramos up and running and ready to wake you up. Ramos also includes features such as gradual pre-alarm and day and night dimming. The gradual pre-alarm begins to make soft noises a few minutes prior to waking up instead of erupting in noise at the desired time like a traditional alarm clock. The dimming features can set Ramos to dim the lights at night, or gradually brighten them as you wake up, simulating a morning sunrise. All of these features are designed to give you a more natural awakening while maintaining your sleep schedule.

But I Hate the Sound of an Alarm!

So you you don’t like loud  beeping and whining? Well, most people don’t. Ramos allows you to set your own alarm tones. Whether you want to immediately get hyped with some dubstep, or prefer more docile classical music, Ramos meets your needs. No more screeching, beeping, or bumping from your old phone or alarm clock.

The purpose of Ramos is to wake you up on time so you can create a healthy sleep schedule, but the cherry on top is are the extra features. You can connect your Ramos to several gadgets in your household. For instance, you can have Ramos begin brewing your much needed cup of coffee before you even wake up. Just like any phone, the time of the clock never needs to be set. Ramos regulates its own time the way a smartphone would. Ramos can even connect to your thermostat to warm or cool your room as you wake up. It also comes in a sleek black, or traditional white.

For some readers, Ramos might sound like a sleep nazi. How dare this little piece of machinery get in the way of your slumber? However for others, Ramos might seem like the product of their dreams. You can finally get out of bed when you have to! The value of Ramos is up to you, the potential owner. Ramos will retail at $130 and plans to begin shipments in May of 2015.