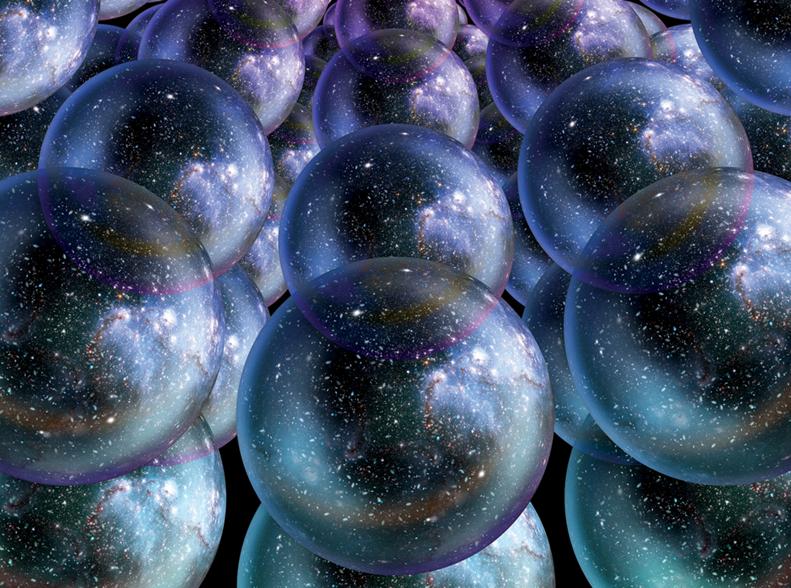 “Before there was thought, there was this place. One Earth. With a single history. But with the coming of man, came the illusion of free will. And with that illusion, came chaos. With every choice we make, we literally create a world. History branches in two, creating one Earth where we made the choice, and a second where we didn’t. That’s the secret of the universe, you know. Billions of people, making billions of choices, creating infinite Earths. Some so similar to each other that you could spend a lifetime searching for any difference. Others so radically different, they defy comprehension.”
— Owlman, Justice League: Crisis on Two Earths

Most of us are familiar with the concept of the multiverse (even if we don’t use the name itself): The idea that there are multiple–perhaps even an infinite–universes, each either slightly or completely different to the more familiar setting of the work. It’s a concept that is becoming more popular in the sciences (usually called the “Many Worlds Hypothesis”), but in fiction it has existed even longer and been used to tell interesting stories. In this article we’ll examine some of the more prominent uses of the concept in sci-fi and fantasy in several different mediums: comics, TV, movies, and books.

The Multiverse in Comics

In comics we find one of the best visual representations of the multiverse and the potential the concept holds. Different versions of the same hero can both exist in their respective universes and meet one another. The first prominent use of the concept was in “The Flash of Two Worlds” (The Flash #123), written by Gardner Fox and Carmine Infantino. In the real-world (or Earth-Prime, if you prefer), the Silver Age of Comics had reintroduced familiar characters like the Flash and Green Lantern (certain characters like Superman and Batman were unchanged) had been reintroduced as new characters–Hal Jordan replaced Alan Scott as Green Lantern, Barry Allen replacing Jay Garrick as the Flash–with new origins. In Barry Allen’s case, it was established that the Jay Garrick Flash was merely a comic book character, one who inspired him to take the identity of when he gained super-speed powers himself (incidentally, this makes Allen something of an ascended fanboy–it would be like one of us gaining powers and adopting the identity of our favorite hero).

Besides this mention, there was no hint of what had happened to Jay Garrick until this story, where Barry Allen was transported to a world where Jay Garrick, and not himself, was the only Flash. Since Allen had read the comics, he knew who Garrick was and the two met–Allen’s Earth being established as “Earth-One” and Garrick’s world being established as “Earth-Two.” The two had a team-up together and it was thus established that most of the Golden Age heroes (such as the Justice Society of America) existed on Earth-Two while their JLA counterparts existed on Earth-One. From this humble story, the DC Multiverse was established and future stories (from DC, Marvel, and beyond) were inspired by it. The idea of a fictional character meeting an in-story fictional character is an idea ahead of its time, and predates the concept of Fictional Realism (the idea that in a truly infinite multiverse, every story created would have to exist somewhere by pure probability), an idea that has long fascinated me.

DC had many “Crisis” events based on their multiverse, while Marvel took a somewhat different approach, such as their JLA expies “The Squadron Supreme,” as well as numerous “What If?” and alternate history stories. But much of it was inspired by this story.

Television Has Also Proven Fertile for the Concept

From shows like Sliders (whose very premise was based on the concept), to the various Star Trek series, to even cult shows like Lexx (with its Dark and Light Zones). Fan favorite shows like Doctor Who have explored the concept, introducing versions of the Cybermen (ones created on a parallel Earth rather than on an alien planet) in “Rise of the Cybermen”/”The Age of Steel.” Television sows usually have alternate versions of the main cast meeting up with their mainstream counterparts, the most famous of which likely being the alternate Enterprise crew in the TOS episode “Mirror, Mirror,” featuring a much parodied bearded version of Spock.

Movies Are Lagging Behind a Bit…

Movies have not yet embraced the idea of the multiverse like other mediums. But there are exceptions to this. The most recent and high-profile example would be J.J. Abrams reboot movie of Star Trek. In it, the actions of Nero from the “prime” Star Trek timeline create an alternate timeline where the new movies take place. Does this mean the original timeline was overwritten? Although normally this would be the case, the answer, from other canonical sources, seems to be “no,” with both timelines existing separately from each other.

Another popular example would be Donnie Darko, where an alternate timeline is created and about to end, with the title character getting guidance from a man in a giant bunny costume (you need to watch it to get this). The film delves into popular science on the topic (Hawking’s A Brief History of Time is shown) and is probably the most in-depth the concept of multiple universes (in this case, alternate timelines and time travel) has been explored in film.

So Many Books Featuring Multiple Universes

Where to start? The Chronicles of Narnia. His Dark Materials. The Wizard of Oz. The Number of the Beast. Rant. There are so many books featuring the multiverse and alternate timelines that it would be hard to list them all. Given the nature of the medium this is unsurprising, as it does not require artists, animation, actors, or special effects to write a novel, allowing writers to create any idea or world they can conceive of. Alternate Earths abound in fiction, and since books don’t have to constantly catch the reader’s attention, they can provide far more details about these worlds and the nature of the multiverse which other mediums just can’t compete with. Based on this, I see books as the medium where the most can be done with the multiverse.