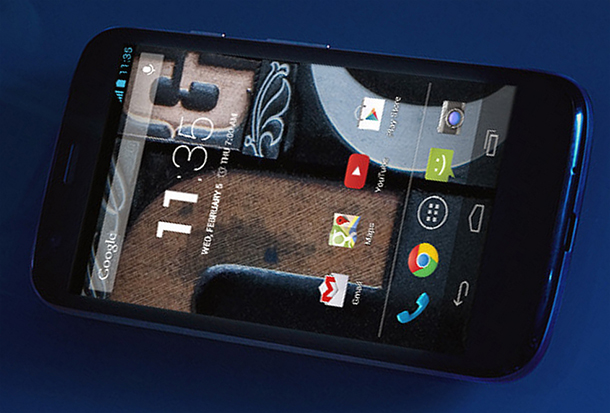 There will soon be a strong new contender in the budget phone marketplace in the form of Motorola’s Moto G, set to cost only $179 off contract. Armed with a hugely impressive set of attributes at such a low price point, it sounds extremely appealing. Let’s size it up and imagine how it might fit into a field rife with formulaic Android options.

When the first iPhone brought the modern smartphone into prominence, it did so with limited ability but an even level of smoothness and usability that many of the vastly more advanced handsets since have oddly failed to provide. Look at the front-end software stapled on top of Android by manufacturers determined to stand out in some way, most notably HTC’s Sense and Samsung’s TouchWiz. Most of the tweaking and tampering has served to obfuscate the basic functions; to complicate rather than simplify. Phones now can do so much more than most people would have imagined even five years ago, yet the typical user’s needs, while now different (and certainly more diverse), have not become much more complex. The average person just wants their phone to work usefully and consistently and do the regular tasks they see as fundamental.

To consider a relevant scenario, it is easy to feel like the general operating system format available now on PCs and Macs alike (to a fashion, at least) has been around forever, but of course it hasn’t. There used to be plenty of everyday things that worked slowly and confusingly or not at all. Once most of the core issues got resolved and things seemed stable, many users stayed where they were despite the industry moving on. Windows XP might not be glamorous but it still performs perfectly adequately for those who stuck with it.

Keeping this stabilized list of requirements in mind, then, we may now assess the Moto G. In many respects it is very similar to the Nexus 4 (though with half the RAM at 1GB and a rear camera of 5MP). This resemblance means it has a lot going for it. If offers a 4.5” screen with a decent level of pixel density that will look more than adequate to the casual viewer, and a quad-core processor clocked at 1.2Ghz that shouldn’t break a sweat handling anything other than games; even then, it should cope acceptably, at least in the short term. 8GB of storage for the cheapest version is plenty for assorted photos and the occasional music file, and it is guaranteed an update to Android 4.4, although it is not as if 4.3 particularly lacks anything anyway.

There are some things we have no way of knowing, of course, and chief among them is how tough the body will be. If any corners have been cut in its construction, that’s where they will become significant. Only time will tell, but we won’t have to wait too long to find out; it’s listed as being released in the US in early January.

I’m struggling to see anything about the Moto G that is likely to discourage any potential buyers. It stands to reason that it will function well with YouTube or Gmail or Maps or any other core apps indefinitely, so there’s no worry that it will become left behind in that regard in the near future. If the screen is bright and colorful, it will not be made less usable by the advancement of the technology in other displays. While it does not have an LTE radio, it will get transfer speeds more than fast enough for fairly heavy internet browsing or even tethering.

Weighing up the overall package offered by the Moto G, it seems like an obvious choice. It doesn’t offer anything new, and there are many phones that outstrip it hugely, but I challenge any prospective first-time smartphone owner to ruminate upon the options and find a point in spending any more than the Moto G would cost them. After all, a $600 phone wouldn’t make the process of sending a text message any quicker, or websites function any better, or Facebook updates any easier. They could go the other way and spend less, of course, but to do so would invoke a substantial decrease in performance as well as a return to sluggish UI replacements. By spending a little extra, they get a lot more, as well as a near-stock Android experience.

Overall, the Moto G sets a new precedent when it comes to budget phones, and all the other manufacturers may find themselves scrambling to catch up with similar offerings. Motorola should benefit from this (and, by extension, their owners at Google), but the real winner is the consumer.