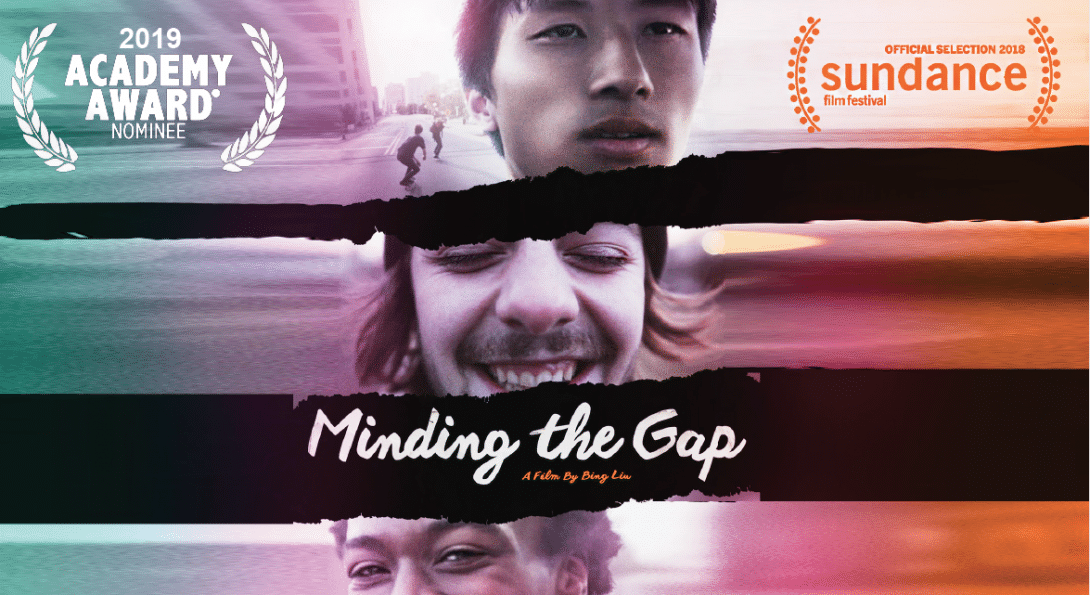 Directed by Bing Liu, and a nominee at this year’s Academy Awards for Best Documentary Feature, Minding the Gap is a film that documents the tumultuous coming of age of three young men from Rockford, Illinois: Keire Johnson, Zack Mulligan, and Bing Liu himself – all three of them skateboarders. It is Liu’s first feature film and it premiered in January of 2018 at the Sundance Film Festival, which awarded it with its U.S. Documentary Special Jury Award for Breakthrough Filmmaking. Hulu then acquired the rights to the film, and released it as a Hulu Documentary and in limited theaters last summer. Last month it aired on PBS as part of its POV series. PBS has also made it available for streaming on its website.

As a skateboarder himself, Liu had been filming the skateboarding community in Rockford, Illinois, since he was a teenager. His film uses footage that he compiled over a span of 12 years. Having had his start as an amateur videographer, he eventually made his way into the industry, working as a camera assistant for TV shows that were shot in Chicago. But then, in part driven by a need to find his own voice as a filmmaker, and set himself apart from other videographers, like Spike Jonze, who visually documented the acrobatic prowess of BMX riders and skateboarders, Liu began to look for ways to portray the skateboarding community from an angle that nobody had looked at it from before.

Liu himself carried with him a traumatic past, stemming from a dysfunctional upbringing, and skateboarding had been extremely important in helping him get through those years, providing him with a sanctuary of sorts, and a de facto family. In addition to that, he had noticed that same pattern emerging repeatedly in the skateboarding community: kids escaping volatile environments at home and seeking refuge in that environment of camaraderie and acceptance through self-expression, proof of competence, and competitive mastery.

The need to explore these themes of family dysfunction, violence within the family, and the wobbly transition of kids coming from those environments into manhood, led him to go around the country interviewing skateboarders. On a Meet The Artist video uploaded on the Sundance website, Liu states: “One time I was at a skate park in St Louis, and we were, like, sitting around in a circle and, after skating, we’re just talking, hanging out, and one person brought up the fact that it was father’s day, and, you know, we’re like ‘we’re all here, and it’s father’s day, what’s the deal?’ And everybody just starting talking shit about their dads, or their lack of fathers, you know. I think that was the first, I guess, like, a-ha moment.”

But it was when Liu met Keire Johnson, a skater kid from his own hometown of Rockford but seven years his junior, that Minding the Gap started to take shape. Keire was seventeen at the time, and incredibly open on camera about his story of abuse at the hands of his own father. Liu saw himself in Keire, but he also saw in Keire a teenager who still hadn’t processed things yet, but was willing to do the work to try to make sense of it all, instead of brushing things off and dwell in anger and resentment.

Shortly after meeting Keire, Liu finds out that Zack Mulligan, an old acquaintance, also from Rockford and also a skater, is about to become a father. So, Keire and Zack became the catalysts for what Liu began to devise as a character-driven documentary about what he saw as being a palpable crisis in modern-day fatherhood and masculinity. For five years he followed their lives as they navigated entry into the real world, spotlighting maturation, first-jobs, fatherhood, relationships, and responsibility. All the while reflecting on less than ideal childhoods and adolescences.

The result is an honest and painful, but necessary, portrayal of how dysfunctional environments and trauma can easily travel through generations, sometimes resurfacing in individuals like a dormant virus, and often impairing people from moving forward. Compelling Liu, in fact, to include himself and his story in the film, something that wasn’t originally intended. And so, Minding the Gap tracks these three stories of boys that grew up in pain in Rockford, Illinois, and weaves them together through their common way of escaping it all: skateboarding.

The art of skateboarding itself, even though understandably taking a backseat to the dramatic subject and tone of the film, is nevertheless beautifully depicted, sometimes with long shots of Keire and Zack gliding in deserted streets and parking lots, in a fluid continuous motion, offering a sense of suspended time, and summoning for the viewer how freeing and cathartic skateboarding is for them.

Minding the Gap is a sober, elegant, and introspective documentary. It’s even more impressive because, in addition to being a first-time director, Liu also wears the hats of camera operator, subject, cinematographer, co-producer and co-editor. It is a hauntingly powerful first effort from young filmmaker with personality and a distinct point of view. Bing Liu has made a mark, and is definitely someone to keep an eye on going forward.