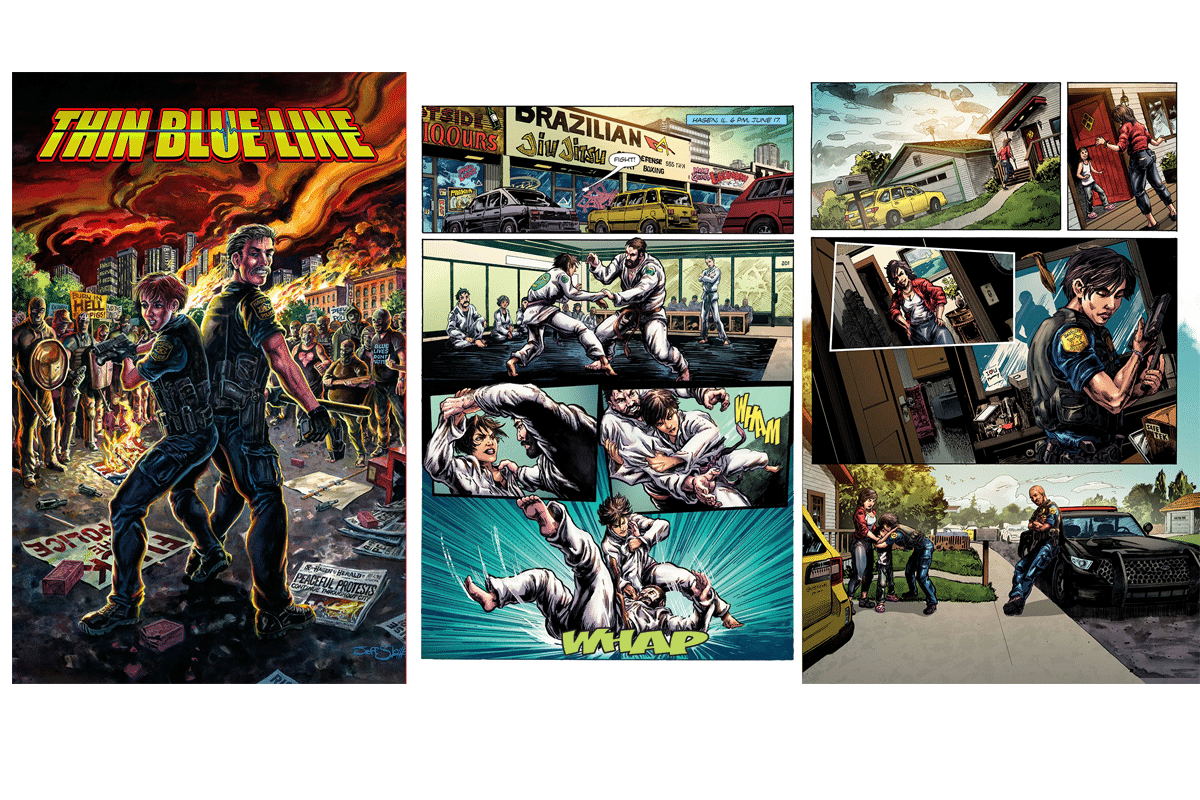 You’re either for the rule of law or you’re not.

Thin Blue Line follows two police officers, single mother Valeria Baca and her partner Bob Mack through a hot summer night as the city burns. Ignited by reports of a police shooting, Hagen, Illinois turns into a battlefield as activists mark off an “autonomous” zone, rival gangs attack one another, and opportunists race toward the fire like freelancers to an open bar.

Assigned to protect the mayor, Valeria and Bob find themselves on the run when anarchists storm city hall. In their harrowing drive to escape the kill zone, Valeria and Bob encounter gangs, thugs, and right-wing militia. Featuring a diverse cast of characters, Thin Blue Line unflinchingly examines the chaos engulfing American cities, as well as the personal lives of those who risk everything to preserve the rule of law. Thin Blue Line will keep you riveted from the first page to the last.

The book is completely written & drawn! The IndieGoGo campaign is to raise funds to finish colors and lettering in order to get this timely graphic novel published and in the hands of readers everywhere.

Full time police officer and penciler for Thin Blue Line, Joseph Arnold managed to pencil this book faster than many full time professionals! Inker and colorist Jeff Slemons is a brilliant artist in his own right who has worked with some of the top names in the business. You can check him out at www.jeffslemons.com.

Thin Blue Line is a tale of American law enforcement where officers often find themselves in street wars against violent criminals, government corruption, organized anarchy, and unethical cops in their ranks.

The ladies at RAGIN’ had a sit down with Mike Baron to talk about his creative journey, his writing process, and love of comics.

Baron’s other creations include Josh Pratt, a reformed motorcycle hoodlum turned detective, and star of the Bad Road Rising series. The series includes Biker, Sons of Privilege, Not Fade Away, Sons of Bitches, and Buffalo Hump, coming from Liberty Island Press.

He is also the author of three horror novels published by Wordfire Press. Helmet Head is about Nazi biker zombies.  Skorpio is about a ghost who only appears under a blazing sun. Banshees is about a satanic rock band that returns from the dead. Whack Job is a science fiction novel about spontaneous human combustion, that is also from Wordfire Press.

His titles can be found on Amazon.