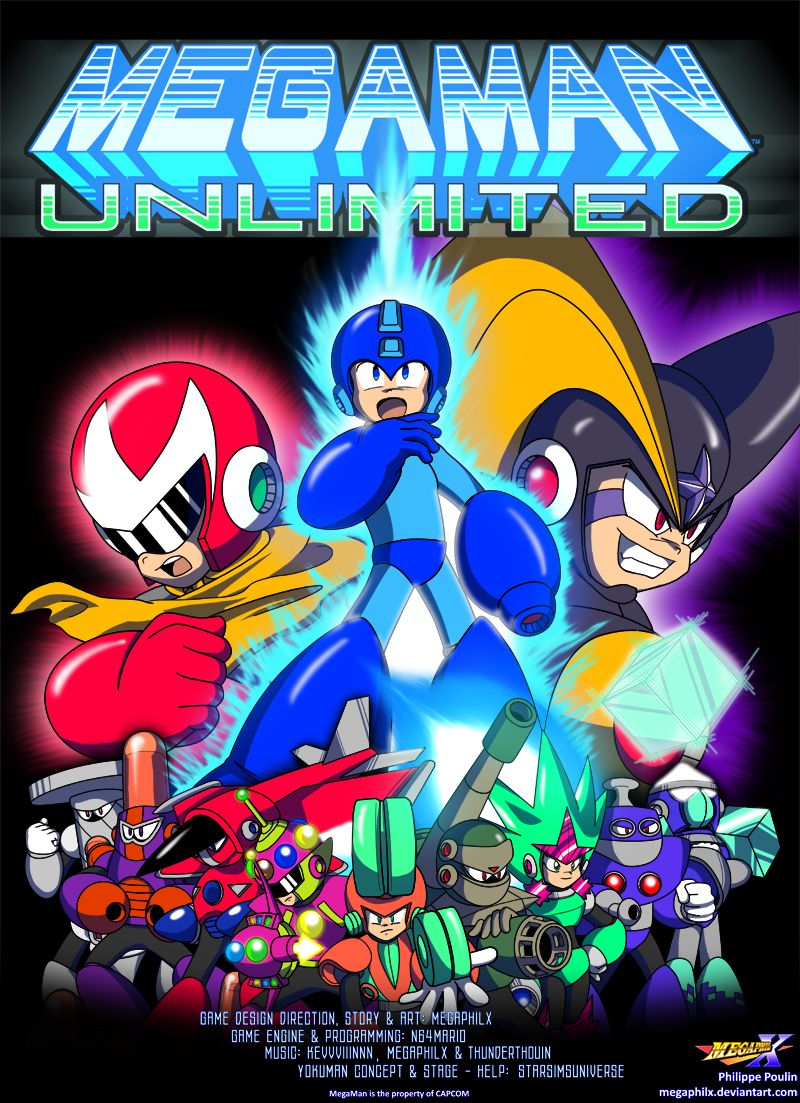 To call Mega Man Unlimited a game at the design quality of the Capcom development team itself, would be an understatement. After the less than stellar treatment that Capcom has give their most iconic character recently, it was about time someone better qualified picked up the helmet. That someone turned out to be MegaPhilX, a Mega Man fan with a taste for game design. And man oh man, did he develop one hell of a Mega Man game.

If you haven’t heard, MMU is an fan created follow up to Mega Man 9 designed by MegaPhilX. It all started when MegaPhilX decided to put up some art and some flash animations to show off what he imagined the MM9 sequel might look like. Much to his surprise, the community quickly decided that they’d rather see his vision brought to light, than whatever Capcom was likely to churn out (which actually turned out to be good as well). After 5 long years of development and fan input, Mega Man Unlimited was finally released to the public, and the response has been overwhelmingly positive.

I’m here to jump on the, MMU kicks ass bandwagon in hopes of getting this awesome game into the hands of more gamers. MMU harkens back to the classics of MM1-3 as well as the more recent throwbacks that have been released by Capcom. All of the magic that made those 8-bit adventures exciting and fun have been tweaked and perfected to craft one of the best Mega Man games of all time. You’d think that if we were going to get such an amazing MM game, it would be from Capcom. But, MegaPhilX has shown us what a lot of effort and love for a property can do for game development.

As a said before, MMU takes advantage of the simple, but elegant stylings of the 8-bit era. Each character model is hand crafted, and looks like it’s belonged in the Mega Man series from the start. It introduces a plethora of new enemies, so even veteran Mega Man players will be in for many surprises. I can’t tell you how startled I was the first time a Met (yellow hard hat) popped up, not to walk around, not to shoot a little pellet, but to whip out a massive laser gun and blast me. Each enemy is intelligently designed to catch you off guard initially, but always give you a fair chance against it. Once you know what’s in store for you, you can learn how to quickly defeat enemies with little issue.

The levels of MMU, oh the levels, these have to be some of the most cleverly designed levels ever seen in the Mega Man franchise. With new traps, tricks, enemies, and hazards, every level is filled with new obstacles to overcome. You will die… a lot, unless you’re some sort of strange Mega Man prodigy. These are tough levels, and they are longer than traditional Mega Man levels. The thing is, no matter how often you die, you’ll never have anyone to blame but yourself. There is always a logic behind the madness, once you figure it out it is a lot easier to get through the level. This is an old school game, and if you’ve forgotten, that means memorization is key to success.

Each master robot seems to be crafted with loving care, even the more absurd ones. Nail Man, in particular, is a goofy idea. Paired with his second in command Hammer Man, it clearly points fun at the more absurd master robots in the Mega Man pantheon. The boss fights themselves are difficult, but as with everything in MMU, if you play it a few times you’ll figure it out. There is even a secret boss you gain access to by collecting letter tiles throughout the game. This adds another level of replayability for all of the different levels.

Mega Man Unlimited is a shining example of what fan created content can be. It has not only lived up to the property that it’s borrowed from, but has escalated it to a new level. If every NES game had a fan as dedicated as MegaPhilX, we’d all be better off as gamers. With an clever level and enemy design, a knowledge of the series, and gorgeous 8-bit graphics, MMU is easy to recommend to any gamer who is a fan of platformers. Just one question MegaPhilX, when do we get MMU 2?

Check out Mega Man Unlimited on PC for FREE!

What platform is this game on? PC, Mac, consoles?

Mohseen Lala It’s a free game on PC, you can use a controller with it.