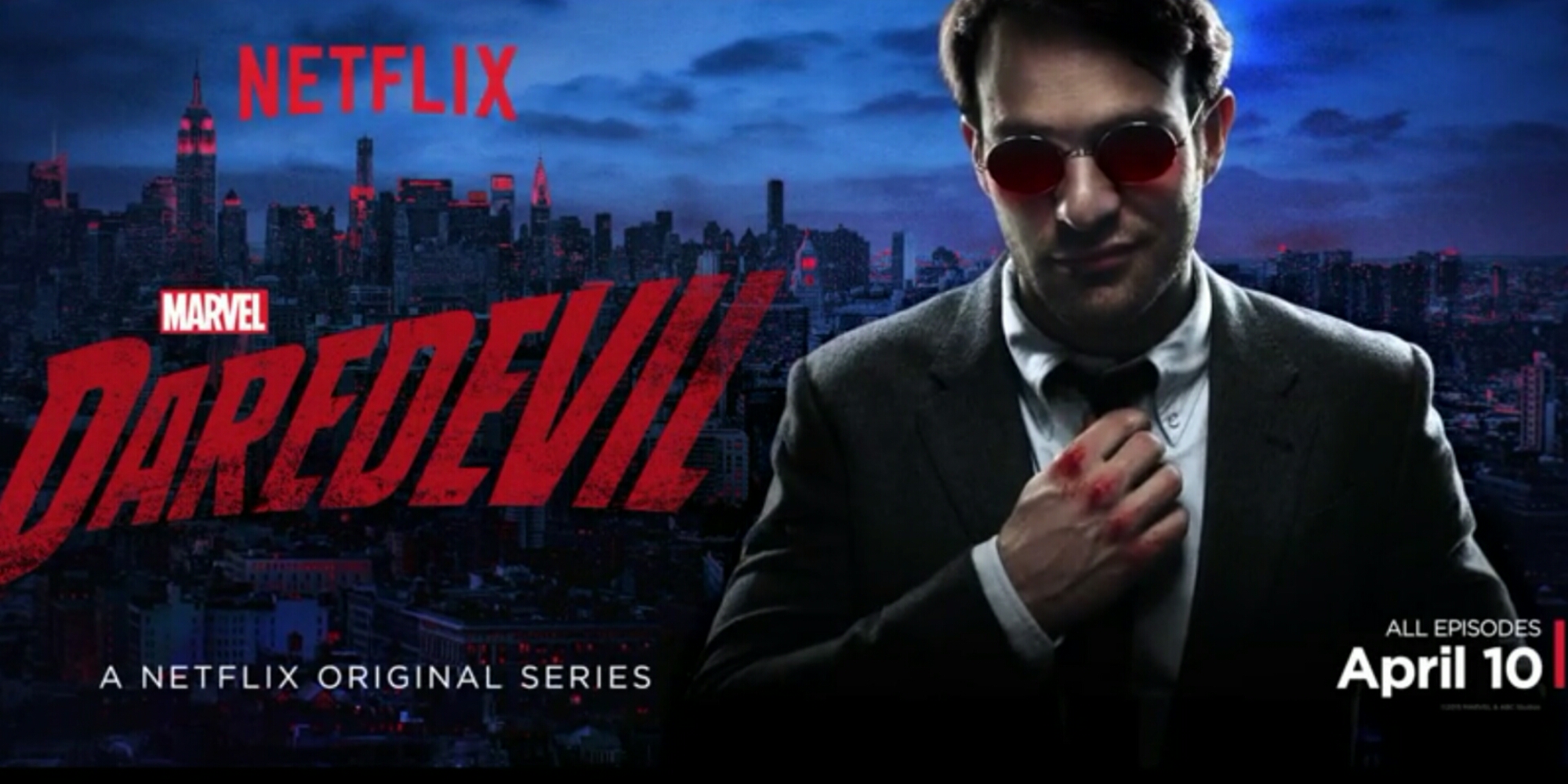 Marvel has joined the superhero TV show bandwagon with Daredevil, a Netflix-exclusive show created by Drew Goddard. From the first episode, the atmosphere is set. This is undoubtedly a dark, Batman-esque series, as it takes place at night or in dimly-lit areas most of the time (in a place called Hell’s Kitchen, New York, no less). It includes lots of gore that would probably not be allowed on a normal TV14-rated show, utilizes lots of intense fighting sequences, and introduces chaos and corruption as the norm.

If You’re Not Familiar, Here’s the Premise

Matthew Murdock (Charlie Cox) is blinded at a young age by toxic chemicals, and learns from various adult figures how to cope with the loss of his eyesight and turn it into an advantage. Among these adults is his father, the boxer named Battlin’ Jack Murdock, whose example of fighting and staying strong carries over into Matt Murdock’s adulthood. This backstory is revealed through flashbacks, an increasingly popular form of TV storytelling.

The main story takes place when Matt is a thirty-something adult with a newly-established law firm alongside his buddy, Foggy Nelson (Elden Henson). They live and work in the middle of Hell’s Kitchen, New York, out of a tiny, and grubby little office with a business sign written on a piece of paper, and resolve to change the world one step at a time. Meanwhile, at night, Matt Murdock ventures out into the shadows of the city as the vigilante Daredevil, known in the beginning as “the Mask.” He uses his skills and “radar sense” to fight crime and find answers that will help his cause as a lawyer. 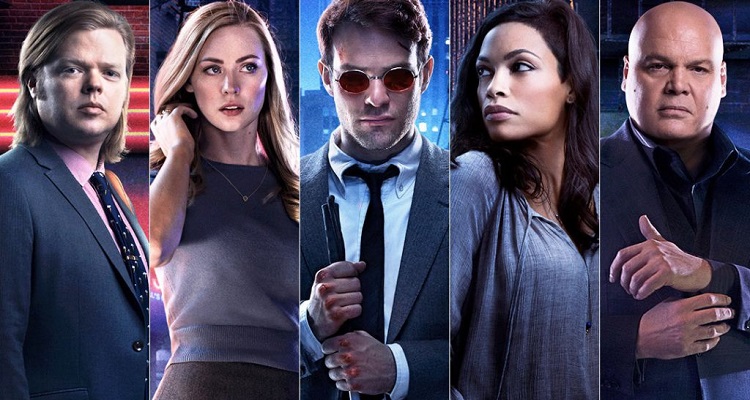 Several important characters are introduced early on, such as Karen Page (Deborah Ann Woll), a truth and justice seeking young woman with a mysterious background who ends up as Matt and Foggy’s secretary and quickly becomes a romantic interest for both of them. Another is the nurse Claire Temple (Rosario Dawson), who takes on the (big) responsibility of patching up Matt Murdock’s wounds after his Daredevil fights. Viewers are also introduced to several villains, such as Wilson Fisk (Vincent D’Onofrio) aka Kingpin and his creepy, aloof, smooth-talking assistant James Wesley (Toby Leonard Moore).

The Villain to Take Down

Daredevil does its best to illustrate the struggles that a crime-ridden, justice-lacking city goes through. Black and white doesn’t exist. This plot and action lives in the grey area, with Daredevil and his enemy Kingpin being portrayed as two sides of the same coin. Both want justice and to make their city a better place, and both are characterized as flawed heroes. This throws the idea of the “hero” into question from the get-go, and investigates how it’s interpreted differently and subjectively by everyone based on individual experience.

These themes contribute to the overall darkness of the show, along with rampant brutality and corruption (powerful antagonists can just make things “go away”). In the first four episodes alone, several people are assassinated or commit suicide, and the audience gets a full view of a compound fracture, a desiccated corpse, multiple knife wounds, lots of splashing blood, someone impaling his own face on a rusty fence spike, and a head getting smashed to a pulp by a car door (and though most of that scene is in shadow, the audience gets the full sound effects). 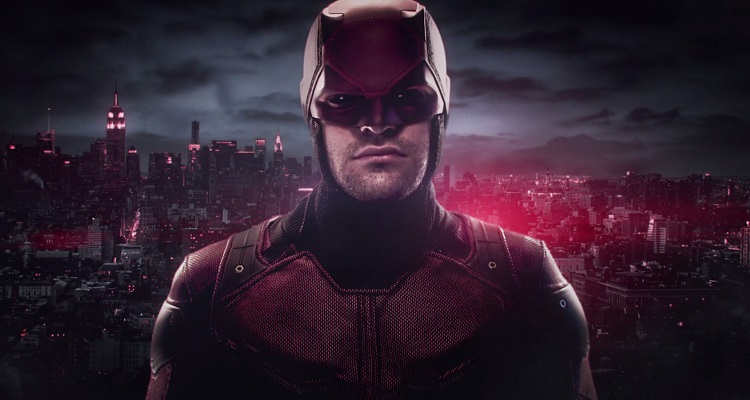 To use the character Claire Temple’s words, Matt Murdock is a “lawyer by day, vigilante by night.” He has no other special powers other than enhanced senses due to his training to “see” without sight, excellent martial arts skills, and extreme pain tolerance and durability. As Charlie Cox described his character, “He’s a lawyer by day, and he’s taken this oath. But every night he breaks that oath, and goes out and does very violent things.” In fact, one of the first scenes of the show is of Matt Murdock going to a Catholic confessional booth and asking for forgiveness for things he is yet to do. Shortly after this, the viewer gets to see his first fight scene.

Matt Murdock is a talented lawyer and a skilled orator, and has a tendency to leave his business partner Foggy in the dust with important decisions. But he combines his Daredevil skills with his lawyer skills by being a human lie detector (listening for heartbeat changes), which is, admittedly, pretty cool, and by finding ways to get people to talk.

As Daredevil, Matt Murdock first wears plain black clothes and a black fabric mask that covers his face to the end of his nose, the first rendition of his crime-fighting costume. As time goes on, however, the audience will get to see the evolution of this costume into the red suit that he traditionally wears in the comics. Also, at first, he fights without weapons, but soon moves on to stick fighting, and will undoubtedly move on to fighting with his trademark cane weapon.

Murdock is painfully aware of crime and corruption in Hell’s Kitchen, New York, and does his best to fight it, even though he’s just an ordinary man with special training. This makes him into a sort of “everyman” hero, someone who recognizes injustice, has the ability to stop it, and does something about it. This is first instilled in him by his father, whose saying “it’s not how you get knocked down, it’s how you get up” resounds throughout the beginning of this series.

He occasionally seeks solace in his Catholicism, mainly through talks about good and evil with his priest, Father Lantom (Peter McRobbie), but often branches out. He maintains a philosophy of not killing anyone, though he is perfectly willing to beat people senseless and into comas. This philosophy, however, along with his ideas on how to save the city, is consistently questioned, and will remain a major part of the Daredevil story arc.

Daredevil is incredibly well-written and well-acted. It maintains an honesty and openness about the world with its audience that continues to be well-received. IMDb has rated it at 9.1/10, and TV.com has rated it at 9.4/10. So if you have access to Netflix, try it out. The entire first season is there, so you can take it in at your own pace. Just be warned–it gets pretty gory and hardcore in plotline and action.