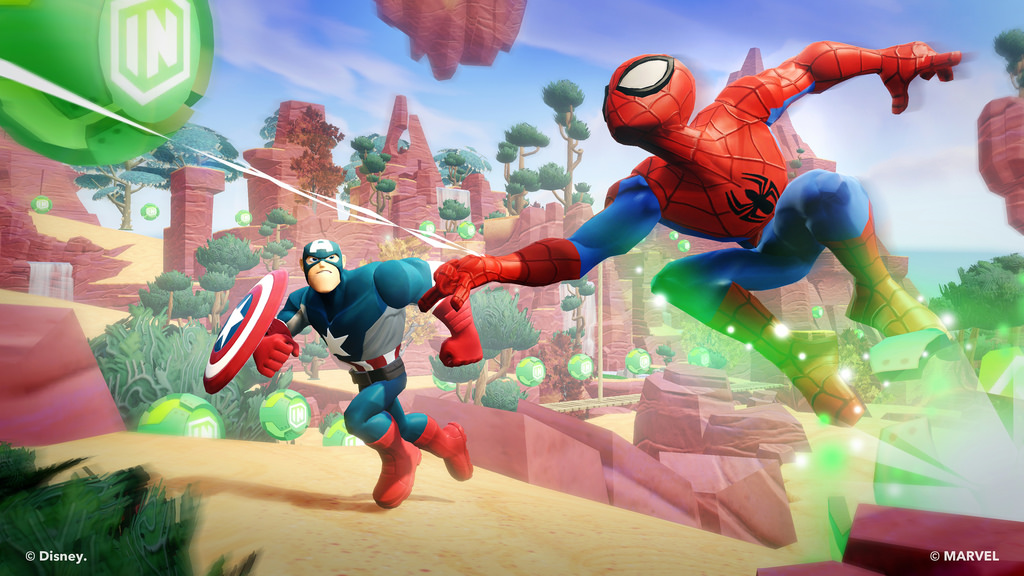 On Friday, a cabal of Marvel superheroes arrived in London. Their mission? To deliver the latest addition to the Disney Infinity universe: themselves.

The heroes moved under cover of night so as to avoid attention. Even so, however, our heroes managed to accomplish some amazing feats. The Hulk cleared the way, raising a bridge that was impeding the boat’s progress. The action only got more intense from there, however, and the heroes were forced to combat evil Ice Giants summoned by Loki to ensure that the cargo was safely delivered. In the end, our heroes prevailed and the streets of London were returned to normal.

Besides the clever use of beamcasting, a technology that uses lasers to create complex images on nearly any background, arrival of the Marvel heroes also signaled the latest addition to the Disney Infinity 2.0 franchise, and the Marvel Heroes are now available for purchase.

These latest additions include heroes like Thor, Iron Man, and even Captain America, all with their own unique combat abilities, story, and action figurine. This continues the trend that Disney has set since the game’s release last year of using figurines to sell what is essentially DLC.

Most of the time when people think about DLC, they think about day 1 DLCs that are little more than AAA companies’ devious plots to charge $10 more for a full game. DLCs like Mass Effect 3‘s From Ashes all leave a bad taste in our mouths because there’s really no excuse for them. The game developers simply decided they were going to hold some of the game content ransom in exchange for more money, essentially a sneaky way of raising the price of the game.

Disney Infinity 2.0, on the other hand, is an example of DLC done right. Where most franchises would be putting out an entirely new game by this time, or at be least working on one, Disney Infinity 2.0 is essentially prolonging the active lifetime of the game by continuing to release more and more characters and stories through the use of these physical expansion packs. Better yet, instead of simply being digital content, each of the packs comes with an action figure, and who doesn’t like action figures?

Ironically enough, this business model was first attempted by Half Life 2. The original idea was that the game developers would simply advance the story through the smaller installments in the series, called Episodes. These Episodes would use the same game engine, the same characters, the same weapons, and the same enemies, meaning that the game creators could put content out faster and on a more regular basis.

Valve Incapable of Counting to the Number 3

Disney Infinity 2.0 seems to have picked up the strategy and run with it. Over the course of the last year, the game has had content pack after content pack released, each one focusing on the characters from one Disney franchise or another. This time around it’s the Marvel universe. Not only that, but there’s the added bonus that some of the characters from the other expansion packs can cross over into new sets, and vice versa. For example, characters from the Spiderman set can cross over into the stories of the Guardians of the Galaxy characters.

That is the most exciting thing that’s going on here, I think. It’s not the fact that you can now play as Iron Man and Thor, even though that is really cool. It’s how Disney Infinity 2.0 is showing all the other game developers how DLC and expansion packs should be done.