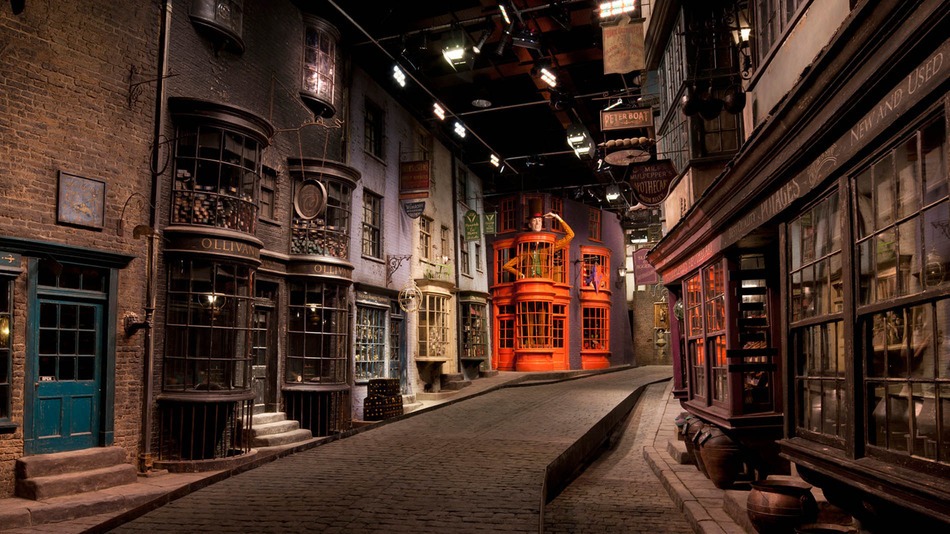 Harry Potter fanatics have never cared about standing in lines, but while once we used to queue outside bookstores, waiting to get our hands on the latest volume, now we stand for a different cause. 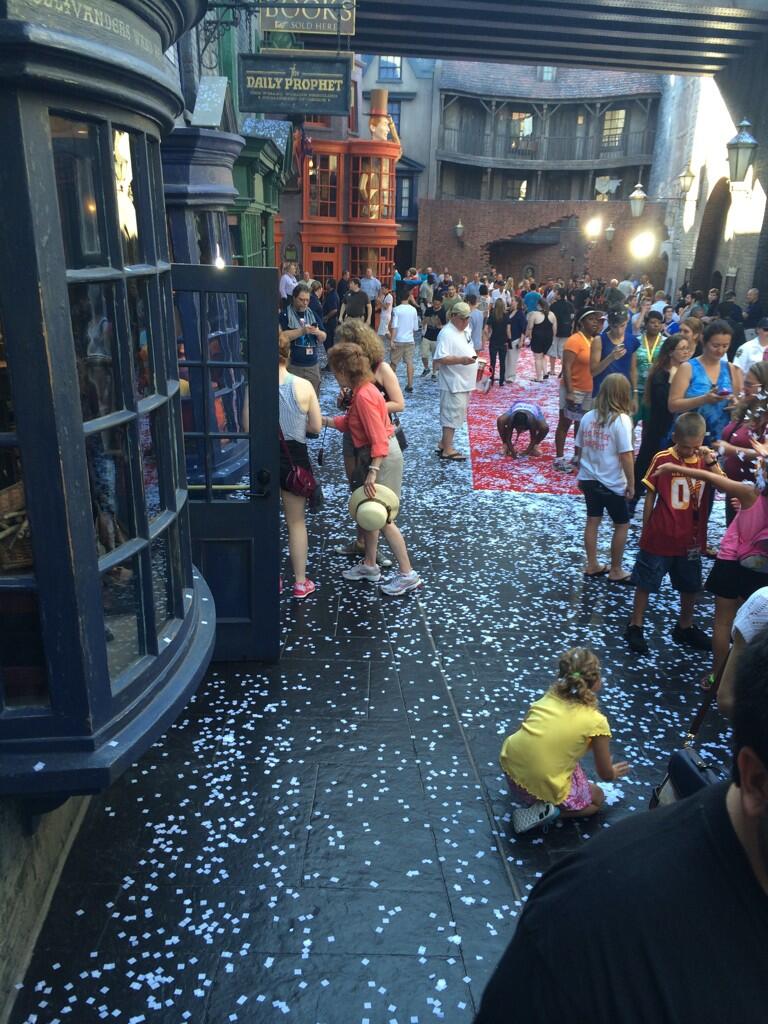 An excited and crazed line of Harry Potter enthusiasts extended in Florida yesterday, July 8, 2014, when Universal Studios Orlando finally opened its second phase of the Potter theme park: the much-hyped Diagon Alley and London section. People had gathered for the occasion of the highly anticipated new section and ride as early as four in the morning, despite the grand opening only beginning at 8 a.m. Cue fireworks, with a short announcement, and Diagon Alley opens! A testament of the dedication of the crowd: the wait for the rides were anywhere between 2 to 4 hours.

Thankfully, though, it’s not expected to remain that way forever. Wednesdays onward, the park stays open to the public from 9 a.m. to 10 p.m. 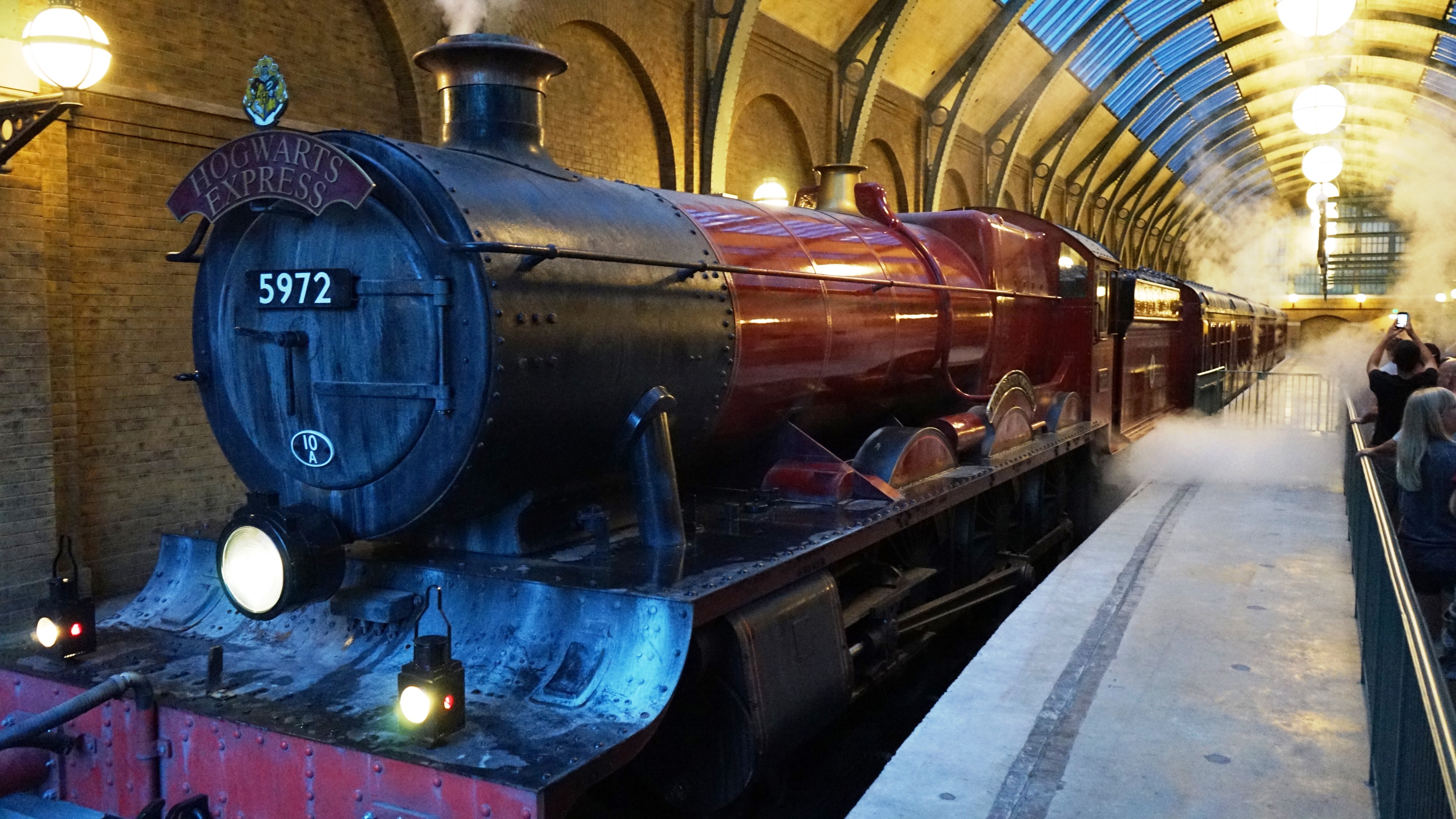 Located in Florida, The Wizarding World of Harry Potter is perhaps the world’s most ambitious and detail-oriented amusement park and this new addition is said to have surpassed all of its previous commendations. The attraction, which hosted its grand opening four years ago, closely mimics the fictional world of witches and wizards crafted by British author J.K. Rowling in her groundbreaking fantasy series commonly known as Harry Potter. The giant project was undertaken in careful collaboration with the author and Warner Bros. Since it’s public opening in 2010, the theme park has served as a popular vacation destination for kids and adults alike and the addition is expected to only add to the crowds and fans.

Universal’s Diagon Alley is a recreation of the cobbled (and invisible to muggles) area of London, England as described in the Harry Potter books and movies. After much speculation, on December 6, 2011, the studio released an official announcement about the ongoing construction of the new inclusion. The name of the flagship attraction, “Harry Potter and the Escape from Gringotts,” was made public on the 23rd of January, 2014 and vital details, including the confirmation of the Hogwarts Express connection, were released on May 8.  Finally, on the 1st of July, the studio opened the Hogwarts Express for technical rehearsals. The ‘soft opening’ began on  July 3 and the grand opening date was announced as July 8, 2013 on The Today Show.

Social media, of course, blew up exponentially. There was a 25-day long Twitter trend going on called ‘Potterwatch‘ that updated followers on the latest news related to the grand opening,  and Harry Potter fans on Tumblr reblogged every single shot taken during the rehearsals and soft openings. In response, Diagon Alley streets were made available by the Warner Bros Studio Tour London to be viewed by all via Google Maps. On the opening day, the main event on Twitter was the live-tweeting of people standing in line, trying Gillywater, and pointing enchanted wands at enchanted windowpanes.

Here, dedicated to the entire magical fandom, yours truly brings the full comprehensive guide to everything you need to know about Orlando’s brand-new expansion at The Wizarding World of Harry Potter:

Visitors are to enter through King’s Cross Station at the ‘London’ waterfront, make their way to the Charing Cross Road bookstore, and reach the grand entrance of Diagon Alley.  The waterfront ends at 12 Grimmauld Place, which Potterheads will remember as the headquarters of the Order of the Phoenix and the ancestral home of Harry’s godfather, Sirius Black. Other features include a replica of the Eros Fountain of Piccadilly Circus and a Knight Bus prop, complete with a talking shrunken head and bus conductor, Stan Shunpike. The main section, however, is the long stretched Diagon Alley road, with it’s myriad of shops, storefronts, and eateries. Identical to the movies, the path leads directly to the main attraction of Gringotts, the wizards’ bank, with goblins inside and a fire-breathing dragon mounted atop. And for anyone in the lookout for something original, two new streets called Horizont Alley and Carkitt Market (named and designed with Rowling herself) are also part of the new addition. Sounds like a dream, doesn’t it? 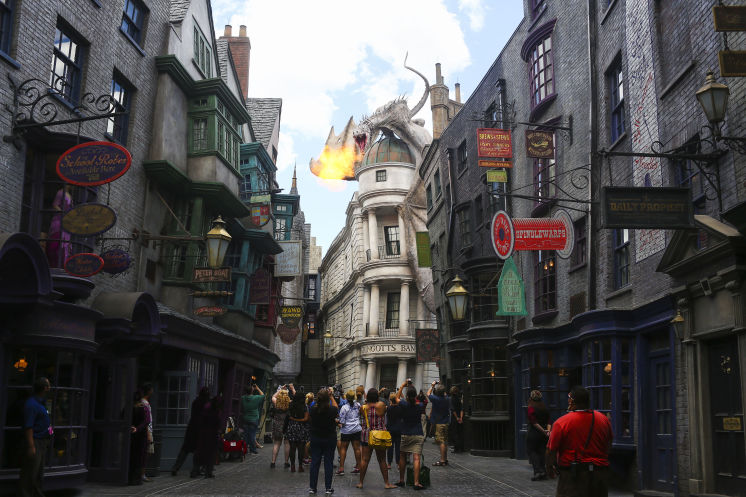 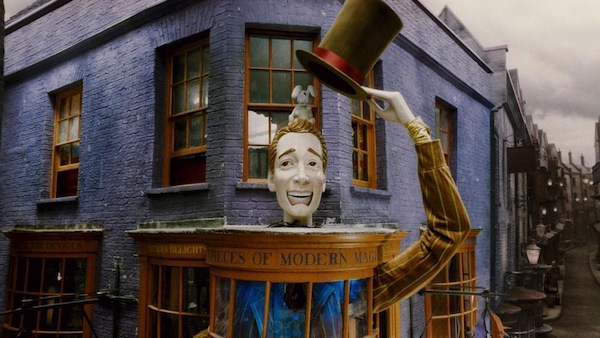 Excited? Book your tickets now, or if you’re a poor broke college kid like me, read more spoiler-free  overviews, watch these trailer videos and take a virtual ‘flying tour‘ around the park, courtesy of Universal Orlando. Let the magic begin…again!