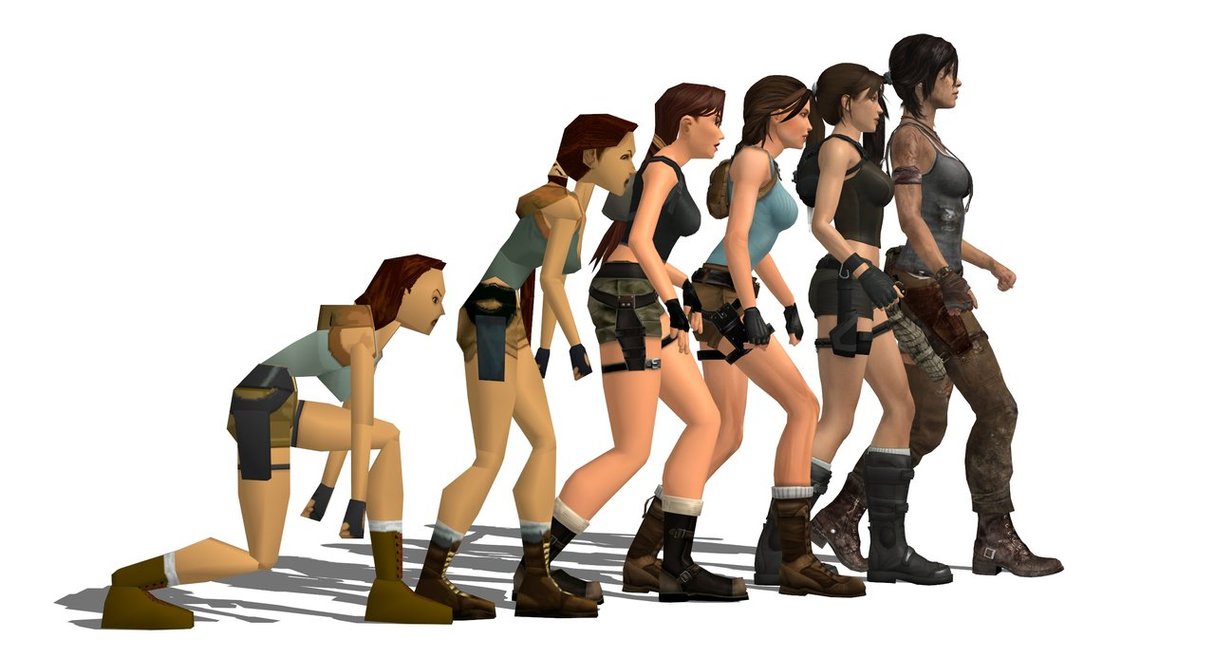 With the big reveal of Rise of the Tomb Raider at this year’s E3 came a lot of waging tongues panting hotly for the sequel to last year’s critically and financially successful Tomb Raider reboot.  While 2015 (the year slated for the sequel’s release) may be a while off, that doesn’t mean that fans have to go a full year without any fun tomb-raiding action.   Below is a list of Tomb Raider star Lara Croft’s previous adventures that may help tide fans over until 2015 hurries up and gets here:

And with one gun-blazing fight against a pack of vicious wolves atop a snowy Peruvian mountain, the gaming community got to know our feature heroine Lara Croft, a British aristocrat who liked to spend her spare time raiding dangerous booby trap- and man-eating animal-infested tombs aided with only by her wits, razor-sharp reflexes, and trusty pistols.  In this first installment, business tycoon Jacqueline Natla commissioned Croft along with two other, less competent tomb raiders, Larson and Pierre, to find the long-lost pieces of an artifact called the Scion.  The job would take Croft from the hidden valleys of Peru (and dinosaurs!)  to the caves of Atlantis, where she would discover Natla’s true intentions with the Scion.

In this next installment, Croft travelled all the way to China (and fought more dinosaurs) only to find herself at odds with psychopathic Marco Bartolli and his cult of crazies, the Fiamma Nera.  Like Croft, Bartolli was after the Dagger of Xian–a legendary artifact that an ancient Chinese emperor used to turn himself into a dragon and wage war across his land.  The only catch was he had to stab himself in the heart with the thing to assume the dragon’s form–and Bartolli was just nutty enough to do the same thing.  To stop him, Croft traveled from the canals of Venice back to the Great Wall of China–stopping at a shark-invested sunken ship along the way–but not before Bartolli got all big, scaly, and fire-breathing.  The end result was one of the most memorable boss fights in the history of the series.

Conspiracies and cannibals and aliens (and yes, dinosaurs), oh my!  This installment opened with a meteorite crash that occurred thousands of years ago in what is now Antarctica.  Fast forward to the present day, when Scottish research Dr. Willard and his team stumble across the grave and diary of one of Charles Darwin’s sailors as well a mysterious green stone buried in the Antarctic snow.  The diary reveals that the stone is actually one of four, all carved from the meteorite–and all containing some sort of mystical power, it seems.  Enter Lady Croft, who finds herself footing it across the jungles of India at the same time as Willard’s men, incidentally searching for the same artifact with no clue as to what it really is.  When all of the men either die or go crazy and then die, Willard enlists Croft’s help in finding the rest.  Her search would take her through the South Pacific islands, the London underground, and even the infamous Area 51.  Along the way, she discovered a conspiracy at the heart of her mission–and at the heart of the conspiracy, Dr. Willard.

Croft faced no long airport lines (or dinosaurs) in this installment; save for two traveling levels that took place in Cambodia and touched on her past with mentor-turned-rival Werner Von Croy, this adventure took place entirely in Egypt.  There, Croft unwittingly released Egyptian god Seth, who then possessed her old mentor and sets in motion a prophecy to bring about the end of the world.  In order to stop Seth and save both Von Croy and the world, Croft imprisoned the god–and seemingly paid the ultimate price to do so.   The game concluded with an ending that shocked the gaming community: Croft apparently falling victim to the collapsing temple from which she was trying to escape.  (Or did she?)

This installment featured no true appearance from Croft.  Instead it consisted of remembered adventures told by some of her closest friends who’d gathered at the Croft mansion to honor her memory.  These adventures featured both new and returning characters (including Croft’s dim-witted rivals from the original Tomb Raider, Larson and Pierre) and relived her time pursuing the Philosopher’s Stone in Rome, seeking the Spear of Destiny off the coast of Russia, evading Death himself on an Irish island, and reclaiming a lost prize from her mentor-turned-rival Werner Von Croy in his tightly guarded New York City headquarters.  The game ended with an update on Von Croy’s search for the presumed-dead adventurer in Egypt–and the finding of his former student’s famous minipack.

This installment (which marked Tomb Raider‘s venture onto the Playstation 2) saw the return of Lady Croft in the flesh–a hardened, much more cynical flesh.  The game opened with a noticeably darker tone: Croft paying a visit to the Parisian apartment of her former mentor, Werner Von Croy–a visit that ended with Croft blaming Von Croy for the events in Egypt and then Von Croy’s murder.  Croft, who didn’t rightly recall what happened behind the Blame Gam and the murder, found herself on the run from the police and hiding out in the wrong part of the City of Lights.  As her search for the truth grew thicker, Croft butted heads with the likes of the Mafia, a secret society called the Kabal, a shady fellow named Kurtis who kept an uncomfortably close tail on her, and a conspiracy to awaken the last known member of the dangerous angel/human hybrid race, the Nephilim.

Following the (unfortunate) failure of Angel of Darkness, Tomb Raider publisher Eidos fired classic Raider developer CORE Design and hired Crystal Dynamics in an effort to repair Croft’s credibility.  The first major installment that Crystal came up with was Tomb Raider: Legend, which marked a complete reboot in the series’s story, history, and continuity.  In this installment, Croft found herself going to head-to-head with someone whom she’d presumed dead: her old friend, Amanda Evert.  Evert was after the fabled sword Excalibur–which, Croft discovered, could be the only way to discover what happened to her mother, whom she watched disappear mysteriously when she was a child.   Her journey saw her through a myriad of locations, including Bolivia, Japan, and England, before she discovered that her mother was transported to the mythical land of Avalon.

This installment is a graphically rich remake of the original Tomb Raider with elements from the previous installment, Tomb Raider: Legend, thrown in.  In it, Croft again pursues Natla at the heels of her henchmen, Larson and Pierre (who aren’t nearly as dim-witted as their previous incarnations).  This version of the 1996 classic featured a deeper plot and even deeper character development than those of its inspiration.

Marking Tomb Raider‘s first appearance on the Playstation 3 and X-Box 360, this installment picked up where Legend left off: Croft seeking Avalon and, ultimately, her lost mother.  She immediately learns that her mother was transported not to Avalon but to Helheim, the Norse underworld, and that entering it will require a small token: the Norse god Thor’s famous hammer.  Croft hot-footed it through a variety of locations, including the jungles of Mexico and the bottom of the Mediterranean Sea, encountering both old friend-turned-foe Amanda Evert and old foe-turned-even-greater-foe Jacqueline Natla along the way.  When Croft finally obtained the hammer and entered the underworld, she was met with a heart-breaking reality: her mother had become a zombified citizen of Helheim who was so far gone that she attacked her own daughter on sight.  Following this tragic revelation was a second–and final–shotdown with Natla, during which Croft showed the villianess that “hammer-time” wasn’t just a line in an old M.C. Hammer song.  The game ended with Croft putting her mother’s death and her rivalry with Evert behind her, thus ending this continuity’s story and leaving the series wide open for 2013’s loudly acclaimed second reboot.