Looking for your daily radiation fix? Don’t ask the TSA…anymore… 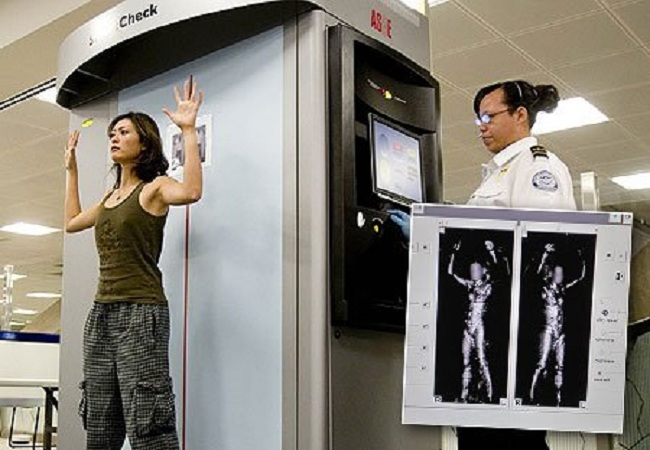 The Transportation Security Administration (TSA) announced this week that it will be removing all of their full-body x-ray scanners from airports. Why would a semi-obnoxious administration like the TSA, do something that might potentially make the rest of us happy, you ask? Well, maybe they are just tired of looking at naked people all day, but more than likely, it is because of the Congress-mandated deadline to create software that automatically detect suspicious items on a person could not be met in time, which left TSA agents having to look at each ‘virtual strip search’ individually.

Unfortunately for frequent flyers, the whole ‘complete strangers seeing you nude thing’ wasn’t the only issue with the full body x-ray scans. You guessed it! It’s the x-ray part. Anybody who knows anything about x-ray machines, knows why you have to wear a lead vest while the doctor runs out of the room like he’s trying to escape impending doom during a normal x-ray. Hint: It’s the radiation. Sadly, even small doses of radiation on a regular basis poses a pretty substantial cancer risk

The Food and Drug Administration recommends only a very small dose of radiation annually for any one person, and that is only if it is medically necessary. So, if you fall and break both of your legs, an x-ray is totally warranted; But what about people who have to fly twice a month for various reasons? Not so much.  Unfortunately, the TSA decided to just sort of ignore the correlation between excessive x-rays and cancer. Since, they have been regularly subjecting millions of people to completely unregulated doses of x-rays.

Thankfully, it seems the end of a cancer-causing, privacy-invading era is upon us. Back in October, the TSA began storing full-body scanners in a warehouse in Texas that have been removed from some of America’s largets airports, including: LAX, Chicago O’Hare, JFK in New York, Boston Logan, Charlotte Douglas, and Orlando. When they made this move last year, the excuse had something to do with making security checkpoints faster because each scan had to be viewed individually by a TSA agent, which obviously holds up the line a little.  Now, however, it has come to light that the scanners were removed for different reasons.

Either way, the TSA is righting their wrongs (even if it is only because Congress is forcing them to) and removing the scanners from airports everywhere. In fact, back in November of 2012, the TSA sent a “show cause” letter to the maker of the scanners, Rapiscan Systems, notifying them that the long held contract to use their scanners would soon be terminated. I guess that makes it official! Thanks, TSA…better late than never. Not really.

Wrangler Moisturizing Jeans: Would you buy it?

Umm…. sorry to spoil a “good story” but does this now mean that the TSA will go more aggressively into the “enhanced pat-down” (code for “sexual assault with legal immunity”) regime, where your daughter, your grand-mother, can have her genitals fondled as the TSA look for grenades and handguns? The TSA needs to be reigned in, big time.

i hope not. Sources mentioned that they would be switching to scanners that use the same waves as cell phones to scan people as they pass through security. However, I personally agree with you. The TSA seems to lack…discretion, in a bad way.