Little girls, any woman who ever owned a trapper keeper, and even Jon Snow will squeal in delight when they hear that a Lisa Frank movie is in development. 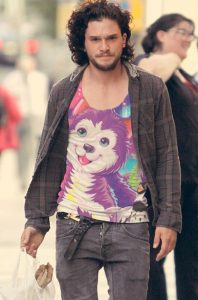 Lisa Frank started her company back in college when she realized she had a knack for commercial art. She talks about the transition in an interview with Foundations Magazine, “At first I didn’t want to do unicorns. The artist in me said no. Then I thought wait a minute this is commercial art. Let’s do what’s going to sell. So that’s how that happened.” I think it’s hilarious how nonchalant she seems about this vast empire she has created.

Word on the street is the movie will be a mix of live-action and animation exploring Lisa Frank’s world of psychedelic kittens, unicorns, and rainbows. She said her trippy and adorable creations have had back stories from the beginning and they’ll finally be fleshed out in movie form. Apparently Frank has always wanted to do a feature film. Producer Jon Shestack (Waiting, Dan in Real Life) has signed on to the project saying, “Lisa Frank’s world is cheerful, it’s optimistic, it’s hip, but it is without snark. It’s just sort of impossible to scowl when you’re smiling, and why would you want to? I’m so stoked to be part of this.”

Plot details aren’t being discussed yet but it’s safe to say this movie is going to majorly bring out the 90s nostalgia. While I admit I’m finding it a teensy bit difficult imagining how Lisa Frank’s colorful world is going to translate to a live-action/animation movie, I still have a good feeling about this one. It seems anything Lisa Frank touches turns to gold…errr…neon? (Oh come on you know I had to.)

The iTunes $0.99 Movie of the Week: ‘The Intervention’

The Rise of Mobile Gaming