Leviathan: Viral Sci-Fi Teaser Is Coming to the Big Screen

Ruairi Robinson’s online viral sensation Leviathan is going to be turned into a full-length movie produced by Simon Kinberg and Neill Blomkamp, according to Slash Films and Deadline.

Leviathan is a gritty, sci-fi Moby Dick that has the potential to be an incredible on-screen adventure. It’s a tale as old as time, really. Screenwriter Jim Uhls of Fight Club will be turning Leviathan– a three-and-a-half minute proof-of-concept video– into a full length feature, set in a sci-fi universe where men are forced to hunt giant sky whales to harvest their eggs into planetary fuel.

The People Signed on to Make This Movie Awesome

With Simon Kinberg and Neill Blomkamp attached, Leviathan has the potential to become a great film. Kinberg is a creative powerhouse who is currently the executive producer of Star Wars Rebels and is in talks to pen the script for a Star Wars spin-off heist movie set before A New Hope. Blomkamp, however, is hit or miss for most people, but he’s an unofficial, official expert at helping unique, sci-fi universes come to life. 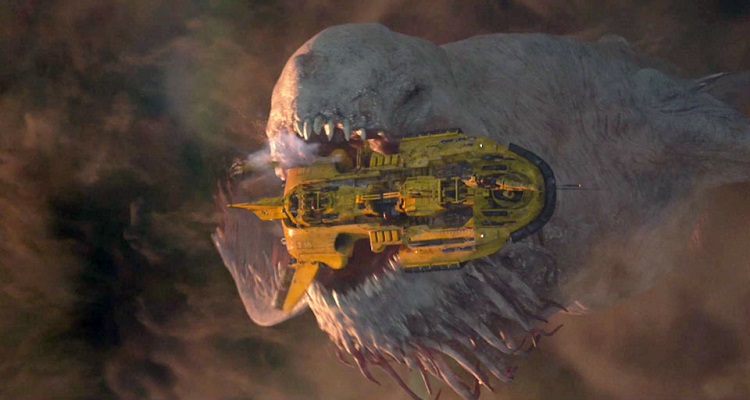 Their involvement on this project is a major plus for Robinson, and will allow for a more promising, original Leviathan full length feature, but Robinson is no slouch himself. He’s won several animated short film awards, directed The Last Days on Mars, and his short film Fifty Percent Grey was nominated for an academy award in 2002. Compared to most film makers, Robinson has an eccentric and imaginative style that goes against Hollywood convention, which is apparent in his shorts and in the stunning Leviathan trailer.

Given Leviathan‘s originality, Blomkamp, Kinberg, and Ulhs could turn this movie into something truly amazing. Say what you want about Blomkamp’s style and artistic choices, he tries to be original (even though Chappie was an amalgam of sci-fi robot flicks from the eighties, he still tries). Kinberg seems to have his hands in all the right pots when it comes to hot new sci-fi concepts, having been involved in the X-Men franchise since The Last Stand, and he’s now producing Deadpool and the new Fantastic Four. Let’s hope that his cycle for stories isn’t a formula that equates to hit-miss-hit-miss-hit-miss with Leviathan missing the mark and ending up beached.

Robinson has written some unusual stories such as “Blinky,” the story of a robot gone insane. Teaming with Jim Ulhs, the over the top yet creative idea behind this story, coupled with incredible visual effects on the dollar of a big budget studio, Leviathan is sure to become more than just a labor of love, or at the very least, a cult classic. Keep your eyes peeled to the skies for when this whale of a project is finally hunted down and captured for production.

Sci-Fi Films That Are Under The Radar