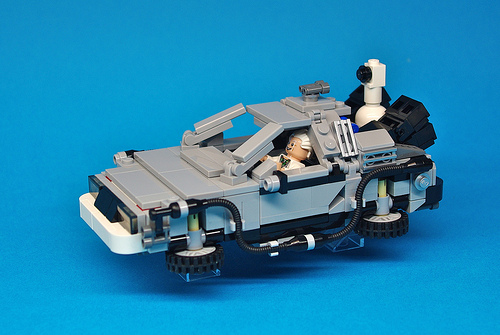 Finally available from Lego is Doc Brown’s 1985 DeLorean.  Straight out of the Back to the Future films, this mini time machine is approximately 400 pieces – sans plutonium.  After securing my very own DeLorean, I brought it home, went directly to my kitchen table, and began to piece together a dream I’d had since I was 16.  This took me about 4 hours to put together, even with the first two films playing in the background.  It’s listed for ages 10+, and that’s about right.

The Lego construction actually lends itself to the blocky look of the original car.  It has lots of details to fulfill my geek quotient.  The tiny fluxcapacitor is mid-flux.  The California license plates appropriately read “Outatime.”   The time travel display puts the current time at 10/26/1985; the destination time reads 01/28/1958, which I calculate to be three years after Marty’s initial trip to the Enchantment Under the Sea dance and 3 months before Biff took his spin in the DeLorean to bet on a horserace with the help of Grays Sports Almanac.  Lego has added its own history to this car – 1958 is the year that the first Lego brick was produced.

The most inspired thing about this is that the kit contains pieces that enable you to customize the DeLorean to fit each movie.  There are different sets of wheels and engines from the Mr. Fusion leading into the second film to the crate strapped to the hood in the Old West.  The wheels even fold up to “engage hover mode.”

There are definite cons.  The doors pop off if you try to open them with too much excitement.  Only one minifigure can fit into the Lego DeLorean at once.  As you move it around, you realize how fragile those super-cool fold-up wheels really are.  Realistically, that’s no problem, as this is meant to be put together, played with, taken apart and put back together again.  But it’s a strike against the playability aspect of the fully built product, a consideration that Lego is normally concerned about.

It’s worth noting that the DeLorean was born out of the CUUSOO project.  In the Lego CUUSOO, a designer submits a concept, and sets it up as a viewable project to the public.  Once it reaches 10,000 supporters, Lego reviews it for production.  Designers even receive 1% of the profit if the project comes to fruition.  Other accepted projects have been Microworld from Minecraft and the Mars Science Laboratory Curiosity Rover based on the real life NASA version.  Unfortunately, they rejected the Firefly model.  Heavy.

The best parts really are the detailed Doc Brown and Marty McFly minifigs.  Doc Brown has a timer around his neck, and Marty is fully outfitted with life preserver and skateboard.   The car is the perfect size for one minifig to travel up to 88 miles per hour.  …provided they don’t open the doors too often.  Still, this is a solid set from Lego, and I’m looking forward to what else CUUSOO produces.

Charlie Marie McGrath is a graduate of Northwestern University. A freelance stage director by day, she writes for Geek Insider, watches Dr. Who, and tries to beat her boyfriend at Mortal Combat by night. She also acts as a marketing associate for several local theatres. Her prized possession is her Super Nintendo.