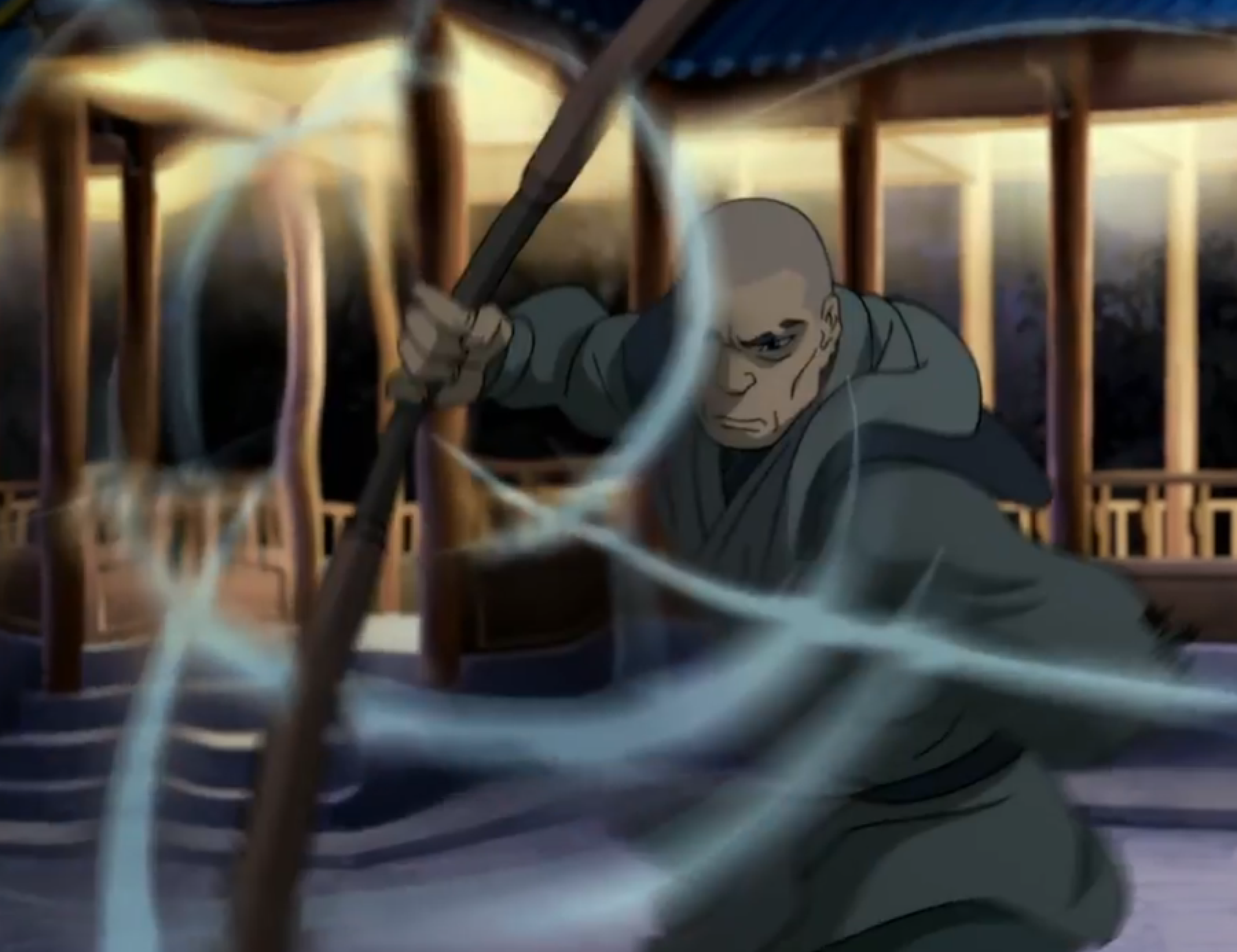 In Harm’s Way starts off with what “Korra” does best: an intense action scene.  Zaheer breaks the final member of his fearsome foursome out of the Water Tribe prison fighting off Zuko, Eska, Desna, Tonraq, and a whole slew of water benders.  Not only is the group reunited but the two lovers, Zaheer and combustion woman.

We then cut to team Avatar regrouping to locate the kidnapped airbenders in Ba Sing Se.  Bumi has a lucid moment when he says that technically, the Earth Queen has a right to conscript soldiers into her army, including airbenders.  It would be interesting to see the legal ramifications of Korra’s meddling.  In a nice throwback to the original series, Mako suggests checking Lake Laogai for the prisoners.  In order not to give away their espionage, Jinora offers to spirit project herself in.  Though they find the old Dai Li headquarters empty, Korra still thinks the spirit projection can help if Jinora uses her “connection” (wink wink nudge nudge) with Kai to project right to him. 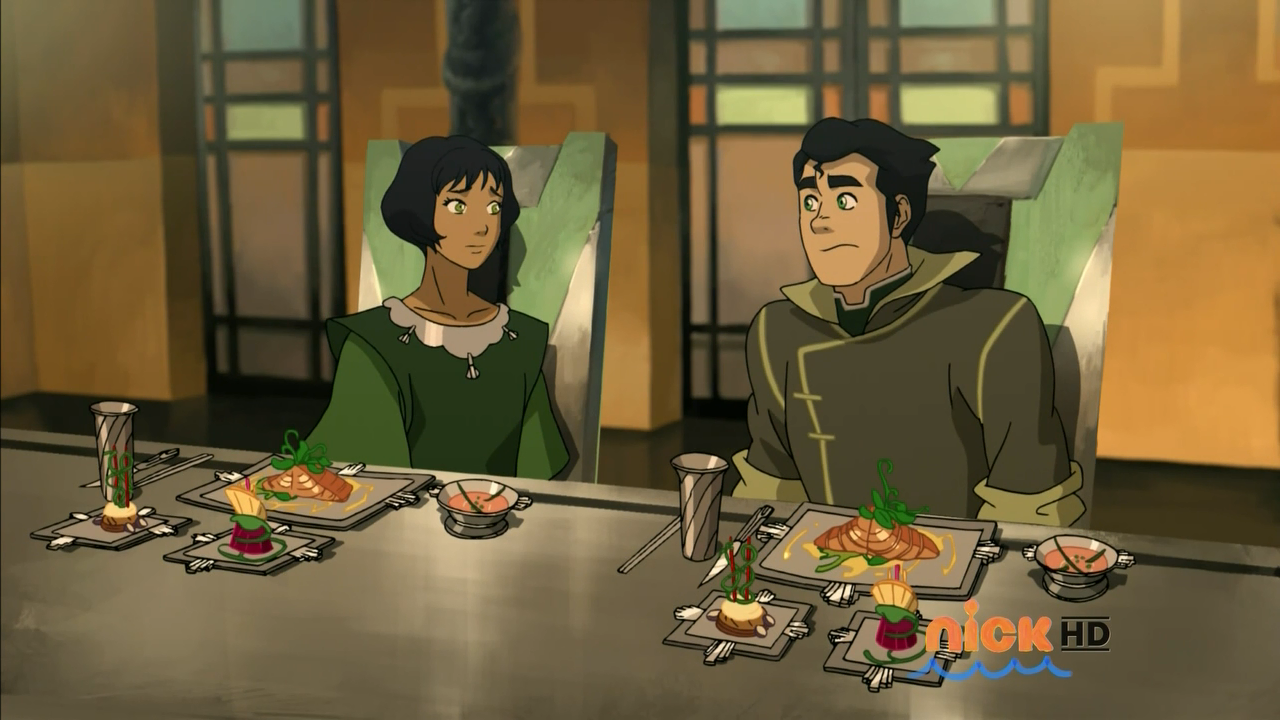 Meanwhile we see the brutal training Kai and his fellow airbending draftees have had to endure.  They do a great job showcasing the military uses of airbenders against earthbending forces.  Jinora’s spirit then appears in front of Kai in his quarters.  They share a cute little scene that seems to be continuing their puppy love relationship.

Just before planning their jailbreak under the queen’s temple, Lin appears to warn Korra about Zaheer’s escape.  Apparently, he and his entourage were imprisoned for trying to kidnap Korra as a child.  This also fills in some minor plotholes of why the white lotus was so protective of her as a child when no other Avatar received such treatment.  Lin is eager to get things over with so they can keep moving.  While the action is still impressive in this heist, the scene where Kai and Jinora reunite is cringe-worthy at best.  She kisses him on the cheek and everyone blushes but it seems forced since they only just met.  They all escape and Tenzin does the right thing by letting the airbenders choose whether or not to come with him.  They choose to join him at the northern air temple and we end the episode with his joyful tears. 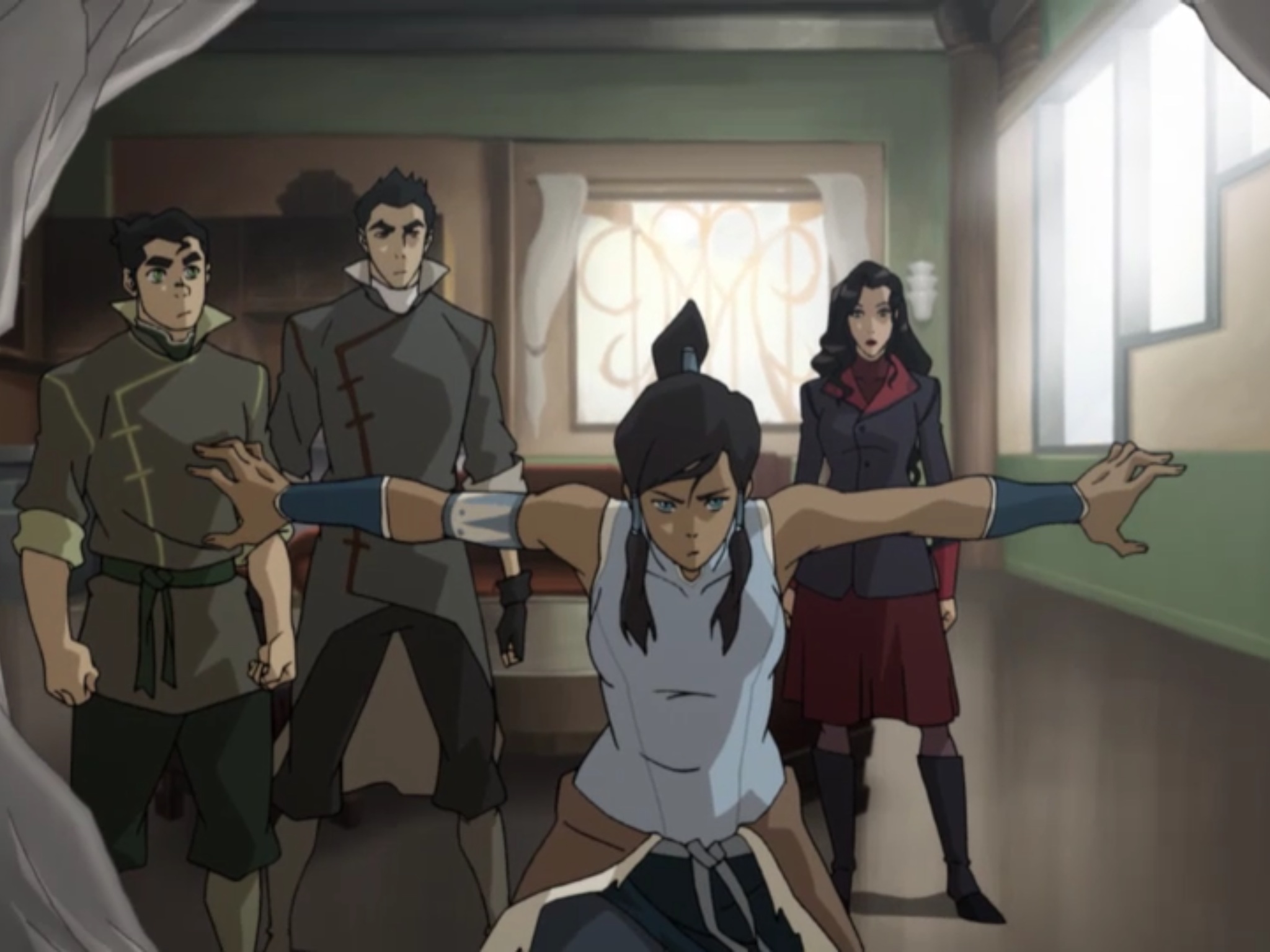 The Metal Clan is far less action packed as its purpose is to set up the city of Zaofu. This huge metal lotus of a city is the most creative location we’ve seen in Avatar arguably since Ba Sing Se was first introduced.  The city is an enlightened earthbending paradise where people hone the many different aspects of the element.  Some train in architecture while others master metal-dancing.  One man practices Toph’s earthbending-lie-detector technique and uses it to be a Truth Seer.

We learn a bit about Lin’s past when we’re introduced to her sister, Suyin.  Well, half-sister.  A surprise to no one, Toph got around a bit in her youth.  Neither knew their fathers and though they were given complete freedom, both fought for their mother’s attention.  Lin followed in her footsteps by becoming chief of police while Suyin went on a journey of self-discovery.  She became a pirate, a circus performer, and even a sandbender in a commune before realizing what she was looking for.  She yearned for the family and home she never had growing up.  She met an architect and built Zaofu, then married him and had five kids.

One of the children, Opal recently became an airbender which is the impetus for team Avatar’s visit.  Lin doesn’t want to reconnect with her sister for reasons I’m sure she’ll show in flashbacks later on.  Another awkward, poorly-conceived romance blooms.  This one is between Opal and Bolin.  Bolin even says she isn’t really his type and the girl is as milquetoast as they come so I don’t see it going anywhere.  Zaheer in disguise infiltrates Meelo’s airbending academy leading to some great humor and suspense.  The new shaved look also seems to match his voice a bit better though I still haven’t fallen in love with it.  Again, not much plot, but ton of set-up for the next episode. 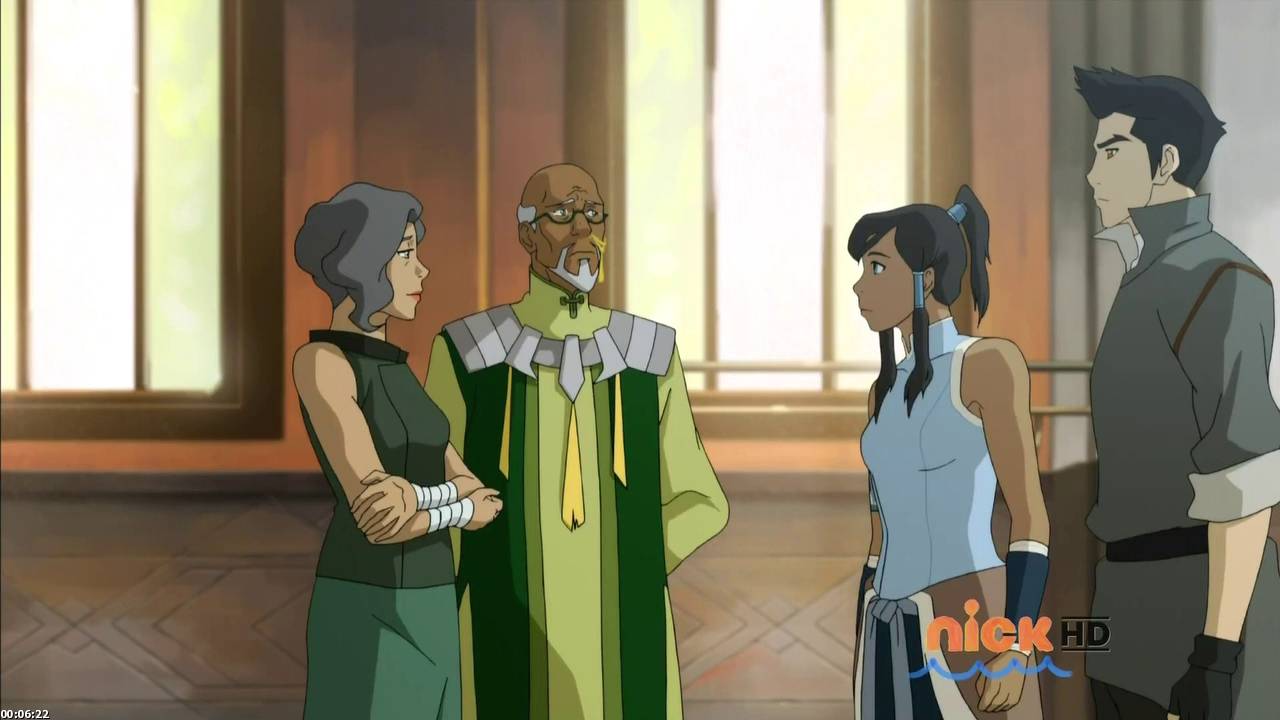 Another really entertaining couple of episodes.  The writing seems to have dropped a bit with a few awkward lines creeping in, but the jokes are still pretty funny and all the characters get something to do.  The worst parts of both episodes are the shoehorned romances.  Jinora and Kai have chemistry but an all out romance feels out of the blue.  Bolin and Opal don’t even have that.  The two pairings add very little and don’t feel like they’re going anywhere interesting.

What is interesting is how fast they ditched Ba Sing Se.  While I wouldn’t want to spend half the season there, I was hoping to learn about the queen’s plans for taking back the colonies.  They might return to it later, but it’s not like Avatar or Korra to introduce a plot, resolve it, and then reintroduce it later.  We’ll have to keep watching to see where they plan on taking it.

The characters have some nice development here, especially Lin.  We get so much more insight into why she’s so serious and humorless.  Kai has a quick redemption where he apologizes for stealing but Mako still doesn’t trust him and it would be very easy for him to relapse again.  The main cast isn’t developed much here but none act out of character so there’s room for more development in the future.  Of note is Korra’s complete lack of fear of Zaheer, showing she feels confident in her role as the Avatar.

Though not as strong as the first three episodes, these still hold up and leave me wanting more which is more than we could say for season two.   Nickelodeon’s airing schedule seems nonsensical though.  The first episode is a direct conclusion to episode three and the second is clearly a set-up episode.  The whole season seems to have a natural two-episode block structure but the three-episode premiere threw us off track.  Hopefully the season will find some way to restore itself into balance.