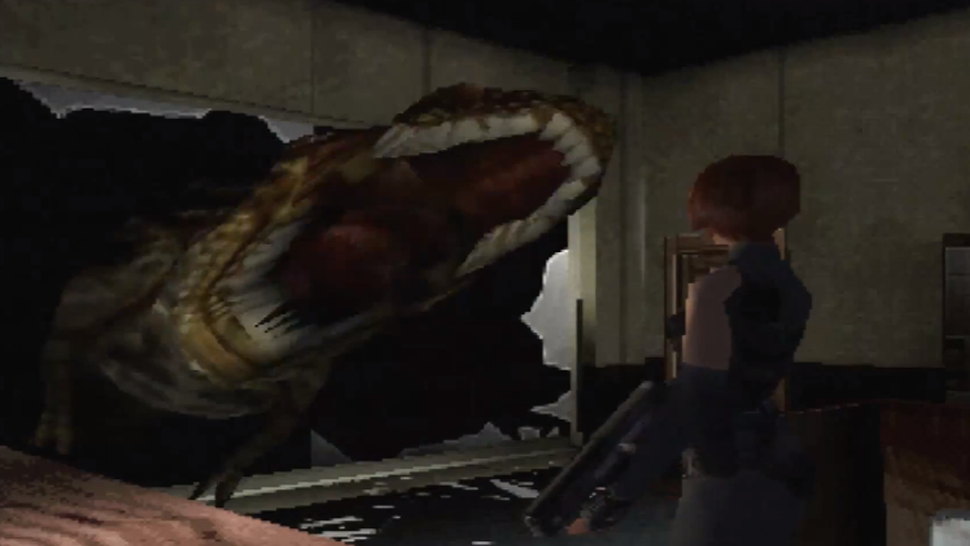 As its name suggests, Dino Crisis featured dinosaurs as the game’s enemies. The first entry, which was released in 1999, introduced games to Regina, a sassy weapons expert who would act as the series’s primary protagonist. She, along with teammates Rick and Gail, were dispatched to the mysterious Ibis Island to infiltrate the research facility thereon in search of Dr. Edward Kirk, an eccentric scientist who’d supposedly died during one of his experiments three years prior. As it turned out, Kirk had opened a time portal via one of his experiments—a time portal that connected the present with its Mesozoic past self. To quote another dino-oriented title, Dino Crisis was “an adventure 65 million years in the making.”

Considering how well the quintessential survival horror gameplay formula (which was comprised of fixed camera angles, tank controls, and narrow hallways) worked for Resident Evil, it is little wonder why CAPCOM more or less recycled it for Dino Crisis. To keep things from feeling too much like Resident Evil, though, a couple of “adjustments” were made to the formula, including storing items in different item boxes according to usage, implementing a mind-versus-muscle Choose-Your-Own-Adventure path option system, and utilizing various force fields throughout the complex to open paths and cage enemies. Though these “adjustments” did significantly up the game’s difficulty level, they also helped the game establish an identity more dignifying than “Resident Evil with dinosaurs” and provided survival horror enthusiasts who’d long since mastered the formula with a new challenge. Plus, the game’s low-budget, 1950s sci-fi film-vibe and quirky characters made its cheesy story too much fun not to enjoy.

Dino Crisis received two sequels. First, there was 2000’s Dino Crisis 2, which tossed the survival horror elements in favor of a more “dino hunter” style of gameplay and saw Regina return with newcomer Dylan in tow. This sequel followed the two as they sought to unravel the mystery behind a time portal that had opened and swallowed the fictitious Edward City, transporting the metropolis and all of its inhabitants back in time. Second and (unfortunately last) came 2003’s Dino Crisis 3, which took place in outer space and featured monsters created from altered dino DNA. Needless to say, this third entry failed to generate the buzz or sales of the previous two titles, and as a result, CAPCOM set the series on the Shelf of Forgotten Franchises.

But the series’s underground following remains strong. Recently, rumor of a reboot began circulating through various gaming and social media sites. There’s no word yet on whether or not this rumor holds any validity, but we’re keeping our fingers (tightly) crossed that it does.