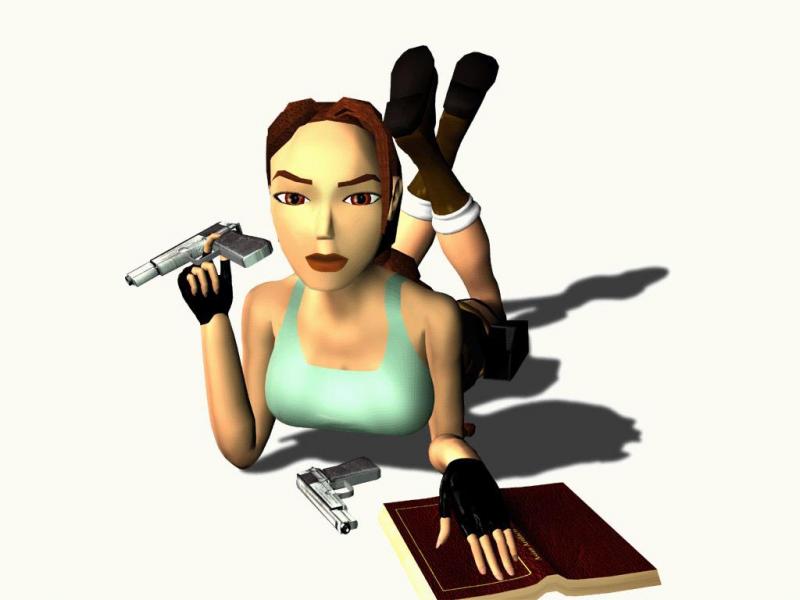 She runs, she shoots, she dives she saves the world—and through it all, she always manages to look fly! Over the years, Tomb Raider star Lara Croft has donned some pretty (and pretty interesting) outfits—but when you’re as rockin’ as this popular game heroine, you could go out (or swing out?) in your Pjs and still look stylin’. Below is a list of the five most memorable outfits in Lady Croft’s extensive wardrobe:

This outfit of Lady Croft’s was pretty much a blue camo incarnation of the one that she worn in the training levels of Tomb Raiders I through III. It consisted of a cropped halter top, hot pants, and hiking boots, and it looked both hot and cool (for different reasons) amid the warm oranges and yellows of the blistering-hot Nevada desert. But probably the most memorable aspect of this outfit is that it’s the one that Lara was wearing when she performed a death-defying leap (via quad bike, no less!) over a tall electric fence into top-secret government territory and subsequently hopped a transport truck to the infamous Area 51.

A new games mean new duds for Ms. Croft, and this outfit’s grungy design matched the dark tone of 2013’s Tomb Raider reboot. It consisted of khaki cargo pants, brown hiking boots, and teal tank top pulled over a white one—an obvious reference to the original outfit that Ms. Croft work way back in 1996’s Tomb Raider—accessorized by a simple necklace and hoop earrings. The most memorable feature of this outfit, though, was how it stained and ripped as Lara traversed the jungles and caves of Yamatai—especially when she had to wade through a river of bloody water, staining her red from head to toe.

Legend did not mark the first time that Lara dressed to impress in a classy number (she donned a navy blue strapless piece in Tomb Raider: Chronicles as well a white sundress in Simon West’s Tomb Raider movie), but it did mark the first time that players could control her while all dressed up in her Sunday best. The occasion was a meeting with businessman Shogo Takamoto, a businessman who possessed a piece of the legendary sword Excalibur. Sadly, this beautiful black number didn’t survive the evening; Lara had to make a few crude adjustments to it when Takamoto’s gun-wielding thugs crashed the party.

One of the most memorable moments in the original Tomb Raider and its remake Tomb Raider: Anniversary is the inclusion of a statue of Midas, a fabled king who turned everything that he touched into gold, whose broken-off—and climbable—hand possessed the same power as its inspiration. Most Raider players game-overed many a time just to watch a Lara become an Oscar (a gold status, that is) when she climbed onto the hand and consequently died. (In fact, Tomb Raider‘s original developer, CORE Design, placed a reload crystal in the same room as the statue, most likely for the convenience of reloading without the annoyance of having to hot-foot it all the way back to the room.) Given the sequence’s popularity, it seems only right that current Raider developer Crystal Dynamics pay homage to it with this equally memorable look, which consists only of the mod used during Anniversary‘s “Lara-to-Oscar” sequence when Lady Croft is completely gold.

This is the one that started it all. With the exception of the outfit that she wore in the training level and a few outfits seen in the end-game credits, Lara wears this outfit—which consists of her famous light teal tank top, khaki shorts, and brown hiking boots—throughout the entirety of the game. So great an impression this outfit made on fans that it has been featured in or else inspired nearly every outfit in all subsequent Tomb Raider titles. When the world thinks of Lara or her hit franchise, it thinks of this outfit. Its Anniversary incarnation is called “Classic,” and for good reason: it’s classic Lara, classic Tomb Raider, and the most well-known and beloved outfit in Lady Croft’s closet.

5 Sci-Fi Gadgets We Wish Were Real