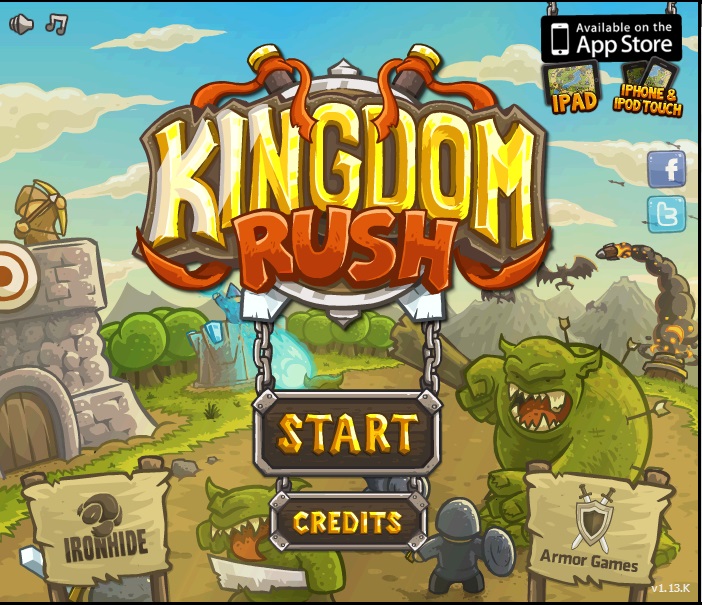 Finding free flash games that are equal parts awesome, fun, and time-consuming is tough. Luckily, Geek Insider is here to help you find the best, the funny, and the so-bad-it’s-awesome games of the internet.

With that, let’s check out:

Where Can It Be Found

This game can be found on Kongregate but is also on various hosting sites, like Newgrounds, as well.

It’s a simple tower defense with great graphics (for that type of game) and sound effects. My favorite are the funny battle cries of the various towers like “For the king!”, “Like a charm!”, “Want some? Get some!”, and “Dodge this!”

The game is simple: you are protecting the kingdom against various hordes of evil, intent on invading and taking over the peaceful realm. Each enemy has its own stats and weaknesses and you have to strategize to make sure you have the required towers needed to defeat them. The game is kept interesting by different path layout, different enemy line-ups, and the occasional giant robot or abominable snowman.

There are three difficulty modes, levels are always re-playable, and the game saves itself so you can quit and come back later without losing any data.

Each level has its own specific setup. There can be one or several entrances where the waves of monsters appear from. The game initially gives you some gold to build your first few towers, then you start the first wave yourself. The towers are only buildable on the predetermined lots along the paths.

There are four types of towers you can build and upgrade: the barracks, a mage tower, archery tower, and dwarven bombard. The barracks provide three soldiers that are used to slow and stop the enemies while the other towers provide the real firepower to kill them. The archers are pretty average but are essential for fast moving and flying monsters, wizards are key for enemies that have armour, while the artillery is useful for crowd control and high HP monsters.

All the towers have in-game upgrades. For example, archers can become snipers, the barracks can become holy knights, and the artillery cannon can become a Tesla X104. Each special upgrade comes with its own mini upgrades and strengths. This forces the player to plan what is really needed to win the game. Each level has a different combo of enemies that are sent in so each level needs a new strategy, which means the game never gets old.

You also get two abilities yourself: Reinforcements and the Rain of Fire. These have cool-down periods but can sometimes be the key to winning a game. They also have upgrade options on the main screen.

After each level, depending on your performance, you get one to three stars. These can be used for overall upgrades for your towers and special abilities, which are found in a bottom tab on the main screen. The game also includes an encyclopedia of enemies, a “hero” you can get for 15 stars, and achievement medals.

The heroes are characters that are controlled by the player within the level and have their own strengths and weaknesses. The achievement medals range from a medal for sending in enemy waves early for a whole level to clicking on a jumping fish in one of the earlier levels.

What Makes It Stand Out?

One of my favorites things about this game are the little details. If you click enough on one of the sheep (which are usually relaxing in the green fields as your soldiers battle to their deaths), it will eventually explode, which I can only assume is a tribute to Blizzard. Other little details include special level surprises like an elf training house, a sun-ray wizard tower, and a Bigfoot monster that can join your forces to fight for good.

On top of that, after you’ve passed a level, two options open up for if you decide to go back and replay it: the Heroic Challenge and the Iron Challenge. These challenges vary by level and have certain limitations and special waves to offer even more fun after you’ve finished the regular levels.

Of course, there is “Premium Content” that can be bought, which includes extra heroes, spells, and stars. Originally, this game was completely free but it become very popular so the creators added the heroes, along with the Premium Content.

However, this isn’t really a problem since the Premium Content is not needed to enjoy or complete the game. In fact, I played the entire game without even having a Hero since I chose to use those stars for upgrades instead.

Overall, this game is definitely a fun game to kill your boredom. Between the unique levels, customizable towers, and hilarious battle cries, you’re sure to get addicted.