Felicia Day, along with Touchstone Books, announced she has written a book. A memoir, in fact, called You’re Never Weird On The Internet (Almost). A memoir I can’t wait to read. Ever wonder what Nathan Fillion smells like? Or if Wil Wheaton is an over or under guy when it comes to toilet paper? Well, you’ll probably have to continue wondering those things because it’s highly unlikely you’ll find them in Day’s book.

So What Is This Book About Exactly?

You can, however, expect to find stories of Day’s unique homeschooled upbringing in southern America, her adventures in Hollywood – from starting out as an actress to creating her own production company – and much more about the many roles she’s taken on throughout her life – actress, writer, producer, musician, entrepreneur. Is there anything this overachieving queen of all things geek can’t do?

Day has informed members of her Goodreads book club, Vaginal Fantasy, that there will be lots of behind the scenes info on her web series The Guild. As a former World of Warcraft addict, myself, it will be interesting to learn more about how Day overcame her own addiction and then went on to form it into a hit web series.

The book also carries a strong message for its readers: “everyone should embrace what makes them different and be brave enough to share it with the world, because anything is possible now – even for a digital misfit.” 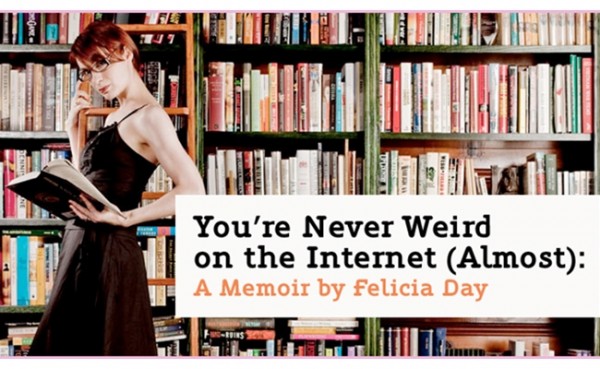 Felicia Day is no newb when it comes to writing. She’s written for her web series The Guild, as well as Geek and Sundry. She’s even written graphic novels based on The Guild web series. You’re Never Weird On The Internet (Almost) will be her first novel length work published, which is no small feat. But if the geek goddess’s prior accomplishments are any indication of the books success, then her memoir will be nothing but brilliant and entertaining.

At 35 years of age, some may wonder why Day has decided to write her memoir when there are sure to be more future endeavors and accomplishments. She does somewhat address this matter in her official announcement, and you can watch that here.

Day’s book is set to release August 2015 and is currently available for preorder through her website. The book has already hit the top 100 list for Amazon books in the memoirs genre, and surprisingly #7 for the scientist category. Felicia Day is a lot of things, but she is not a scientist; however, she did play one on TV.