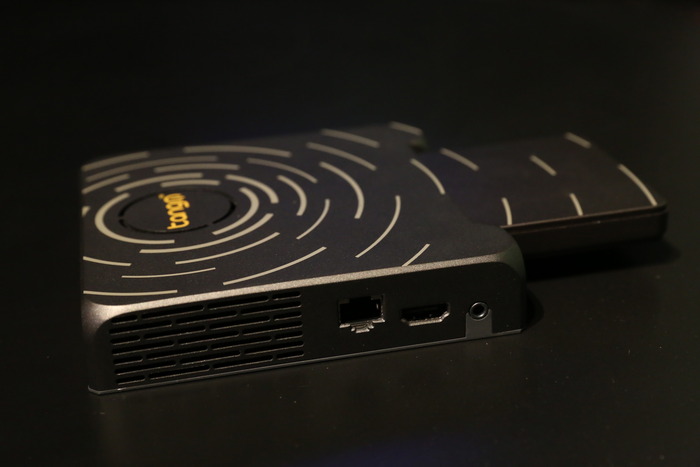 The Tango Super PC is a complete PC tower in a package the size of a typical external hard drive. It is meant to be used as a portable computer and gaming system in one- allowing work and home computers, along with gaming consoles can be all in one place and easy to carry. One big plus to the Tango system is being able to save money buying software and hardware multiple times, and saving time transferring documents and carrying around external memory devices.

At just 125mm x 80mm x 13.5 mm and weighing in at 200 grams, the Tango is a super portable computer that can run any operating system that can normally be run on a PC. Users can also customize easily, Tango can come apart by removing two screws and any size SSD can be installed. It will include a docking station, Wi-Fi USB dongle, BT dongle, carrying case with a clip, and a Display Port to HDMI adapter cable. Tango will have a one year warranty and be available with options of 32 or 128GB SSD, 4 or 8GB of RAM and have Windows 7 Premium or Home premium & already installed, starting at $349 for Kickstarter backers. Distribution for backers will begin in August according to the current Kickstarter plan, which ends on July 11th, 2014.

The KOR-FX Gaming Vest provides haptic feedback from video games to the user through an audio output dongle that wirelessly sends environmental information to the vest. The haptic feedback is created using 4DFX technology, allowing the feedback to be very specific in respect to which audio triggers certain motions. According to the Kickstarter page the feedback can be as specific as being able to detect “your enemy’s vehicle approaching or detect which direction a sniper is firing from.”

The vest is highly customizable to maximize the experience for any type of game, and it also comes with four preset custom settings that can be toggled with the touch of a button. The vest wil also have updatable technology and require no software to use efficiently. It can also be used while watching movies, listening to music, and in combination with some virtual reality gaming technology to complete the experience.

The Kickstarter for the Kor-FX vest ends July 24th, 2014; the lowest pledge that will still earn the backer a vest was at $135, though those are unavailable now. The next pledge earning a vest as a backer is $150, and all vests for backers are set to be delivered in September 2014.