Facebook is now taking signups for a new program that it calls Facebook for Android. The program utilizes Google Play’s beta system to let Facebook allow users to test pre-release versions of its app for testing and feedback. 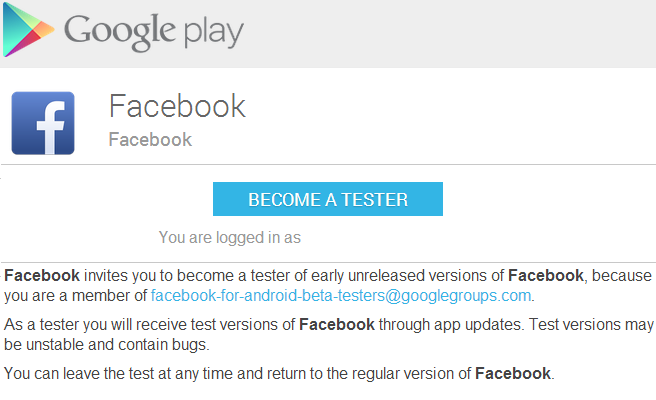 The Facebook for Android program is open for everyone. Upon joining, users will get a small batch of fixes and features every month. They are expected to use the app as they normally would. They should then submit reports whenever they encounter an error or bug. Other feedback, such as those relating to stability or performance of the app, can also be given.

Additionally, Facebook has created an online group to facilitate discussions and share updates. Here’s how you join the Beta program:

The Android beta program will give users who opt-in access to the latest versions of Facebook for Android before the general release. Our goals with this program are to expand our pool of testers and gain feedback across a more diverse set of devices. Beta testers will be able to help us improve performance on a wide variety of Android devices we may have otherwise been unable to test at scale.

This isn’t the first time Facebook is using Google’s services to test its products. Facebook has consistently favored Android for its open and developer-friendly nature in the past as well. It recently released the Facebook Home application along with the HTC First. A Facebook app has also hit Google Glass.

Android’s openness, reach, and diversity create enormous opportunities for developers. At Facebook, we’ve been able to utilize Android’s flexibility to innovate in ways that aren’t possible on other platforms. The openness of Android has allowed us to innovate and build awesome products like Home and features like Chat Heads. We are in the early days of Google’s beta program, but we’re excited to work on extending our testing coverage

Facebook had been earlier using another beta system on Android to test its apps. But it was shut down by Google in favor of this new system, which was launched at Google I/O last month.

Saints Row 4 and State of Decay Refused Classification in Australia