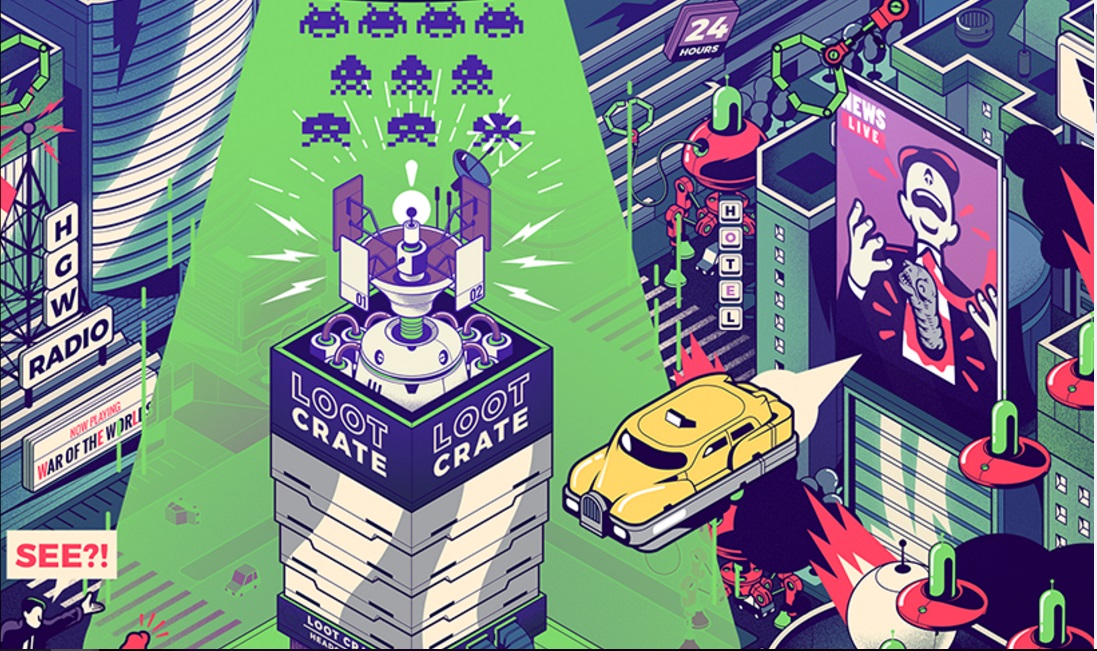 I don’t know what I was expecting for this month’s Loot Crate but my mind was blown! The theme was Invasion and featured some pretty amazing loot – This has been the best Loot Crate yet of the year (bad um TSH!). But seriously, just take a look at how much the quality of the pin has improved: 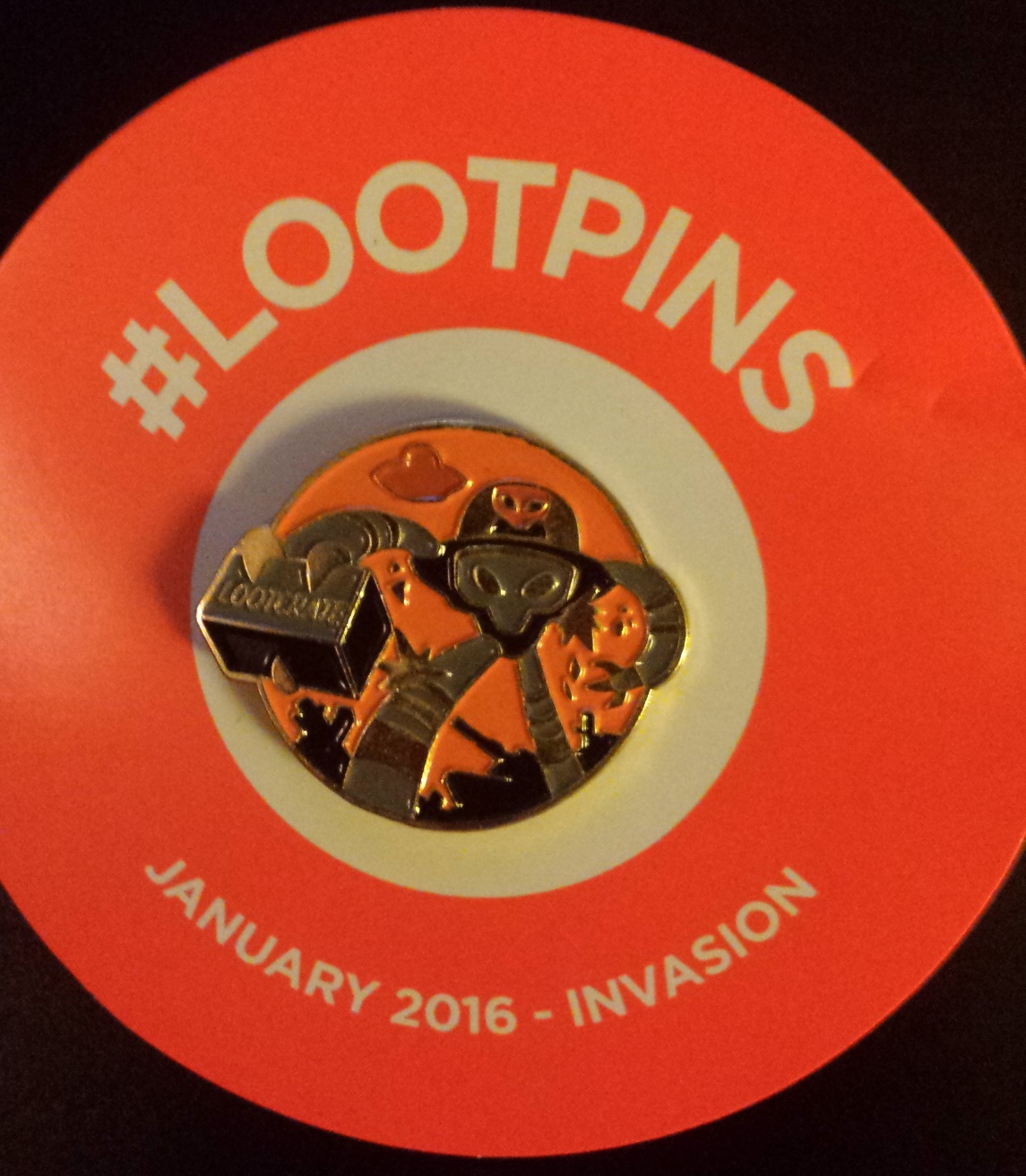 It looks so much cooler than the old, plainer style. Not only that but the LC Magazine was made of thicker paper, with more content like an X-Files­ crossword and a “How To” on surviving an alien invasion with such tips as avoid monuments and sneeze often. 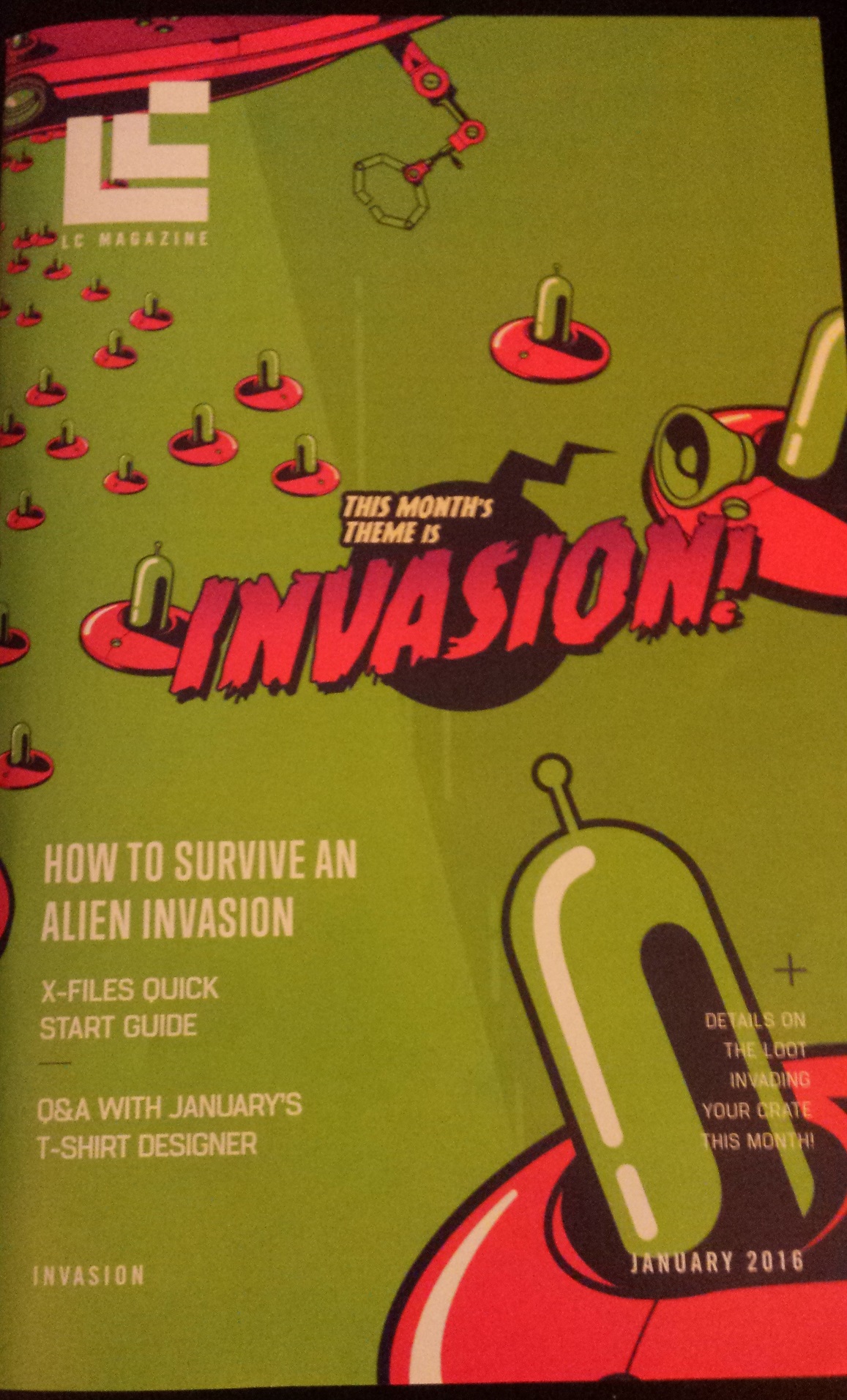 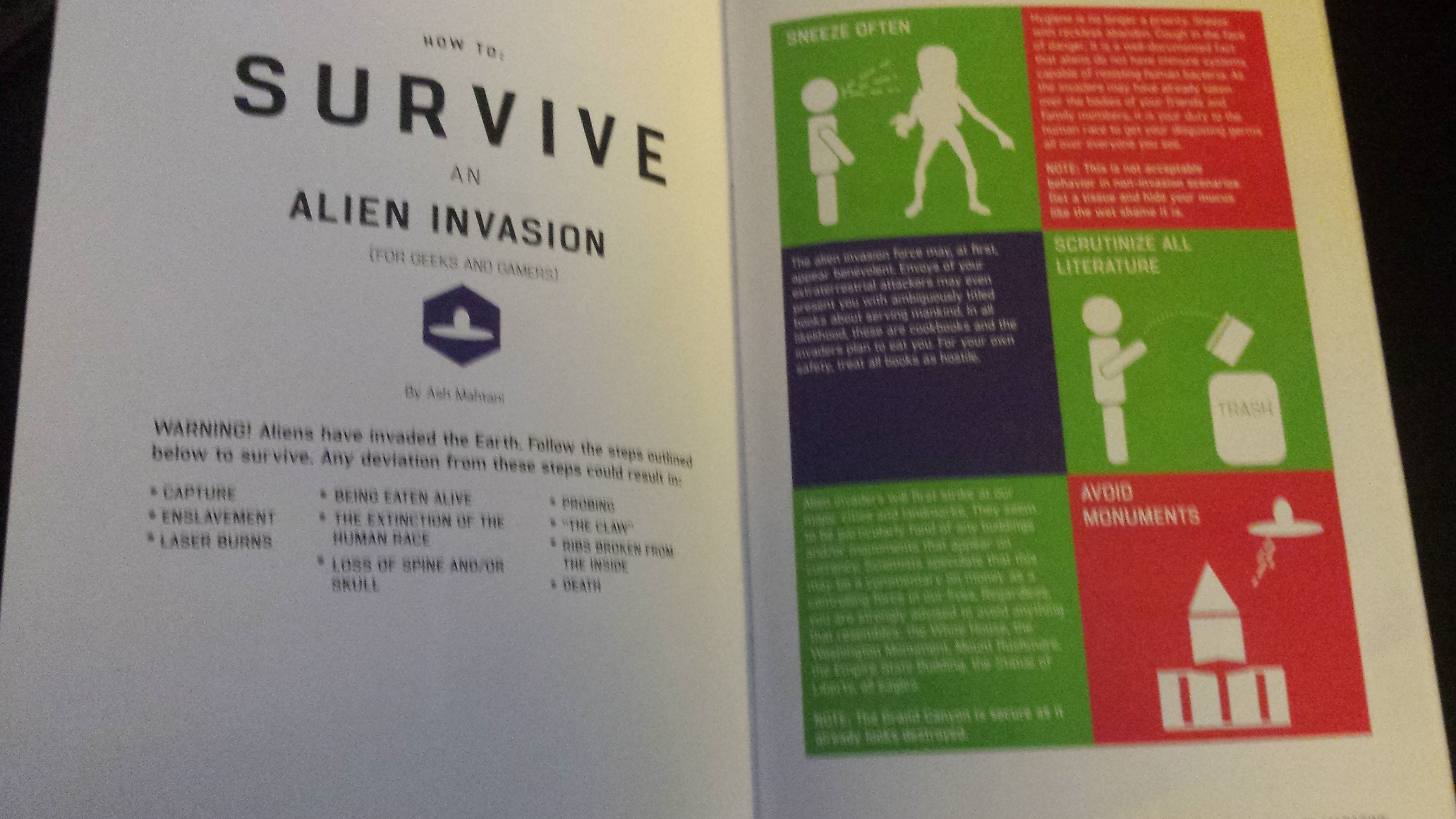 Fun fact: from now on, in every Loot Crate, there will be a secret word that you use to unlock exclusive downloadable content. I won’t spill this month’s word, if I managed to figure it out, you can! This month’s DLC was Letter 44: Issue 1. The comic features a story written by Charles Soule and art by Alberto Jimenez Alburquerque. 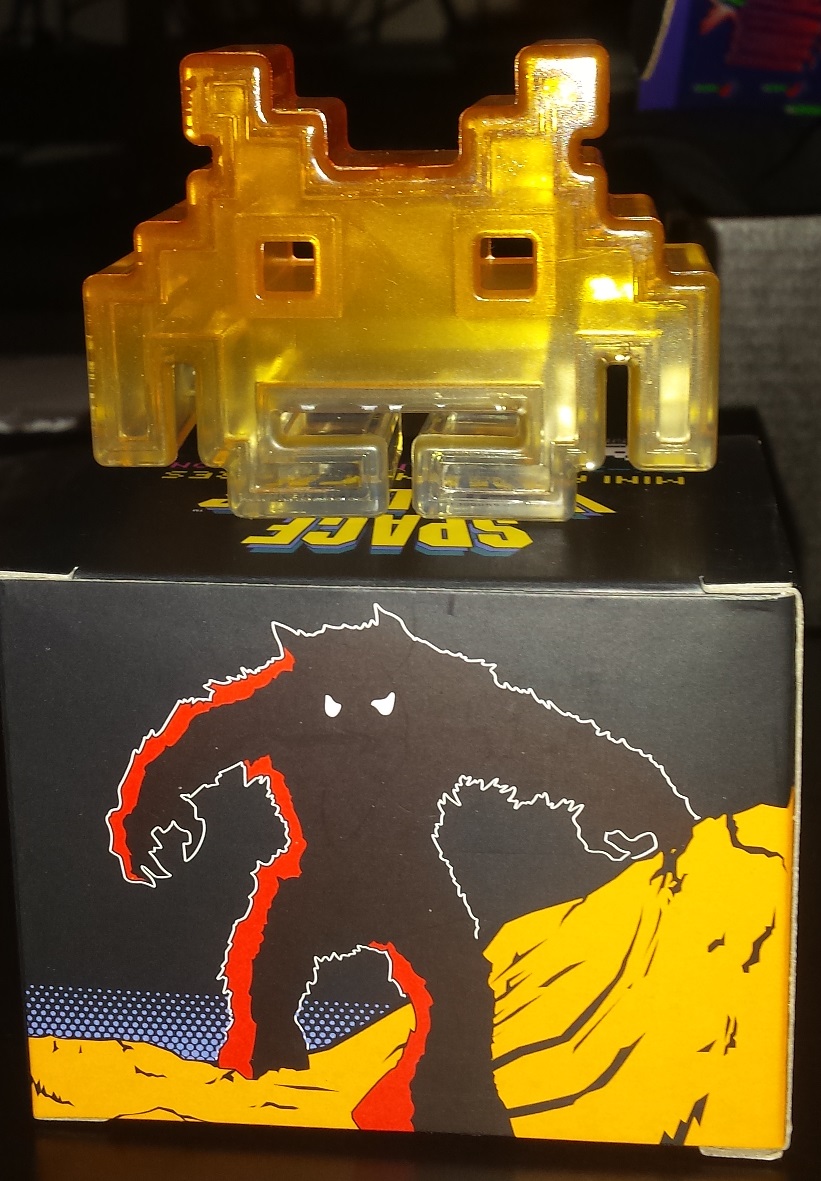 The crate starts off cute with this exclusive Space Invaders vinyl figure! Small and colourful – it’s sure to take over your home with cuteness! 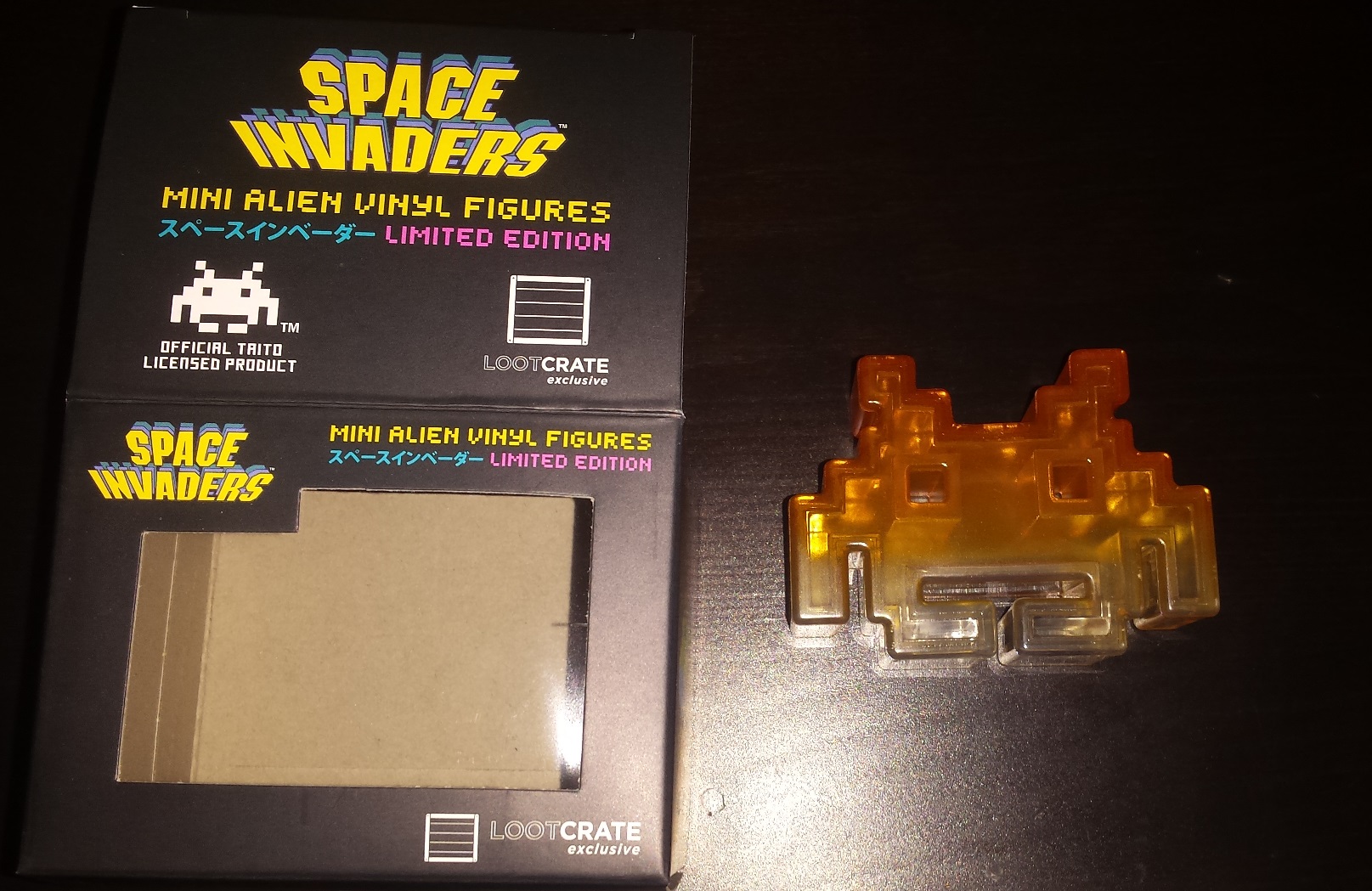 Look at those mini posters – they’re awesome and the perfect size for your locker or cubicle! The art prints are 9” x 6” and featured the 1653’s The War of the Worlds and 1951’s The Day the Earth Stood Still. 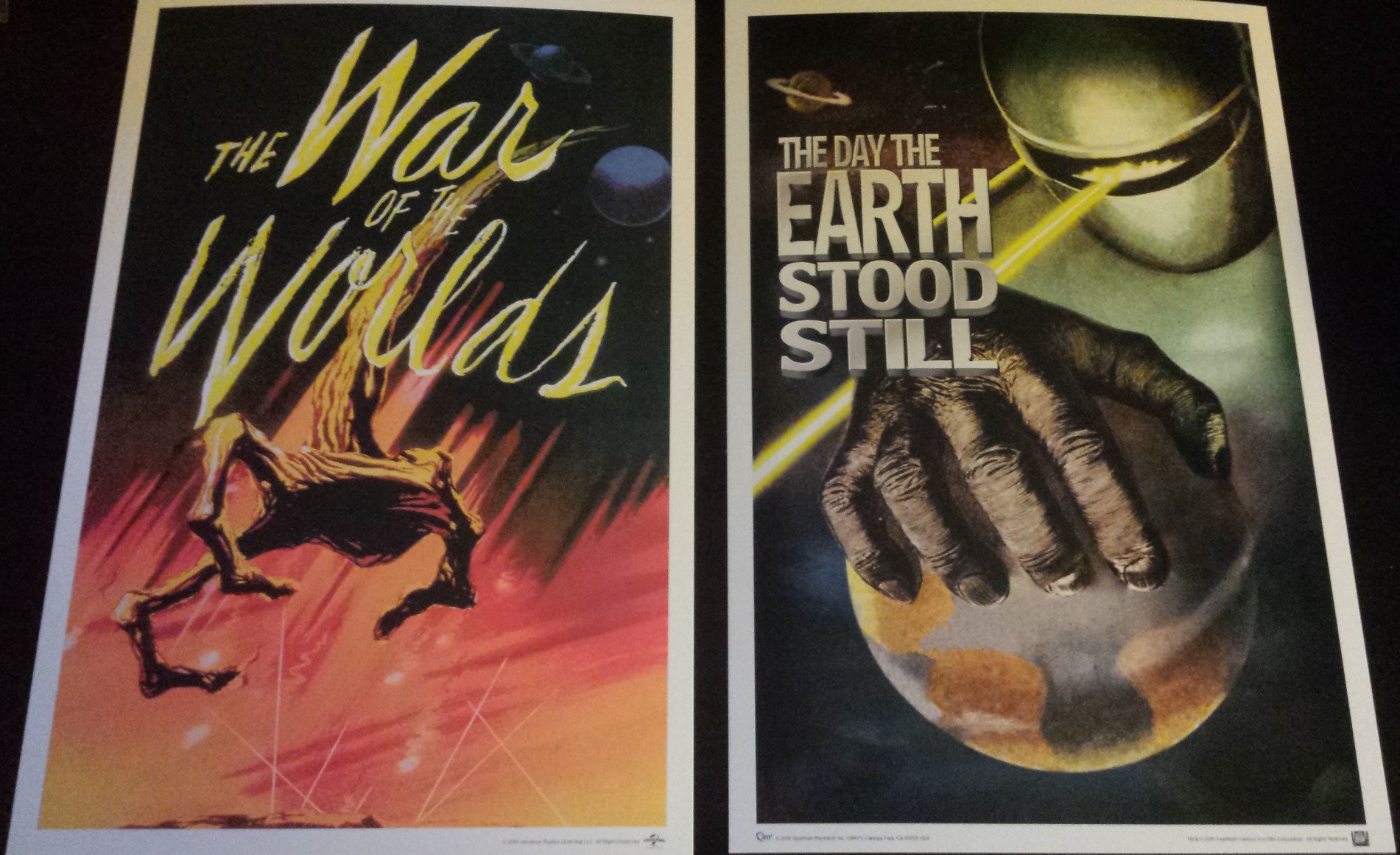 Now let’s take a step back and check verification. Do you have your MultiPass?

If you got in on this Loot Crate action, then you now have your very own officially licensed prop replica of Leeloo Dallas’ MultiPass from The Fifth Element. A neat feature is that you can remove the ID and put in your own, it comes with a plastic cover to make sure your driver’s license fits! 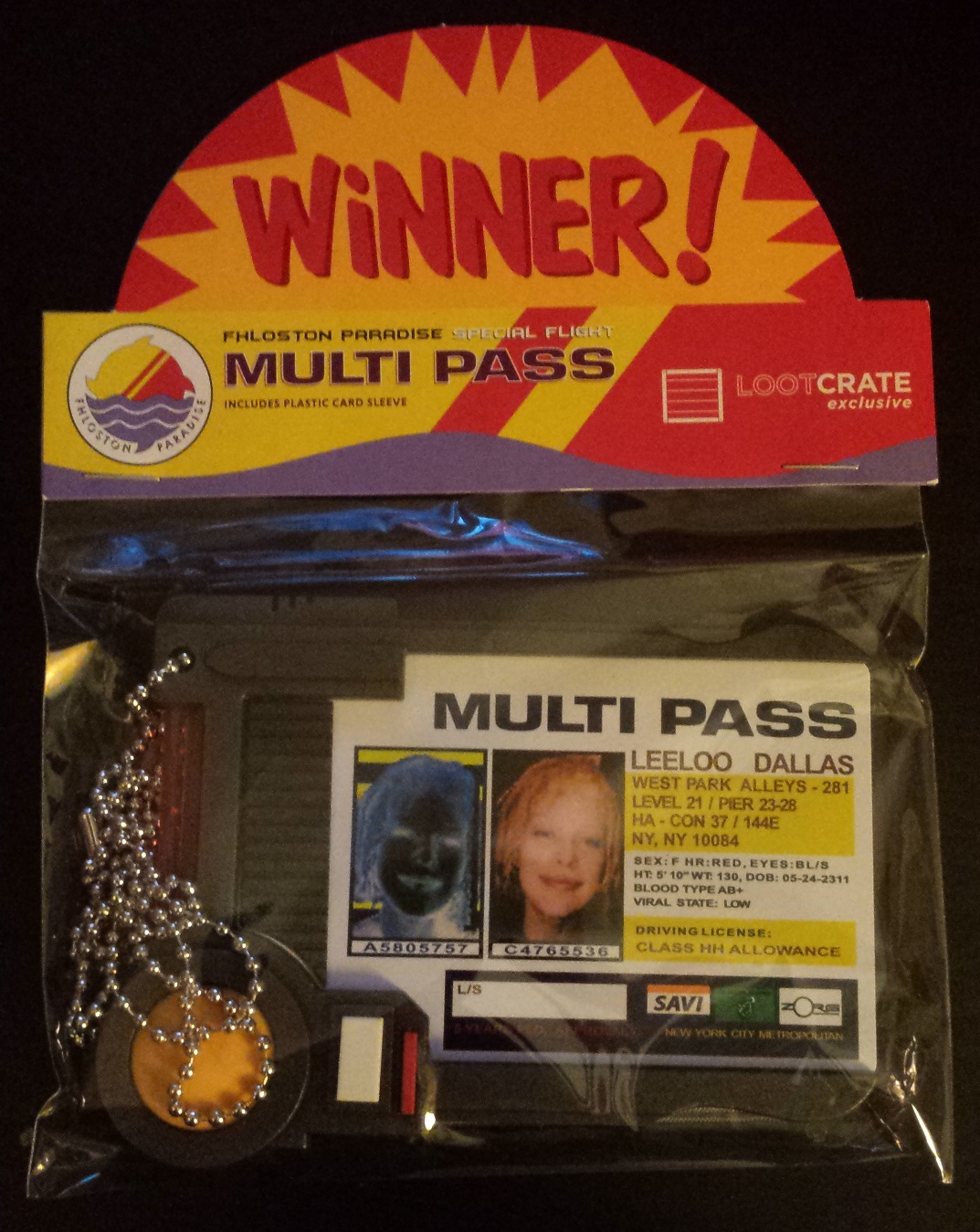 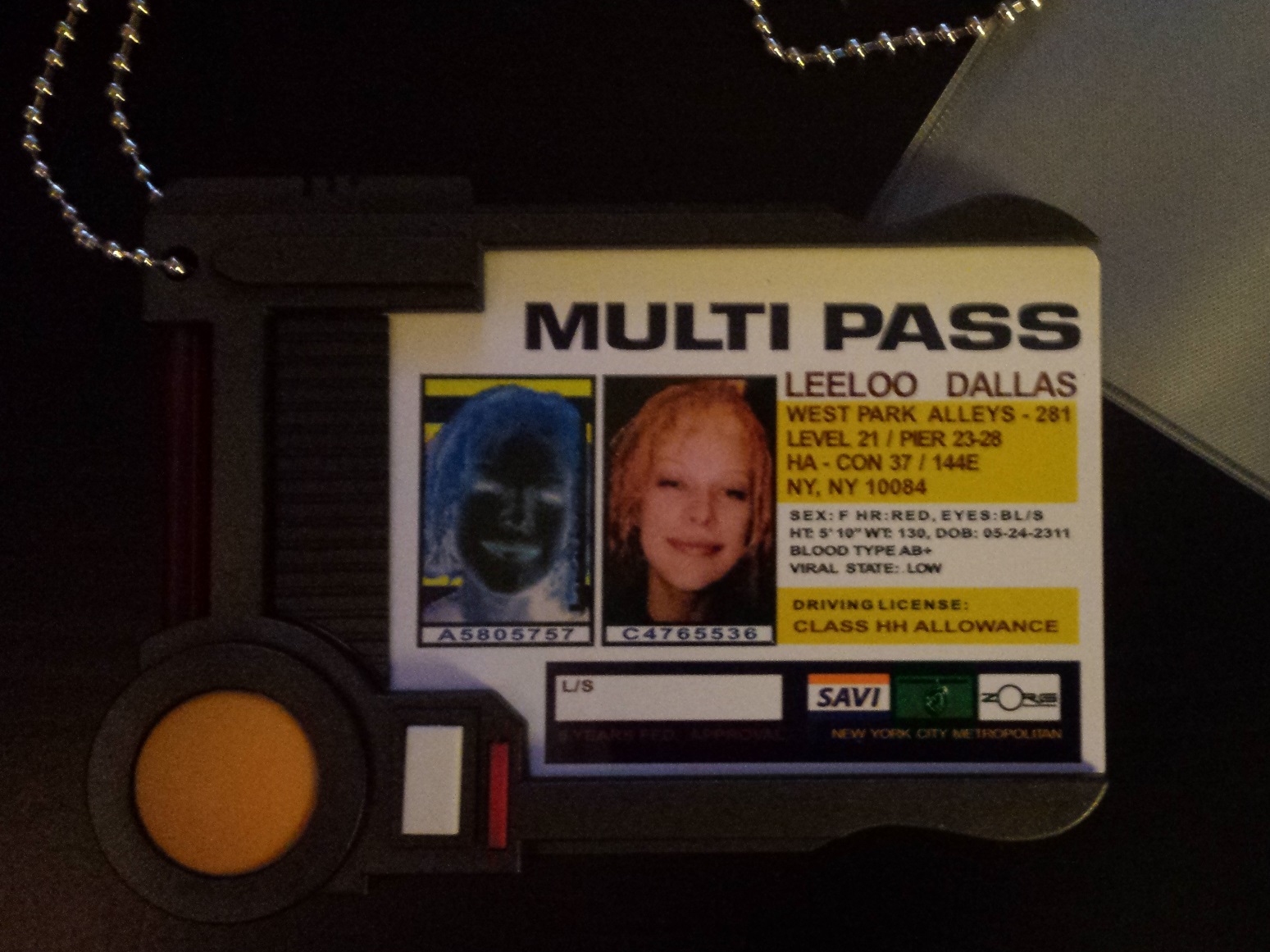 It Just Wants a Hug!

You’re in a newly discovered alien spaceship that was found crashed on a desert planet and you see this: 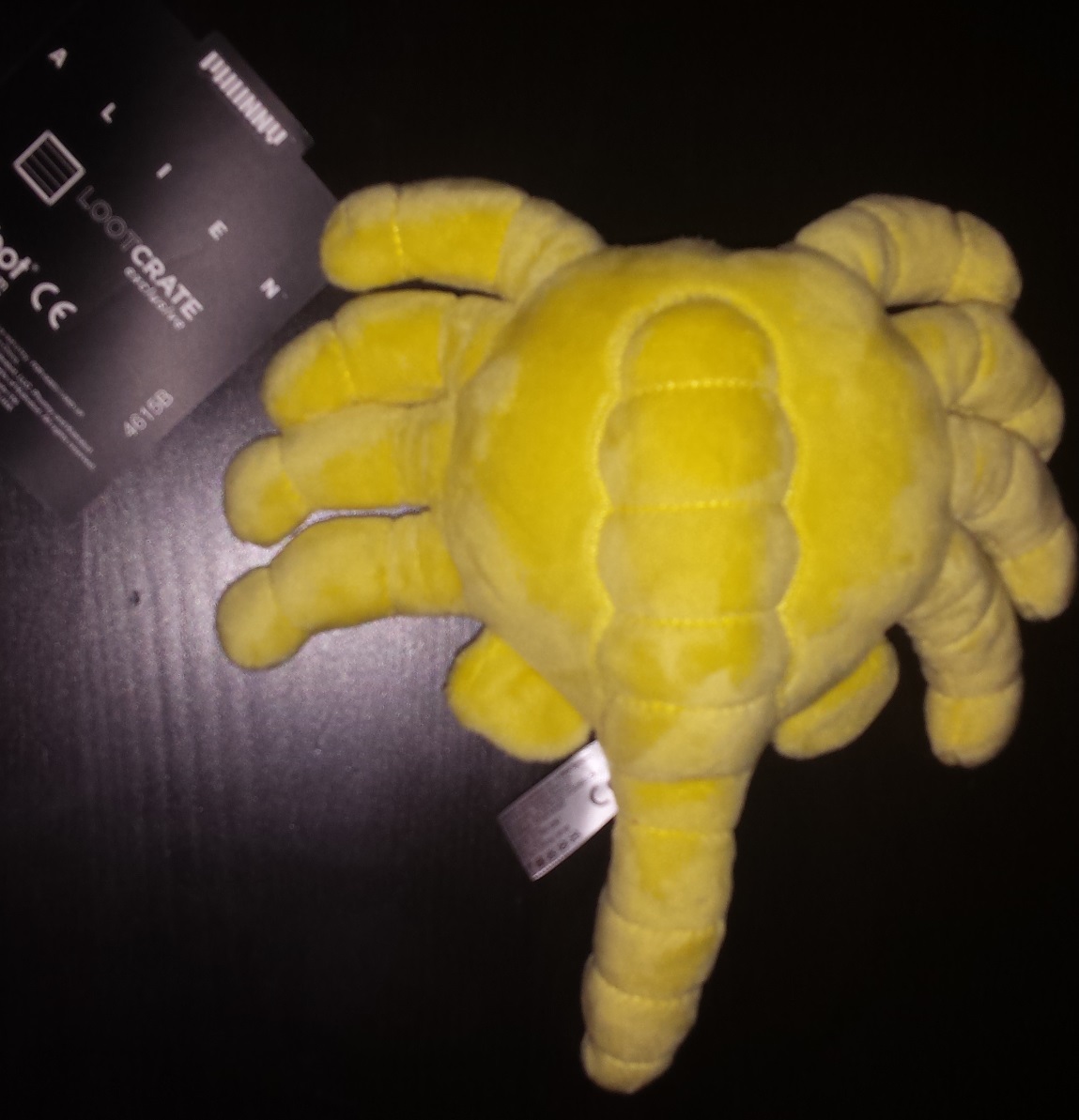 What could it be? Do you:

If you answered 3 then congrats, you are now pregnant with your very own Alien – your gender doesn’t matter – Aliens are equal opportunists! I mean just look at the little Face Hugger, who wouldn’t want to hug it? 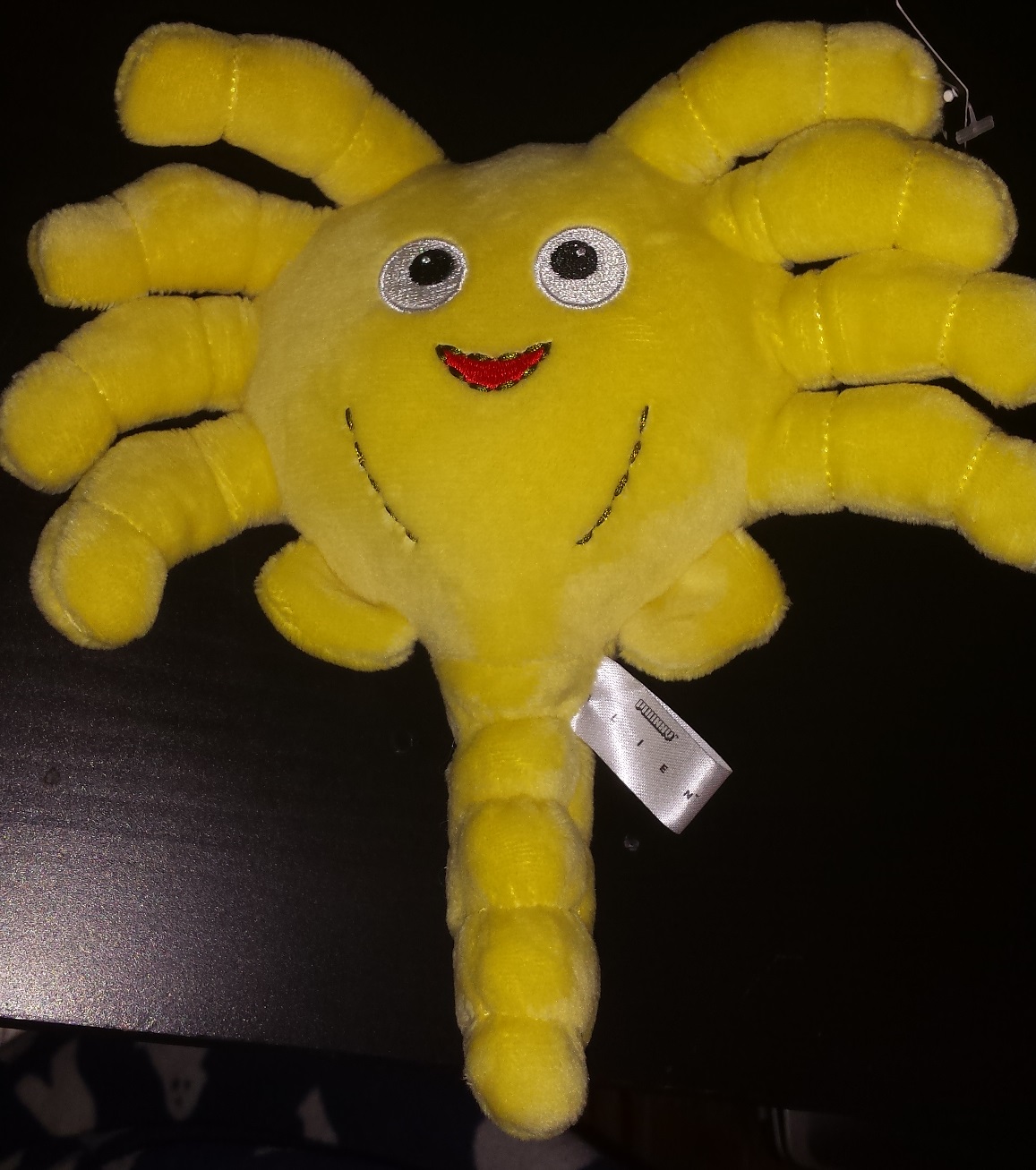 The Truth Is Out There

What’s the most important tool for an FBI agent hunting aliens and government conspiracies? A gun? Pshaw. It’s a flashlight! 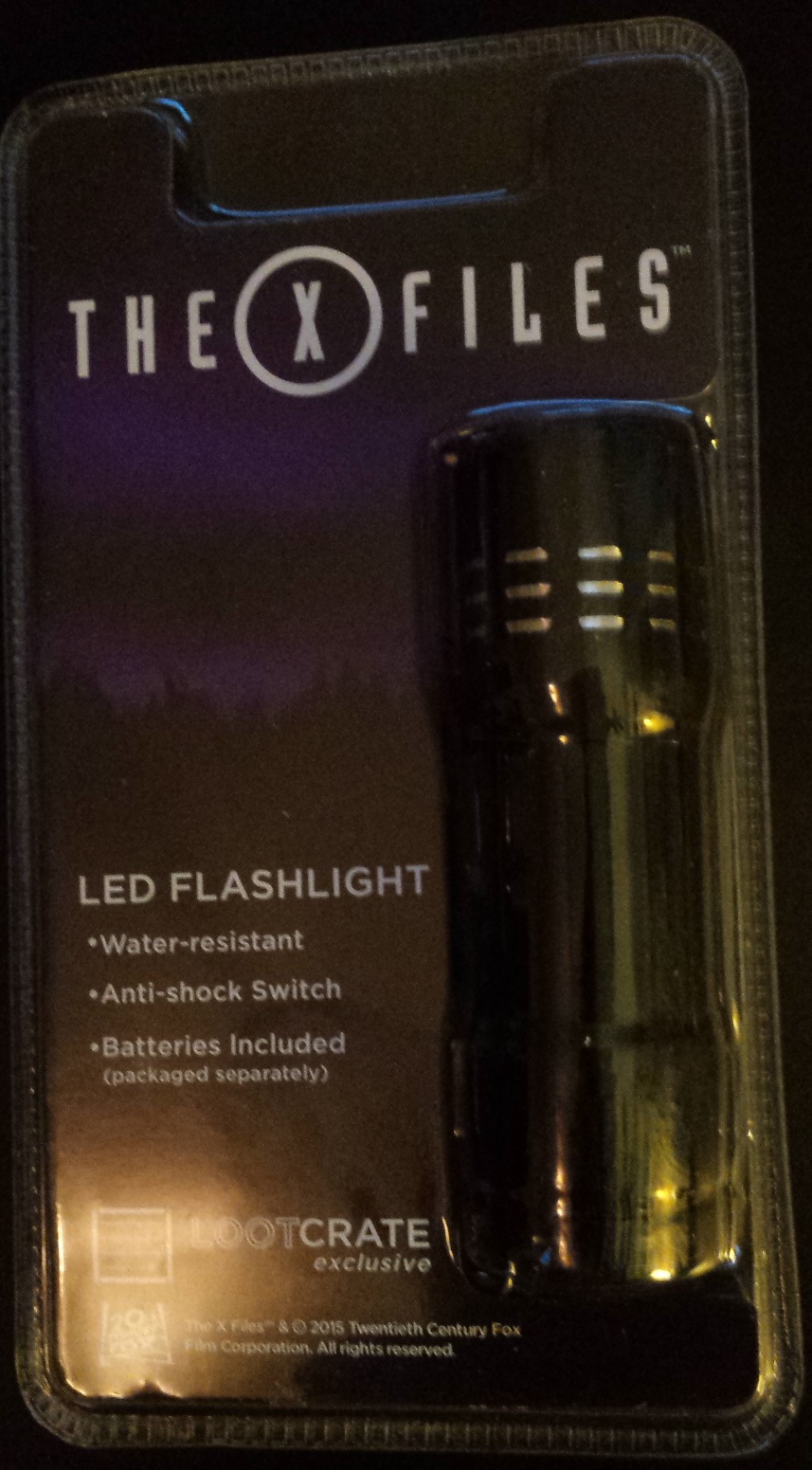 You can’t tell me that you didn’t noticed how often Dana Scully and Fox Mulder were in dank and dark places looking for evidence.

You can pick up a weapon almost anywhere, a 2×4, a pipe, a shoe… But you’re helpless without light! Not only is it LED but it is also water resistant with an anti-shock switch. Even better – it’s officially licensed!

Finally, the pièce de résistance – a 100% cotton t-shirt celebrating the return of The X-Files. This shirt was designed by an artist known as “nicebleed” as part of a design contest collaboration. And it’s incredibly comfy. 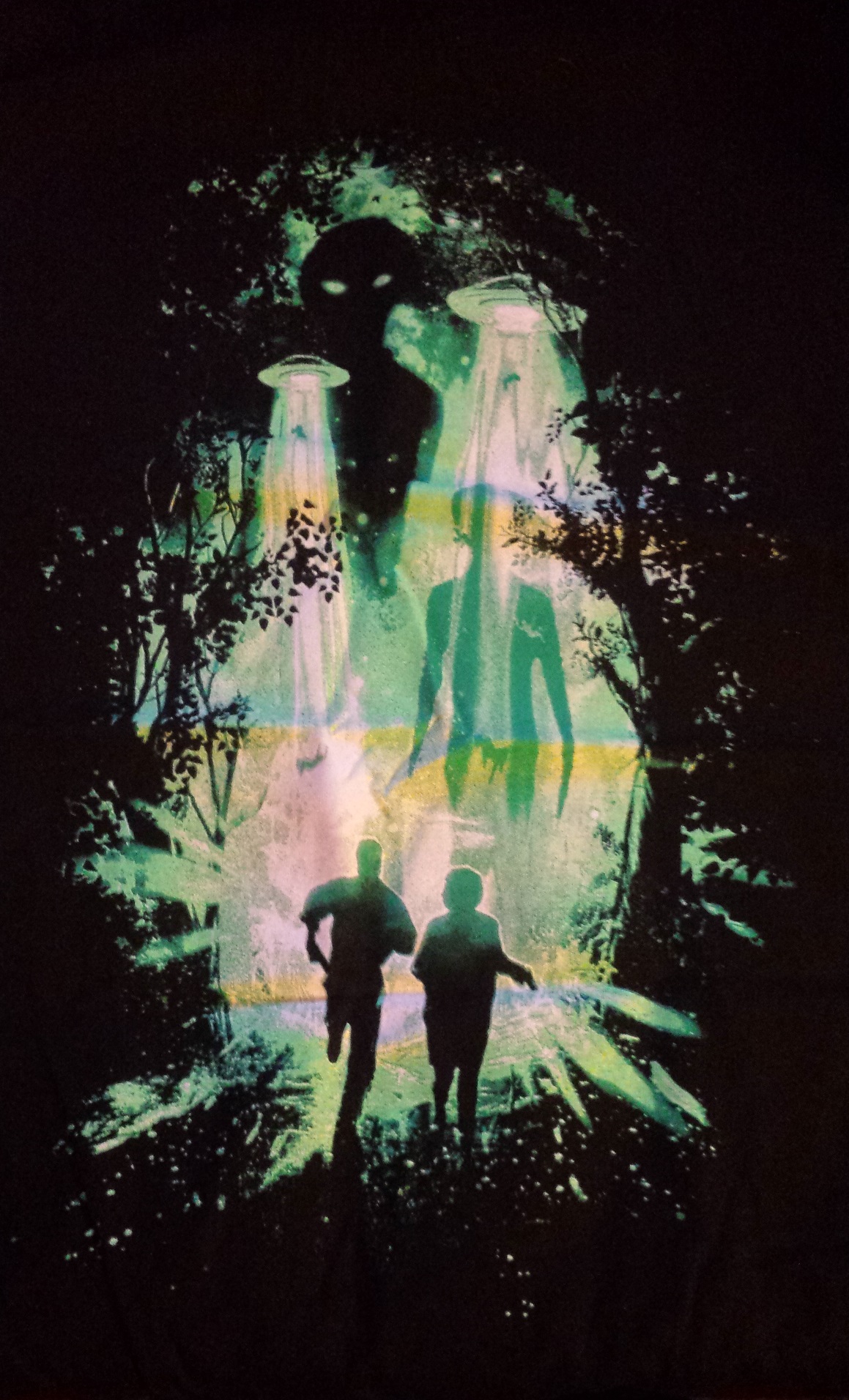 That’s all, folks. If you didn’t sign up for this month, you really missed out so make sure you sign up for February’s box while you still have time!

And remember: it is not always aliens (but maybe it is).