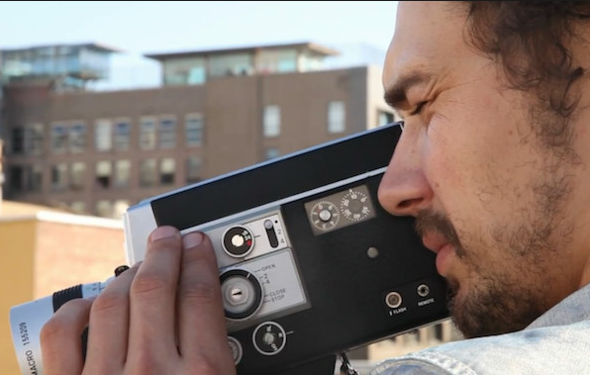 Two years ago, I convinced my mom to accompany me on a trip to New York City to watch James Franco as George, a migrant farmer, in the Broadway adaptation of John Steinbeck’s Of Mice and Men. I bought tickets, hopped on a plane and, before I knew it, sat way up in the balcony of Longacre Theatre waiting for the show to commence. As a person without 20/20 vision, who prefers glasses over contacts, I immediately shuffled through my purse and searched for my frames to deblur my view of the stage. To my luck, I left them back at the hotel. Although I could make out Franco’s silhouette, I had to rely on his voice, along with the voice of his fellow actors, to capture the essence of the play without paying so much attention to the subtle, yet revealing facial expressions. Recently, while reading James Franco’s Movie Column on IndieWire, I found myself in a comparable territory to that of watching (or listening) to Franco’s performance on Broadway. 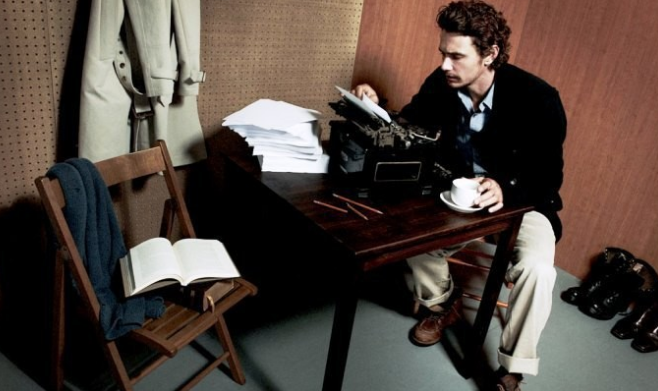 The 38-year-old actor, filmmaker, writer, and painter has led a successful artistic career on-screen and behind the camera. And while many great artists are acknowledged for their ability to completely immerse themselves in their endeavours of creativity, Franco manages to excel within his various mediums of expression while optimizing on a unique distance–a task that can very well be considered an art all in itself. But, just as I had to rely on my sense of hearing to decipher the scenes throughout Of Mice and Men, I had to switch gears while reading Franco’s movie column. Though, unlike the former, the latter was an unconscious adjustment while reading his piece on The Love Witch.

In his movie column, Franco writes about films in the form of a dialogue between himself and his reverse self, Semaj. As Franco puts it, “Rather than a conventional review, it is a place where James and Semaj can muse about ideas that the films provoke.” Instead of writing about a film, Franco lets the film divide, and even multiply, his thoughts and feelings about what he sees. Essentially, his reviews become much more than what he sees on-screen.

As he picks apart a film in a causal, free-floating way, he latches onto thoughts that bring him elsewhere, into a space that sometimes extends beyond the film itself. Franco addresses themes that a film provokes while simultaneously alluding to what a theme, or character, provokes in himself. In the same way he describes The Love Witch as a film that’s “very much about how things are said, rather than what is said,” Franco’s reviews are very much about how he’s writing, rather than what he’s writing about. Similarly, my experience of watching Franco on stage was very much about how his lines were said, rather than what was said, given that my visual comprehension was hindered. Although the introspective nature of his column is partly masked behind the films he talks about, the self-reflectiveness of his writing can’t be completely set aside. This isn’t to say that his reviews are all about his creative writing skills that lack film theory or thematic substance, because they have a lot of that. It’s simply to suggest that I noticed becoming distracted by his choice of writing style.

While my unexpected experience of watching Franco on Broadway wasn’t intended on his part, my experience reading his column was slightly different. His presentation of ideas are intentional, the form is conversational, and the subjective pull in and out of the film is a unique take on free association. Although I was hesitant to pursue the urge to go all Freudian on Franco, his writing style naturally pulled me there. Even though there’s a strong thread that keeps Franco on course, he and Semaj work as a mental process that gently explores Franco’s stream of consciousness, a process whereby ideas are spontaneously suggested, sometimes taking off while others reach a dead-end. But, if I’m really going to bring Freud into this, Franco’s thoughts that are abruptly cut off by Semaj – or vise versa – as redundant or disagreeable are all subject to displacement. Even when thoughts and ideas aren’t given much attention, they should – and still do – play a progressive role in Franco’s playful critique.

Either way, his unconventional review does a lot more than simply “muse” about movies. Aside from the entertaining quality of a neutral Jekyll & Hyde approach, Franco’s column is unconsciously literary and can be pulled apart, analyzed, and thought about just as he strips away layers of a film.

So, even if you haven’t watched the films the actor writes about (or you have, but you misplaced your glasses during the screening), you’ll thoroughly enjoy reading bits of the oscillating banter between him and himself.