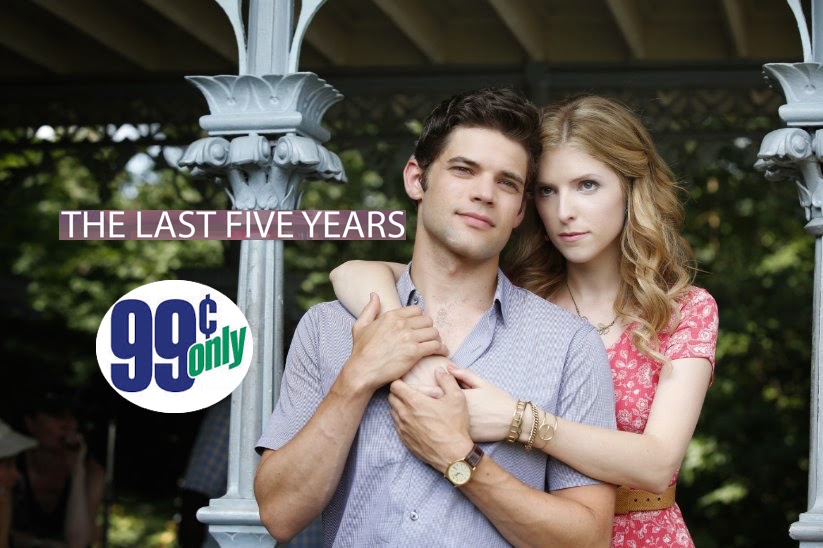 Grab your handkerchief and hold your lover tight my friends ’cause iTunes is plucking those heartstrings this week with sing-songy tearjerker, The Last Five Years.

Adapted by Richard LaGravenese from Jason Robert Brown‘s 2002 musical of the same name, The Last Five Years tells the story of struggling actress Cathy (Anna Kendrick) and burgeoning novelist Jamie (Jeremy Jordan) as they fall in and out of love over…you guessed it…a five year span.

The opening scene tells us that love is on the rocks for the couple as Cathy weepily sings…yes, the story is told 99% through song…that, “Jamie is over and Jamie is gone.” So, who is Jamie and where did he go? Will he come back? And why should we care? Don’t worry. The who, wheres, and whys are the sinew of the story as The Last Five Years weaves in out of the minds and hearts of its young lovers and ultimately dares us not to fall in love.

I’d tell you more, but there’s not much to tell with The Last Five Years. Beautiful people sing lots of clever songs. There’s some dancing in there too. Ups and downs and even some (sort of) sideways tales unfold as Cathy and Jamie sing their way through their fumbling attempt at real-life relationship stuff. Can sappy songs and the power of love transcend all?

Over The Last Five Years‘ 94 minute runtime we struggle to find a reason to care…or anything interesting at all about these two frisbee-thin characters. 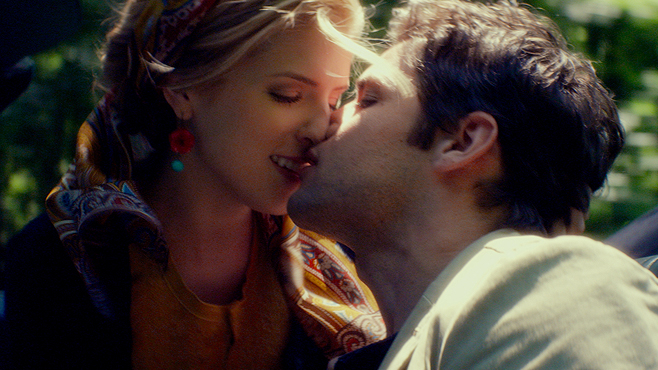 Ok. I am not a big fan of The Last Five Years. But that has nothing to do with my personal feelings about musicals. No, I don’t hate them. Quite the contrary. Good musicals are quite a lot of fun. I would have no problem listing Moulin Rouge! (2001) as one of my all-time favorite films and I once wrote a term paper about Singin’ In The Rain (1952). No, I don’t love musicals either. I just stick to really, really good ones. In my professional opinion, there have only been a couple of those in cinema history…and The Last Five Years wouldn’t even crack the top 20.

So, what’s the problem? Let’s start with those singers.

Jeremy Jordan…or as I like to call him – the vapid-hole-where-an-actor-should-be in this story. Not surprisingly, Jeremy got his start in television. He would have been right at home in an episode of Glee, but I guess he couldn’t cut it in high school. Instead he found himself on the short-lived NBC series Smash. Remember Smash? Me neither, but apparently Jeremy sang a bit on that show and that was enough to land him a spot in The Last Five Years. Yes, the kid’s got pipes. Sadly, he has absolutely nothing resembling charisma and that ruins any chance at chemistry with his talented co-star, Kendrick. Jordan tries and fails to bring anything interesting to Jamie. In his hands, the character becomes little more than a pretty face and a cheap cliche.

Anna Kendrick…ok, it’s a little harder to write anything too negative about Kendrick. She’s an obscenely talented actress that, in spite of her ties to the Twilightverse, has carved out an impressive (if overly musical) little niche in the film world. No, Anna Kendrick is not the problem with The Last Five Years, but I have to wonder why she was cast at all. Sure, Kendrick has the voice to play Cathy, but she lacks that loser’s edge. Cathy is written with all heart and no talent. Her professional failures are meant to mirror her personal downfall. We need to see that reflected in Cathy’s very being, but Kendrick plays her a little too bright and a little too perky. Kendrick is just too gifted to pull off all that failure. What we end up seeing in Cathy is not a reflection of a real person struggling with real life, but a successful actress trying to portray what it’s like to be a struggling actress. At age 29, Kendrick has been in the spotlight for years now. She maybe didn’t struggle long enough to capture the essence of Brown’s songs of failure.

And how are those songs? Well, their writer/composer Jason Robert Brown is a Tony winner…but not for The Last Five Years. That’s not to say that the songs are bad, ’cause they’re not. They’re mostly just underwhelming. When I think of musical cinema I think of Come What May from Moulin Rouge!. It’s a show-stopper, the definition of grandeur. There’s nothing even close to that in The Last Five Years. Composed mostly with little more than piano accompaniment, Brown’s music just feels small in the realm of his grand emotional landscape. I needed him to go big, if only once. Yes, there are a couple of good songs in The Last Five Years…but nothing grande. Not even a bar I could hum even minutes after the credits rolled.

That being said, Brown has written a clever little play with some well-executed moments. Of course, this is an adaptation of that play, and therein lies many of the film’s problems. Written for the screen and directed by Richard LaGravenese, The Last Five Years just doesn’t translate. There’s a charm to theater that you just can’t duplicate on screen. Things just move differently on a stage. I’m sure Brown’s songs land perfectly in the back of a 100 person theater, but they do not carry off of a movie screen and LaGravenese fails to find space for the music to breathe. Songs seem to start even before we’ve had a chance to digest its predecessor and the emotional core of The Last Five Years nearly collapses under the pressure to keep singing.

This is the first musical venture for LaGravenese and his lack of experience shows. He doesn’t have the right sense of pace or staging for musical film and he never finds any rhythm in Brown’s music or lyrics. In adapting The Last Five Years, he gets just about everything wrong. 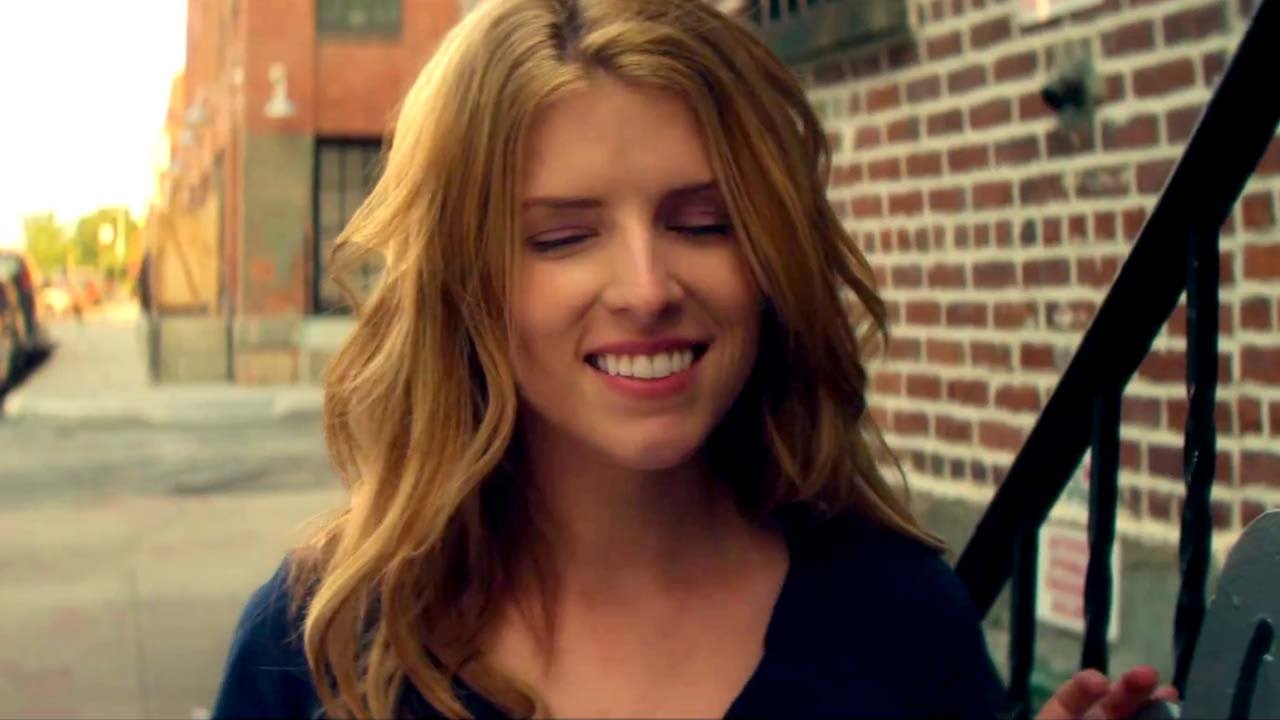 And the One Thing That Didn’t Go Wrong

Buried inside Brown’s backlog of sappy love songs and weepy breakup songs is a narrative device that makes The Last Five Years interesting viewing in spite of its many shortcomings. The play is told from the alternating points-of-view of Cathy and Jamie. Cathy’s story begins at the end of the relationship, while Jamie’s story starts at the beginning. In a stroke of genius, Brown has the stories intersect smack in the middle of his play. It comes at a seminal moment in the couple’s lives and gives the viewer the feel that this is the only genuinely shared moment in the entire relationship. For a moment, before and after no longer matter, even if we still need to experience them.

Luckily, LaGravenese had enough savvy to keep Brown’s overall structure intact. While the narrative games are a little confusing on film, the execution and effect of that shared moment is nothing short of magical and damn near saves the show.

Sadly, one magic moment does not a great film make. It doesn’t even make a good film, and The Last Five Years is not a good film, so save your $0.99 this week. If you are just dying to give Apple some of your money, you can rent Moulin Rouge! for the fabulously reasonable price of $3.99. Oh, and if you are hellbent on spending time with Anna Kendrick this week, I’d recommend you catch her in Joe Swanberg‘s little films Drinking Buddies (2013) and Happy Christmas (2014). Those two gems are ready and waiting for your viewing pleasure over at Netflix.