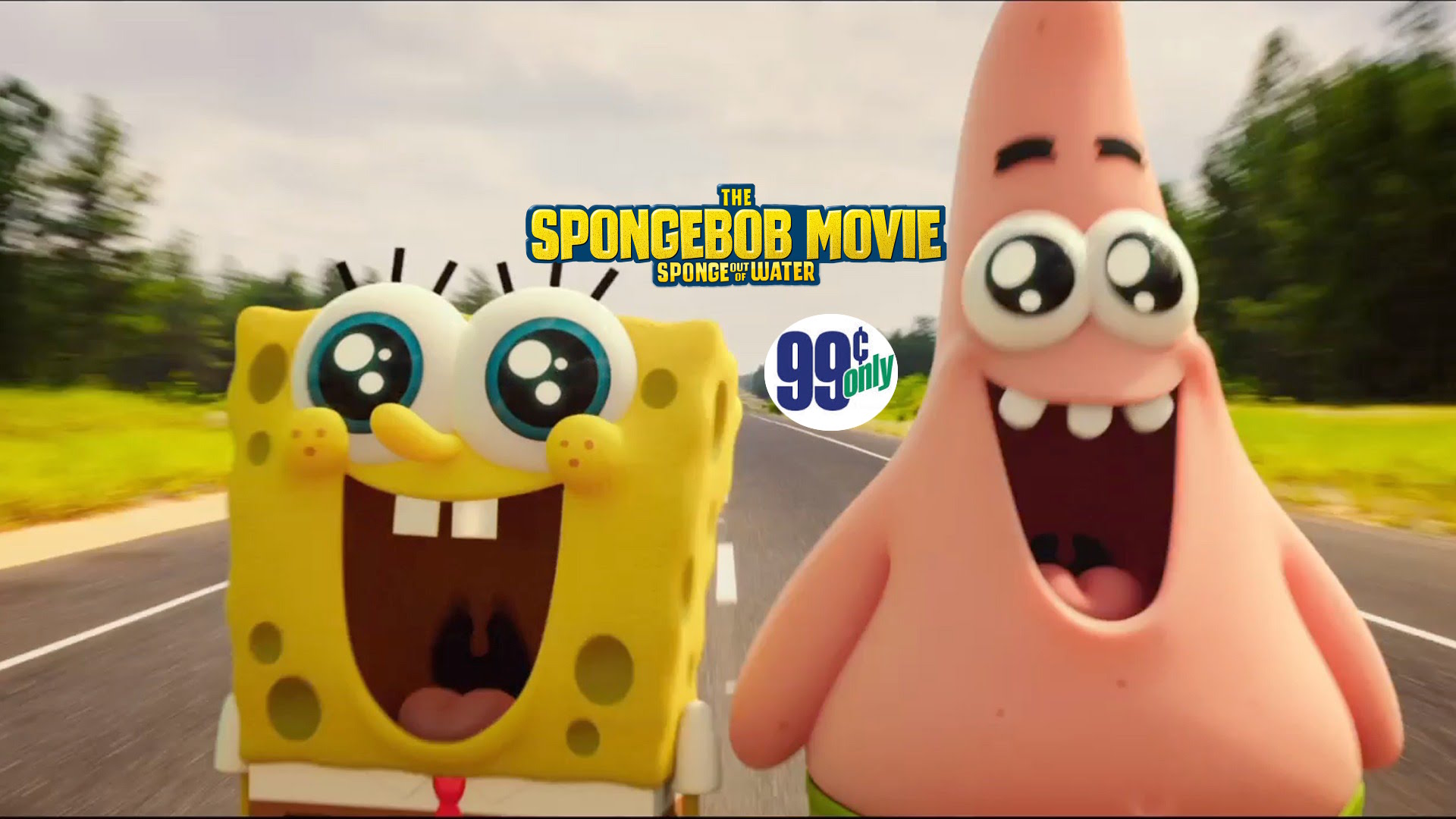 Well, can’t say I saw that one coming, iTunes. Alright secondary characters, come with me as we visit Bikini Bottom and beyond in The SpongeBob Movie: Sponge Out of Water. 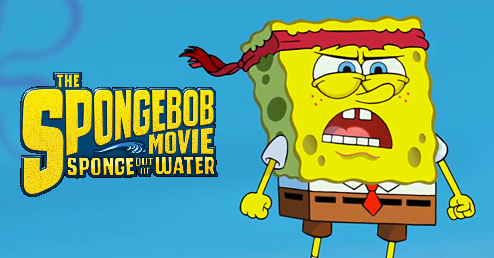 Once Upon A Time

Pineapple under the sea, Bikini Bottom, Krabby Patties…Sponge. If you’re reading this review, I’m going to assume you know all about SpongeBob SquarePants. If you don’t, those bits of information are all you’ll need to enjoy The SpongeBob Movie. Clever, heartfelt, and at times laugh-out-loud funny, this latest chapter in SpongeBob’s eternally wacky life is fun for the whole family. It’s also one of the best stoner comedies in years.

The SpongeBob Movie (the series’ second, though it’s not a sequel) begins with a pirate named Burger Beard  (Antonio Banderas) stealing some sort of sacred text. We don’t know what he wants with the book but he’s a pirate, so he’s probably got an angle. Spoiler alert: he does. But when Burger Beard begins reading the book we find ourselves entering a story about Bikini Bottom. Off we go into the daffy world of SpongeBob where an epic food-fight is about to break out. In a last ditch effort to achieve his life’s ambition of stealing the secret Krabby Patty formula, villainous Plankton pulls out all the stops. Planes, tanks, and robots prove no match for condiments, but somewhere in the battle the Krabby Patty formula mysteriously disappears. Without their beloved Krabby Patties to bind them together, the citizens of Bikini Bottom quickly turn on each other. In a blink, Bikini Bottom goes all Mad Max: Fury Road (2015), leather chaps and all…though some prefer suede.

Only SpongeBob stands in the way of total anarchy. Enlisting his sworn enemy Plankton and a ragtag band of his friends, SpongeBob leads an expedition to find the magical formula and save Bikini Bottom from post-apocalyptic doom. Action, adventure, and hilarity ensue as the motley crew hits the road, and eventually the real world, in their quest. Can SpongeBob save the day? Will order be restored to Bikini Bottom? Will there be cotton-candy?

Well, of course! What sort of movie do you think this is? 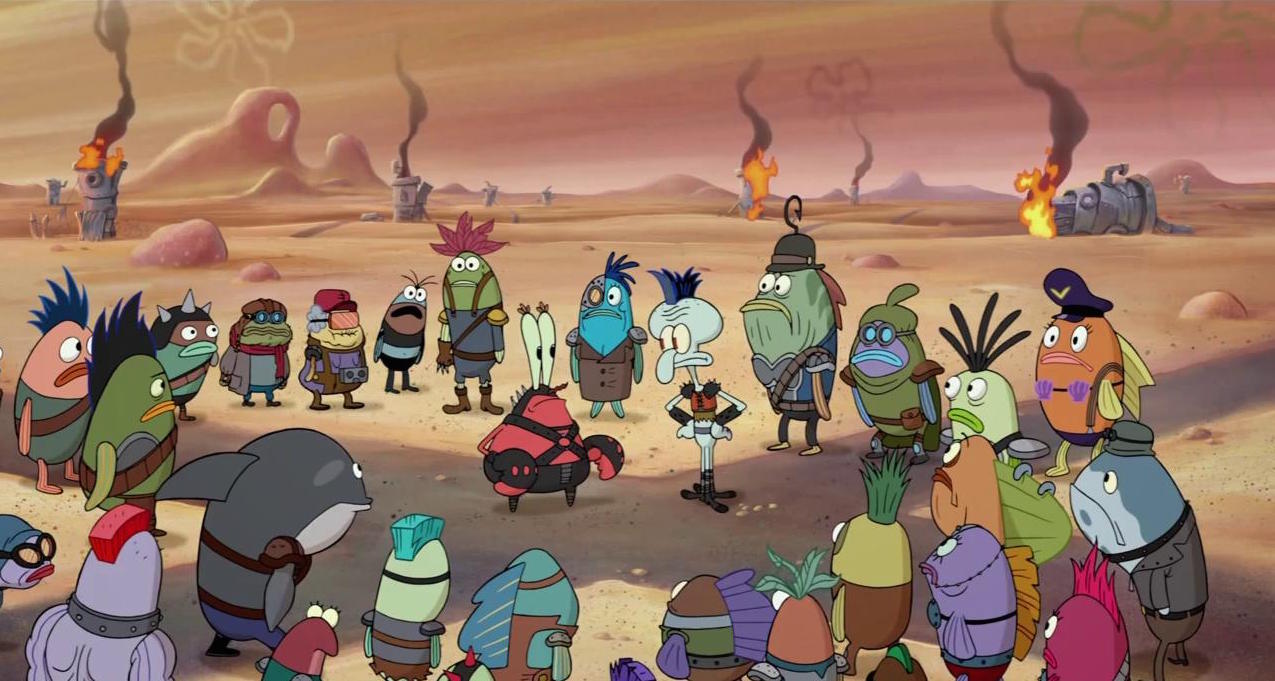 It’s So Sweet In Here

Generally, TV shows do not translate well to the big screen. Moviefied, they just feel like haphazardly extended episodes of the series. Even The Simpsons Movie (2007) suffered this same fatigue. SpongeBob looks to be the exception to that rule. Written by Jonathan Aibel and Glenn Berger (based on a story by creator Stephen Hillenburg), Sponge Out of Water wisely abandons the constraints of the wildly popular Nickelodeon show and creates a language all its own. Structure and form give way to whimsy and the result is a film closer to Harold & Kumar (2004) than a kid’s show…straight down to an insanely funny, sugar induced “acid” trip and a look inside the frighteningly sweet brain of SpongeBob. No idea is too broad or too low as Sponge Out of Water jaunts here and there with almost no connecting fabric. Still, Aibel and Berger provide just enough string to pull kids and adults along for a seriously silly ride.

Yes, adults will delight in the gooey, trippy, sometimes wildly irreverent comedy in The SpongeBob Movie, but make no mistake, this is a movie for kids. True to form, there are important life lessons to be learned. Teamwork, sharing, and forgiveness all take center stage as SpongeBob and friends bungle their way forward. But the film is so cleverly written and briskly executed you don’t realize that lessons are being taught. Those moments never feel preachy or even cheap as characters actually learn their lessons and learn from each other. There’s a genuine sense of wonder at play throughout the film, mostly because SpongeBob is so perpetually nice. Seeing the world, drawn and otherwise, through his earnest eyes at once inspires melancholy (that we can’t all see the world that way) and awe (that the world still can be seen that way…even by adults).

Those conflicting feelings are largely the result of Director Paul Tibbitt staying true the gorgeously hand-drawn look of the show and mixing in a healthy dose of CGI. You can’t see all that hand-drawn beauty without missing the style a bit (this is the first feature film in nearly five years to feature hand-drawn animation). But the madcap CGI trip into the real world is so alive with ideas you can’t help but delight in the possibilities. How would Patrick react to an ice cream cone larger than he is? What would Sandy (a squirrel) look like in that world? What would Squidward look like with six-pack abs? The laughs are too many to list and I wouldn’t dream of ruining a second of this silly little movie for you, so I’ll go ahead and wrap things up.

Though I should mention the spectacular work from an extraordinary vocal team. As a cast, they’ve been doing it for nearly twenty years now and that experience shows. Every joke lands and every moment feels natural. Even if the moment does feature a sponge…who wears pants…square pants. 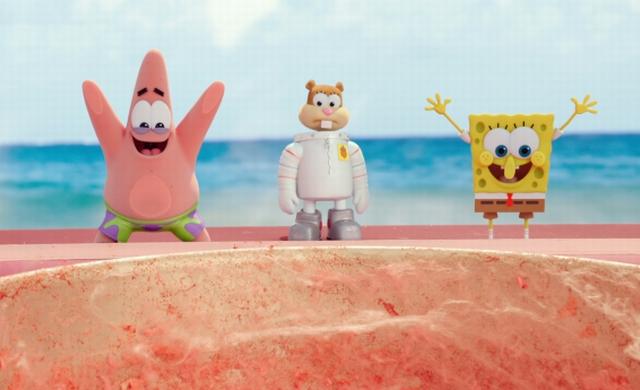 You bet. Sharply written and alive in a way that most animated films never even dream of, The SpongeBob Movie is well worth that $0.99 this week. Watch it with your children, watch it with your nieces or nephews, or watch it with your buddy at 3am. The effect will be the same. Laughs and more laughs and then a great big warm fuzzy feeling deep down inside. Who would’t pay a buck for that?