This week, we find Arnold Schwarzenegger flexing his acting muscles as Abigail Breslin’s tender-hearted father and protector in Maggie. But why does Maggie need protection? 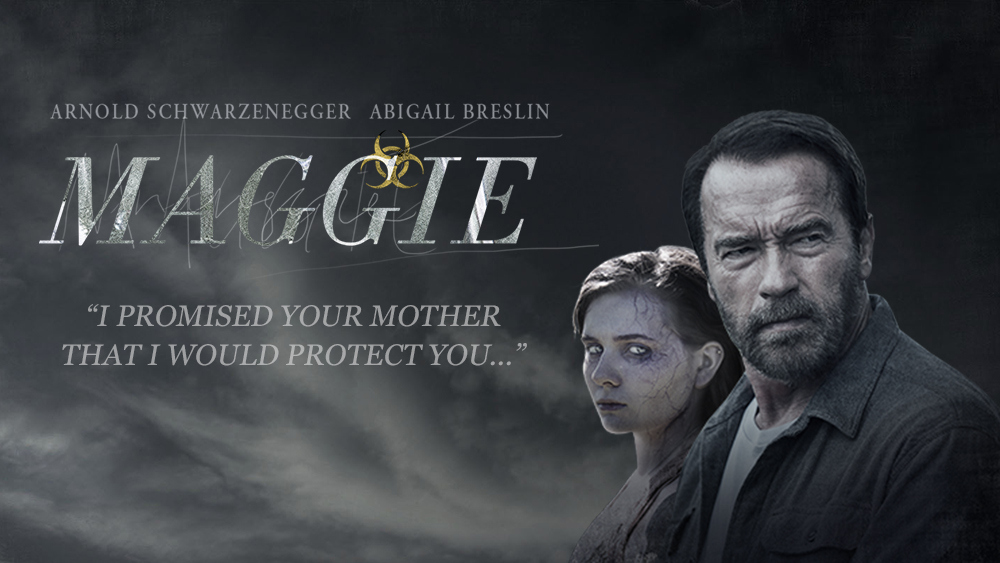 We meet Maggie Vogel as a whispery voice leaving a heartfelt voicemail for her father, Wade. She’s going to the city, she says, in hopes of protecting her father and her family. She weeps through an apology and a heartfelt, “I love you.” We find out soon enough why Maggie has run off. The world has gone to ruin in the wake of an infectious outbreak that turns people into flesh-hungry zombies. As radio news reports detail the declining state of society, Wade Vogel passes through a barren, burning wasteland on his way to the city. He says not a word, but we understand why he’s going.

Infected and on the verge of quarantine, Maggie has landed in the safe confines of an emergency room. Imparting a hearty word of warning, Maggie’s physician releases her to her father. Wade hopes she can at least live out her remaining days in the peace of her own home. With a festering bite-wound on her arm and a ticking clock in her veins, peace will not come easy. A weary community keeps watchful vigil over the soon-to-be-walking-dead teen as Wade struggles to keep the outward threat at bay, even as a dire threat grows under his own roof. Majestically photographed and artfully constructed, Maggie is a high-minded zombie film that’s unafraid of big ideas. But a ham-handed screenplay and one dreadfully dull performance do little to explore them, and this intriguing dissection of loss loses its pulse before it ever had a chance to live. 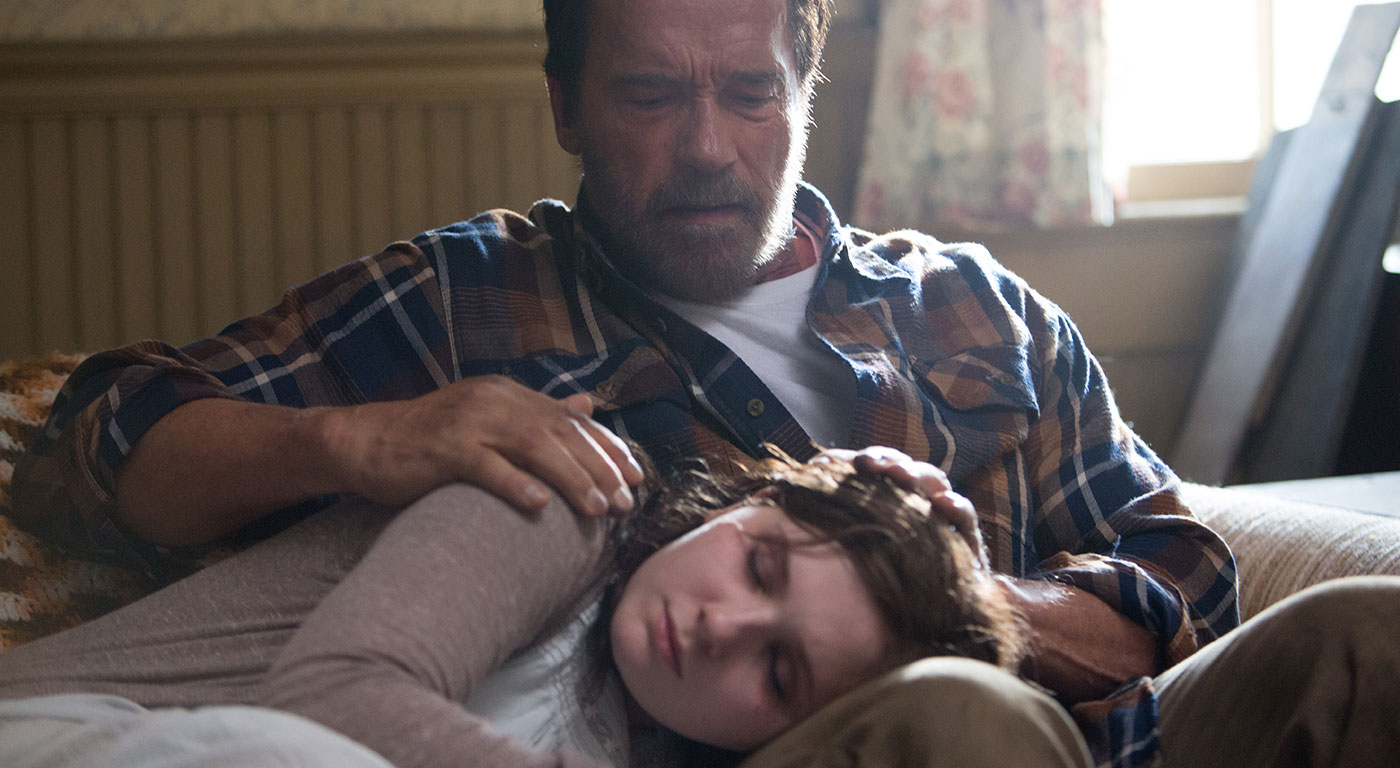 “Stop Picking at It”

Ok, let me just put this out there and be done with it: Arnold Schwarzenegger is NOT an actor. At this point, he’s barely a movie-star. Before I could consider viewing Maggie as a legitimate art film or a clever piece of pop entertainment, I had to consider the question, “how did The Governator end up here?” I suppose it makes sense to cast the enigmatic action star in the role of protective/doting father out to save his daughter. He’s played that part frequently and violently in the past (usually as an ex-soldier or CIA agent). Hoping to subvert audience expectation, Director Henry Hobson takes the familiar set up and flips it on its head. There are no clever one liners or heroic poses in Maggie. Wade is no hero. He’s just a muscular, world-weary Kentucky farmer who cares deeply for his estranged daughter and often carries an axe (there’s so much wood to cut in the apocalypse). As far as the story goes, there’s fertile ground in the tragic tale of a man trying to make sense of his twisted up emotions in a twisted up world. But it’s hardly the right field for an aging Austrian action star.

Still, you have to admire the director and his star for taking such a calculated risk. For about five minutes the gamble pays off. Behind a gruff beard (action-star character-acting) and haggard demeanor, Schwarzenegger’s introverted everyman mesmerizes in the film’s quiet opening moments. But then he starts talking and the spell is broken. For the remainder of Maggie‘s 88 minutes, the eternal Terminator lumbers through scenes and fumbles over lines while failing to hint at anything resembling a human emotion. About halfway through Maggie I found myself wondering if he’s ever had one.

Not that Schwarzenegger has much to work with in Screenwriter John Scott 3‘s (never trust a man with a number in his name) clever, but desperately flawed screenplay. Credit where credit is due, Scott 3’s set up for Maggie is compelling and original. Having witnessed hundreds of nearly instantaneous zombie “turns” over the years, it never occurred to me how devastating the change could be if it happened slowly. How would a human react if they knew what they were becoming and felt it happening? In spite of Scott 3’s tin-eared dialogue and over-orchestrated melodrama, Maggie comes close to achieving its heartbreaking goals. That’s principally due to Abigail Breslin’s ability to make the fear and pain palatable as Maggie’s mind, body, and soul cycle through the slow process of decay. As she begrudgingly gives way to the rueful hunger inside, Breslin’s slow burn of a turn takes Maggie to the dark, hopeless places promised in the film’s grim premise. But then Scott 3’s script falters with a needlessly sentimental, easy to swallow ending and Maggie‘s slow burn simply burns out.

Despite a flawed script and an inability to coax a convincing performance from Schwarzenegger, Hobson manages to craft a stylistically complex film. Avoiding silly horror tropes, Henry’s and Editor Jane Rizzo‘s meticulously paced film elegantly blends David Wingo‘s foreboding score with Cinematographer Lukas Ettlin‘s gloriously ghostly imagery. Maggie is a film that wants to live in the quiet, eerie moments between thoughts and actions. But quiet moments require emotive actors. Despite his admirable efforts, Schwarzenegger is simply not up to the task and Maggie limps through its fertile emotional terrain like a zombie on crutches. 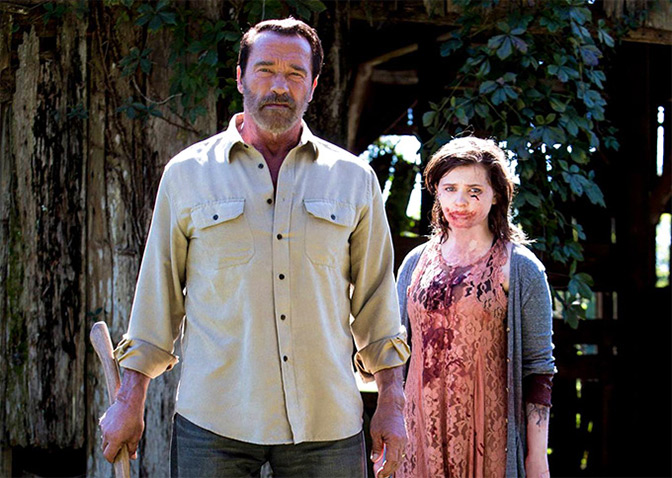 For all of its artistic aspiration, Maggie is not a good movie and not worth your dollar this week. If you’re jonesing for some zombie action, just watch this week’s stunning episode of The Walking Dead again. But if you’re down for something a bit more ambitious, head over to Netflix and have a look at Ain’t Them Bodies Saints (2013). Featuring fierce, introspective performances from Casey Affleck as an outlaw and Rooney Mara as his wayward moll, the film is also edited by Jane Rizzo. That makes it a stylistic second-cousin to Maggie. There are no zombies, but sometimes a daring story and a poetic heart are just more interesting. See?