The iTunes 99 Cent Movie Rental Of The Week: ‘Every Secret Thing’ 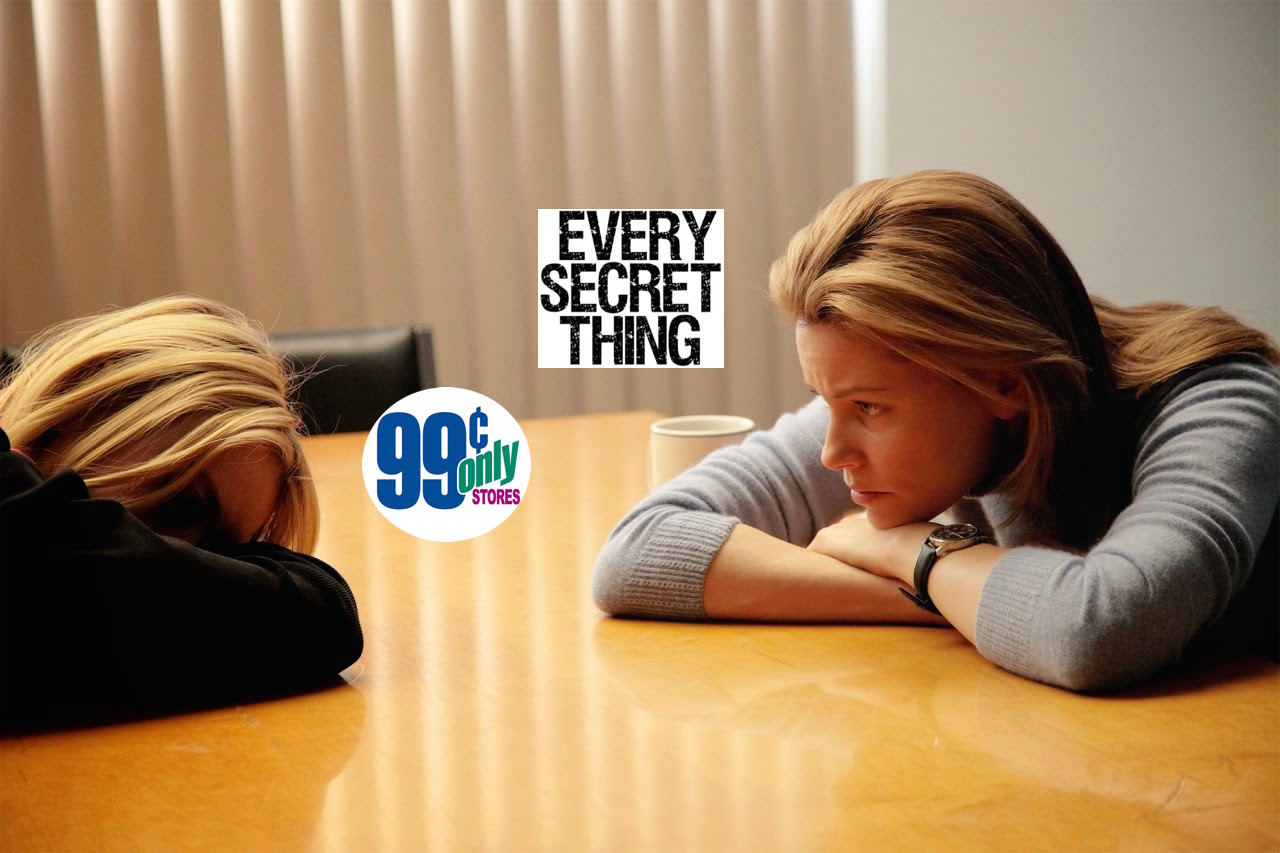 Oh, iTunes…how could you? This week, Elizabeth Banks and Dakota Fanning glower their way through the laughable melodrama of Every Secret Thing. 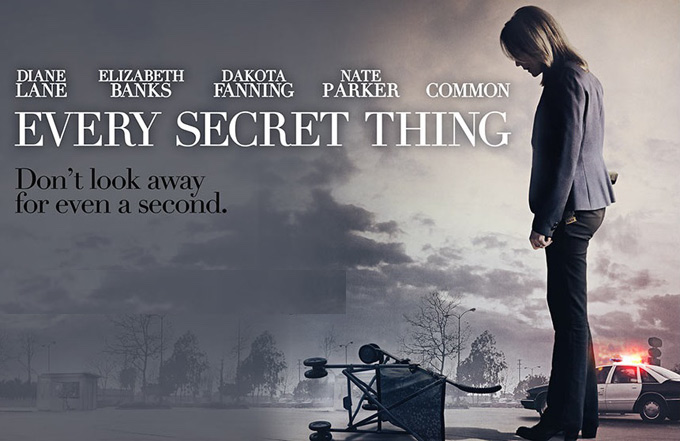 Life is not easy for 11 year old outsiders Ronnie and Alice. Picked on and laughed at, the pair are forced to hang out together by Alice’s Mom (Diane Lane), who carries a special affection for Ronnie. After a birthday party disaster, the unmoored pair find themselves adrift on the long walk home. When their path brings them across a crying, untended baby, they take an inexplicably dramatic wrong turn and commit an unthinkable crime.

Jump ahead seven years. Ronnie (Dakota Fanning) and Alice (Danielle Macdonald) are all grown up and fresh out of Juvey. Life hasn’t gotten easier for the reprobate duo as they struggle to re-adjust. In a tragic coincidence, a 3 year old girl has just gone missing in their town. Coincidence, you say? Enter Detective Nancy Potter (Banks). Sullen and moody, Det. Potter has a painful-yet-specific connection to the investigation that cost Ronnie and Alice seven years of freedom. This new missing person case may be just the thing to pull every stitch clean from Nancy’s old wounds. With virtually no prompting and even less evidence, Det. Potter sets her gloomy gaze on bringing Ronnie and/or Alice to justice for a crime that she’s pretty sure they may have committed.

Will Det. Potter find the missing girl? Did Ronnie and Alice get out of Juvey only to commit another unspeakable crime? Will viewers be able to follow all of the flashbacks and “shocking” plot twists? Will anybody convince Dakota Fanning that dark eye shadow is not the only way to convey a deeply troubled soul? All this and more will be revealed in Every Secret Thing, a film whose only secret may be how it missed a fall release on Lifetime Movie Network. 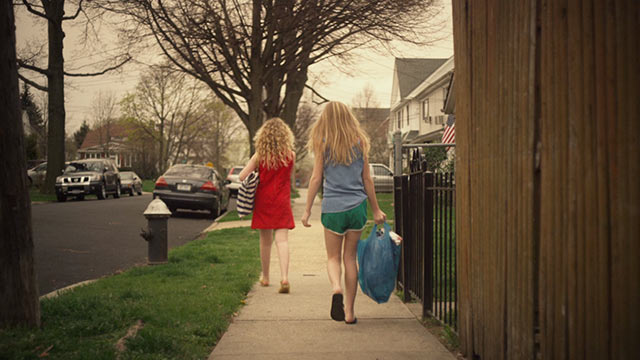 “I Thought I Could Handle It”

Blame pushes and pulls at every relationship in Every Secret Thing. Trust me, there’s plenty to go around. The same could be said for the film itself, but where to start? The actors, maybe? Elizabeth Banks is decidedly serious. So is Diane Lane. Dakota Fanning, too. Danielle Macdonald has a bit more fun than her cast-mates, when she’s not too busy being all serious. At least Macdonald has the excuse of being a relative newcomer. Banks and Lane are seasoned professionals by now. At the ripe old age of 21, Fanning has been in the game over a decade. There’s no excuse for the lack of emotion or texture in their collective performances. Every Secret Thing does have an intriguing setup after all, even if it mines territory better executed in films like To Die For (1995) and Prisoners (2013). With the slightest bit of soul from its leading ladies, Every Secret Thing may have been interesting. Interest aside, even professional actors need direction. Safe to say, the ladies of Every Secret Thing received very little from Director Amy Berg.

To her credit, Berg worked exclusively on documentaries prior to Every Secret Thing. This film is Berg’s first go-round with real actors. Her inexperience shows as many “actorly” instincts (Banks’ flat line reading, Fanning’s dead stare, and Lane’s melodramatic mother) are left unchecked as their characters disintegrate into ridiculous cliche. In a story where secrets are buried in deep dark places, it’s important to know that light can be cast upon them. Berg’s film needed a ray of light. The static performances offer not even a sliver and Every Secret Thing loses itself in the very abyss that it creates.

“Even Good Parents Lose Their Kids”

As a Documentarian, Berg crafted a couple of hard-hitting, stylistic beauties in Deliver Us From Evil (2006) and West of Memphis (2012). A subtle blend of style and substance allowed those films to resonate and sit firmly under your skin. The great hope was that Berg could bring that style to Every Secret Thing. In the film’s peacefully unnerving opening sequence, Berg succeeds. But it all falls apart before the opening credits roll. Turns out, documentary and fiction are very different beasts. The same techniques that made Berg’s previous work so penetrating, drag Every Secret Thing into a murky narrative realm. Particularly annoying is the incessant use of flashback as a key storytelling device. Time is fluid in a documentary. The truth can be told in any way, shape or form you like…so long as you tell it. In this context, flashbacks never feel like flashbacks. Fiction is a little dicier. Time is still fluid, but viewers are more in tune with the tricks. You have to sell a lie…and you had better be convincing. Berg and company execute their flashbacks so poorly in Every Secret Thing that they feel like reenactments and not part of the narrative. In Berg’s hands, these embarrassing scenes have the tragic effect of distracting you enough that you lose interest in the vital information being divulged.

Of course, directors are only as good as their script and Berg did not get much help from Screenwriter Nicole Holofcener. A writer/director with a near impeccable track record, I was beyond excited when Holofcener’s name rolled through the credits. My excitement faded to disillusionment about five minutes later. How could a gifted filmmaker like Holofcener miss the mark so badly? In her adaptation of Laura Lippman‘s novel, characters and story arcs are almost irrelevant, dialogue is laughable and those damn flashbacks make Every Secret Thing nearly unwatchable. Holofcener is a gifted storyteller, so it’s hard to lose too much faith in her abilities, but wow did she help make a mess of this film. 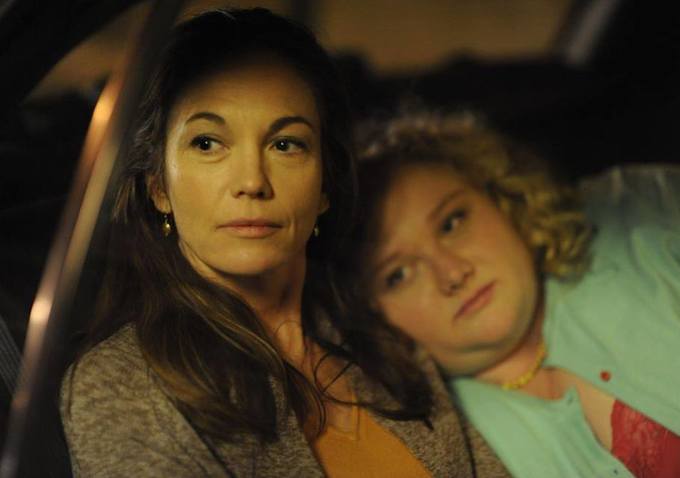 I read an unsettling article this afternoon in Vanity Fair about inequality in Hollywood. Their claim is that for every 2.3 males with speaking roles in film, there’s roughly 1 female. In that context, I’d like to shove Every Secret Thing (female writer, female director and 4 female leads!!) right down Hollywood’s throat…but it’s just so bad. No, I cannot recommend spending $0.99 on this empty, train wreck of a film. You’ll have more luck with Berg’s West of Memphis or pretty much anything else Holofcener has been involved with, especially Friends With Money. Those films will cost an extra greenback or two, but you’ll have much more to show for your time.