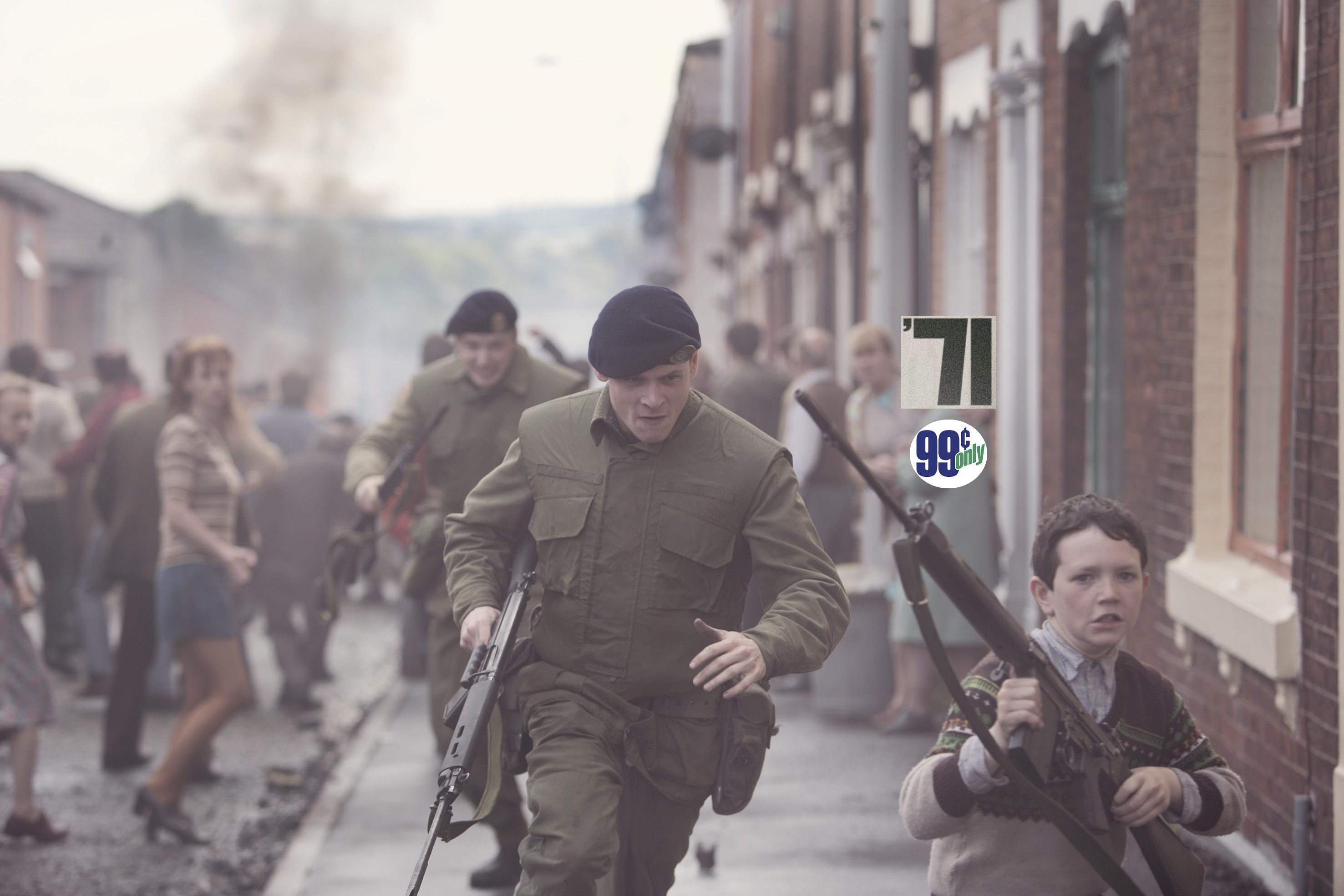 This week, iTunes takes us behind enemy lines and deep into the heart of “The Troubles” of Northern Ireland with ’71. 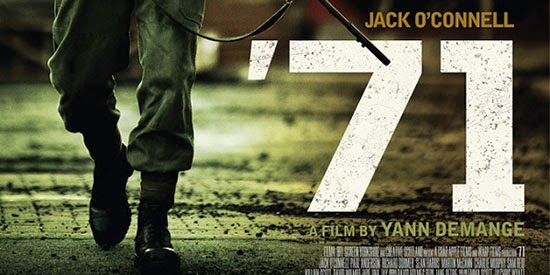 “It Was A Confused Situation”

As “The Troubles” brought daily warfare and rioting to the streets of Belfast, 1971 became one of the bloodiest years the city would ever see. While Catholics (nationalists) and Protestants (unionists) waged a seemingly endless turf war against each other, the lines between right and wrong burned along with so many bombed out cars. Tensions were only heightened as British military forces roamed the streets with an air of righteousness and some highly questionable peacekeeping methods.

’71 opens with one of those regimens putting the wrap on basic training. Among the recruits is a thick, quiet lad by the name of Gary Hook (Jack O’Connell). Displaying a deep sense of pain behind piercing blue eyes, Gary is tough in a compassionate sort of way. He could kill you with his bare hands, but he’d rather pat you on the back and be on his way. He’s hardly happy with the news that his unit is being deployed to war-ravaged Northern Ireland.

Under the command of newly minted Lt. Armitage (Sam Reid), the inexperienced regimen’s first mission in Belfast is meant to be “quick and surgical.” All does not go as planned. As Irish officials brutally interrogate an alleged conspirator, an angry mob gathers in the street. Shouting escalates to shoving. When shoving turns to rock-tossing, Gary and Co. realize they are badly overmatched. Chaos erupts and the regimen calls retreat. In the madness, Gary is left behind. Thus begins the longest night of his life as Gary sets his mind to the singular task of staying alive. Can Gary survive the night in a city where he is enemy to all? With Belfast’s volcanic, politically charged environment as its backdrop, ’71 deftly blends Gary’s human tragedy into the chaos around him and finds a vastly rewarding human story in the process. 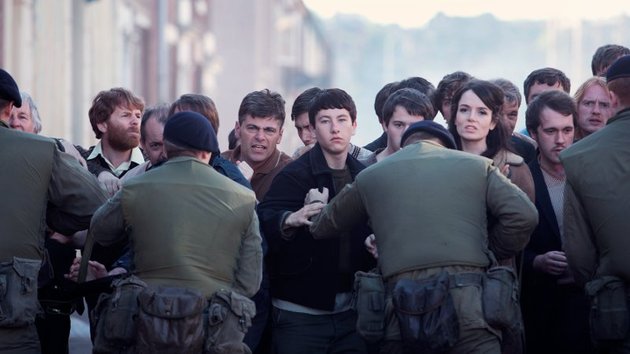 “Confused, To Say The Least”

Though not based on any one story or event, ’71 has the feel of historical document. Director Yann Demange‘s first feature could play on a magnificent double-bill with Paul Greengrass’s Bloody Sunday (2002) and viewers unfamiliar with Northern Ireland’s tortured history wouldn’t be able to tell you which is based on real events. Where Greengrass focused his film on a single, deplorably violent event, Demange is more concerned with the vicious cycle that bred the violence itself. Hatred is something witnessed, something learned. Every act of violence and kindness in ’71 comes with a cost and Demange refuses to let anyone off the hook … it is war after all.

Given the explosive nature of its content, ’71 is a startlingly restrained film. Demange displays a natural feel for pacing while Gary’s nightmare unfolds. From the first moments in Belfast, a proper sense of dread flows through the film’s narrative. Soldiers and citizens alike seem to understand implicitly that everything will go wrong, but they’re equally resolved to find out just how wrong. Moments build and boil over, but Screenwriter Gregory Burke’s exquisitely crafted script finds an alarming sense of calm in their wake. With nowhere to go and nobody to trust, it’s only a matter of time until things get worse for Gary. Once the erstwhile soldier is on his own, Demange keeps ’71 moving at a rabbit’s pace as Gary stumbles from one lion’s den to the next. For his part, Cinematographer Tat Radcliffe keeps his camera fluid and always on the move, even in the film’s quieter moments when Composer David Holmes’s eerily stirring score keeps the story on edge.

It’s the quiet moments in ’71 that elevate the film above droll action piece. Those moments succeed largely due to the efforts of star Jack O’Connell. If that name is not familiar to you, write it down, because it’s going to be mentioned a lot in coming years. After piddling away for the better part of a decade in secondary roles, O’Connell made a bit of a name for himself in 2013 with his frighteningly ferocious performance in David Mackenzie’s wonderful Starred Up. O’Connell followed that beastly role with this film. Here the thespian keeps that savage energy buried beneath Gary’s surface for the entirety of ’71. Gary is a fighter, but not a hero. The resulting performance is so natural that it never feels like acting. Credit Burke’s screenplay (again) for allowing Gary about 10 lines of dialogue in the entire film. A shift in gait, a distant stare, even a small move of the hand are enough for O’Connell to convey every thought and emotion necessary to tell Gary’s tale.

O’Connell is surrounded by an equally understated supporting cast of largely unknown actors. The supporting team is headed by a mesmerizing Sean Harris as an MRF (British Counterinsurgency) agent with suspect motives. Harris has been doing yeoman’s work in supporting roles for years now (most recently opposite Tom Cruise in Rogue Nation) and dials up the weaselly tenacity once again for ’71. Here, his sketchy agent provocateur provides an elegant counter-balance to O’Connell’s earnest everyman. The two share only one scene together, but it feels like they are battling throughout. That same conflict of distance is what tethers Gary to almost every character in the film and binds them unwittingly to their own humanity. 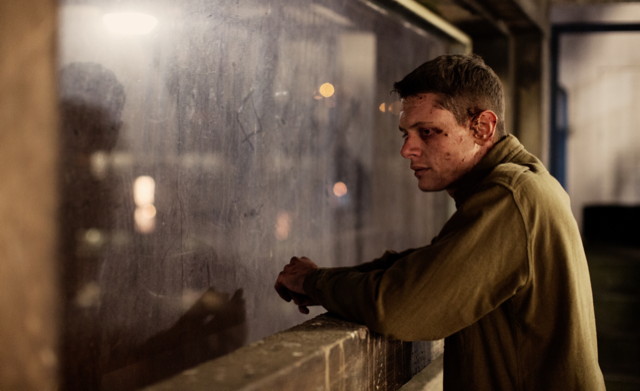 Absolutely. With its breathlessly executed story and beautifully understated performances, ’71 is a must see. You’d be hard pressed to get more mileage out of a single dollar this week. More than a movie, ’71 stands as a haunting document of a dark time and a dark place where people made of the world what they wanted. That’s not always a good thing, but it’s still a world we shouldn’t soon forget.